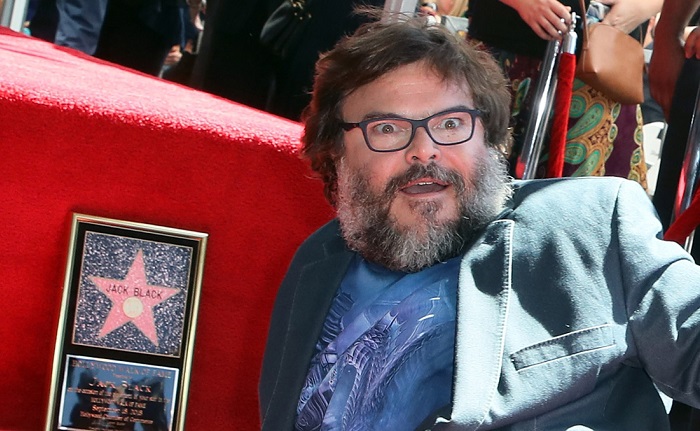 School of Rock star and human-cannonball-of-energy Jack Black accepted a star on the Hollywood walk of fame in a lavish public ceremony yesterday, and couldn’t resist a cheeky dig at the President whilst he was at it.

In his acceptance speech to the crowd, Jack mused appreciatively on the honour, saying “I’ve wanted one of these things for so long. Since I was a kid I thought ‘Oh man, if you get one of those stars on the sidewalk that means you’ve made it’. And I feel like I’ve finally grasped that sweet brass ring. In the immortal words of Axl Rose; ‘Where do we go now?'”

Black then continued to sing a few bars from Guns ‘N Roses’ 1987 hit Sweet Child O’ Mine in the raspy, hard-rocking affectation he’s famous for, before laughing and asking the crowd “I’ve got the thing! Why continue? I made it!”

The jovial comedic actor and Tenacious D musician assured those gathered that he’d return for a sequel to last year’s Jumanji: Welcome to the Jungle, and one final entry in the popular Kung Fu Panda franchise, but noted that “It’s time to pass the torch to the Uzi Verts and Lil Peeps and… the Tommy and Sammy Blacks of the world,” he smiled, looking off to his two sons.

“Unless something really cool comes around … I love you all so much. Except for Donald Trump’s a piece of shit! Peace out, love you!”

Jack Black can next be seen in Eli Roth’s The House With A Clock In Its Walls, which releases into UK cinemas this Friday, rated 12A.