Online series are growing in popularity recently with the development of programmes such as Netflix original series Daredevil and Better Call Saul. However, Netflix is not the only format for producing an online series and a number of film makers are turning to producing series for Youtube. This effective way to provide short, immediate drama has become an attractive way of film makers getting their work known. This is one opportunity director Paul Dudbridge has taken advantage of. His sci-fi series Horizon launched on Youtube on October 5th with an episode airing each weekday evening until tomorrow.

Set in Bristol, the series opens just after a car crash. As the people involved try and come to terms with what has just happened, it suddenly becomes very apparent that the accident is the least of their problems as they spot an alien craft hovering over the city of Bristol. It turns out to be a very bizarre day. Horizon follows the plight of 5 people as they try and make sense of what is happening. They can’t leave the city due to mass hysteria and their best bet may be to stick together. In such a highly charged situation, their relationships will be put to the test and loyalties will be challenged as they try to survive, and figure out why these otherworldly visitors are here.

Horizon is set to provide short sharp bursts of science fiction drama that are effective and entertaining. With each episode being roughly 6 minutes long the series is unique in its approach to the subject, yet despite the shortness of the episodes they feel well developed with impressive CGI. Movie talks to director Paul Dudbridge and actor Simon Pearce who plays Dan.

Movie Marker: Previous to working on Horizon, Paul you predominantly worked on short films such as Ashes and We May Be Shadows, what prompted your move from short films to mini-series?

Paul Dudbridge: Well, I like the TV drama format. I’m a big fan of House of Cards, The Walking Dead’ etc. Having that format but shorter as a web series appealed to me.  We liked the idea of using cliff-hangers at the end of an episode and making the audience come back for more. It seems to have worked! It’s something you couldn’t do with a film as a completed piece and only works being broken up in to chunks.  We have been asked about cutting the series in to one film for TV and we’re happy to do that, but it was written specifically with those suspenseful endings in mind.

MM: And for you Simon, what was it that attracted you to this project?

Simon Pearce: As a writer and co-producer initially, it was simply the idea of being able to do something that I might not normally get the chance to. I’ve made shorts and features before, and the road to distribution can be a long one, plus working as an indie you are sometimes limited as to what you can do. Like Paul, Chris Marshfield and myself, the other co-writer, have grown up on Hollywood blockbusters and classic action adventure films like Indiana Jones, Back to the Future and so on and this was an opportunity to make something in that vein, where we can crash planes, see spaceships, and blow up supermarkets, albeit in bite size chunks! On top of that we’ve often discussed how much we’d like to work on a long running TV show such as Lost or The Walking Dead, a format where you can follow a set of characters over an extended period of time and tease people with cliff-hangers. Again, this was our chance to do these things. And finally, it was something we could immediately put in front of an audience which is a big draw of doing a web series. With all that in mind, we couldn’t resist! It was a lot of fun sitting down together and hashing out the plot over the 10 episodes.

Acting in it as well was something that came later. I’ve always enjoyed acting, but long term it’s a career behind the camera I intend to pursue – specifically directing, and that is pre-dominantly what my background is in (I currently work freelance as an editor). Because I was very busy around the time we were planning to shoot, it was looking less likely that I was going to be able to set aside the time needed to prep episodes I might have directed myself, so Paul suggested I actually play the character of Dan. I was a little apprehensive at first, as I knew the caliber of some of the other people we were hoping to bring on-board, and I didn’t want to do it unless I felt I could do a good job of it. Whether I have is of course up to the audience to decide! As we continued to write though, I became more confident with the idea, and frankly knowing some of the things we were going to throw at these characters it became impossible to say no!

I really enjoyed the experience and as much as directing remains my end goal, I don’t think acting is something I will ever completely leave behind. 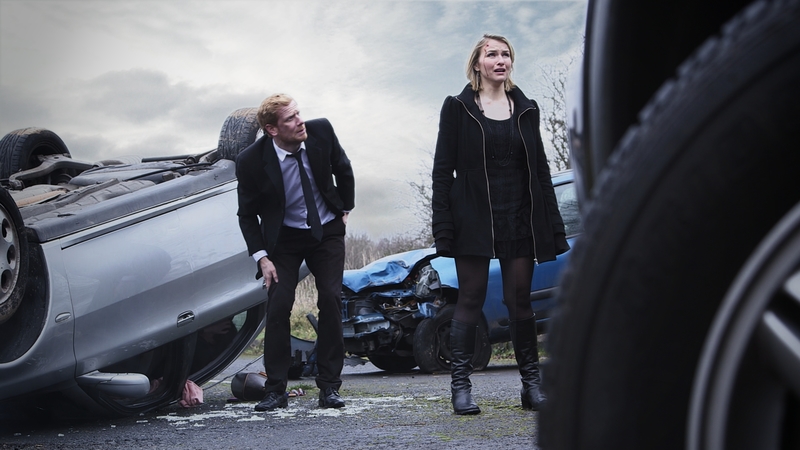 MM: Paul, your filmmaking career started with fantasy/horror short film Coldharbour. Since then your films have focused on more humanistic stories. What made you move to the sci-fi genre?

PD: I do like drama.  I like hitting those emotional beats in the characters and story and my past work has focused on that aspect.  I’m also a fan of sci-fi films and shows as well as action films so when the idea for this came up I thought it was a nice way of combining all those elements together.  At the heart of any story whether it’s sci-fi, horror or action should always be the human interest and successful films and shows in those genres are only better because of that.  I hope we pulled off trying to inject the drama underneath the sci-fi and action elements in Horizon.

MM: Simon, you have worked with some of the cast before on the film Dark Vision. Did this aid or hinder the performances of the cast? Did it help to build that bond between the characters or did it make it more difficult to leave previous characters behind?

SP: This definitely aided with my performance and I hope everyone else too. It was a pleasure even at the writing stage to be honest, as we knew early on a lot of the people we wanted to cast, even if myself or Paul hadn’t worked with them directly we’d perhaps met them on another shoot or seen their previous work, so it enabled us to picture their performances very clearly and write with their voices in mind.

Certainly for myself as an actor it made me feel very comfortable to know the people I was working with so well. I was anxious about doing it, because I was perhaps one of the least experienced but we very quickly fell into a rhythm and I really enjoyed it – particularly my interactions with Paul Tonkin’s character Steven, who plays my older brother, as I had directed him a number of times before.

I have to say though that even the actors who didn’t know each other prior to this were very quick to develop a rapport with one another, which is testament to their abilities, especially as we had to move so fast. We were often shooting an episode a day, so 5 or 6 pages, which is quite a lot to get through – so there was next to no time for warm-ups or rehearsals, we just had to trust that people had done their homework and would deliver on the day, which they all did.

I wouldn’t say there were any conflicts in terms of leaving old characters behind, but obviously past performances were in our minds when we wrote the scripts and I would say a lot of the characters were tailored toward specific actor’s strengths, hopefully enabling the cast to show off what they can do!

MM: Paul, is there any significance in the use of Bristol as a location?

PD: We all live here and we love this city.  Not only is it very picturesque for filming but also it made sense to set the show around our hometown for logistical reasons. It’s not just the setting though, as we decided to make Bristol a feature by stating the alien ship has only come to Bristol and nowhere else in the world, so it is significant for story purposes too.

MM: The episodes are all near 6 minutes in length, what was behind the decision to make the episodes so short?

PD: Two reasons really. One was that we wanted the show to be bite-sized episodes that you could watch daily without having to commit a lot of time.  With the YouTube culture and people’s attention spans as well as the normal time pressures in the day all having an effect, we thought having smaller episodes meant people could fit it in wherever they might be, be it on the bus, or in a coffee shop! The other reason was purely financial.  We shot an episode a day and that involved shooting about 5-6 pages within that day.  To up that running time would have meant doubling our shooting schedule and therefore our budget.

MM: There are some strong visual effects in the series, was this an important aspect for you as a director?

PD: Well I have a little bit of experience of shooting with visual effects from past projects so knew roughly what we could and couldn’t do.  It was always going to be a challenge and I love that.  If it was easy, not only would everyone do it but also it wouldn’t be any fun. The effects had to be good or as good as we could make them, which is why they took so long to produce and made our post-production schedule 18 months long! What I do like about working with visual effects is that there are some that are in your face like the ship or fighter jets, but then there are some that are really subtle that get past the audience.  We changed the skies in shots to make them more interesting, we put images on mobile phones and just had some shots that physically don’t exist as a location. So I’d shoot elements like a row of cars, a building and sky and our effects guys would composite them all together to make the location that we needed for the story to work, that in the real world you could never film. My hero for this type of work is Forrest Gump and Back to the Future director Robert Zemeckis. There are so many effects in his movies that you don’t realise are effects and he is the master of sneaking that past you.

Horizon certainly does offer a strong quality in the CGI that is used. Although the narrative is one that has been used a myriad of times, being used in this context is something that has not been explored in any great detail. Horizon provides short bite-size programmes that anyone can fit into their day which, despite the length, manage to convey the story and feel like an entire episode. They don’t feel rushed or unfinished, despite the limited length and the first episode leaves the group of individuals on a cliff-hanger, leaving the audience wanting more. See what all the hype is about by viewing the series on YouTube. You won’t regret it.