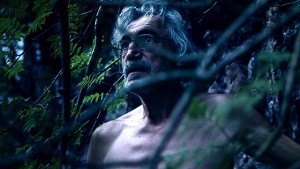 “I slid, stumbled and rolled all the way down the edge of the loch. And that was it; I was trapped. I couldn’t go left, I couldn’t go right. I couldn’t go back up. I remained there for about five hours and toyed with the idea of making a fire. But all of a sudden a sense of latitude came over me. I had pretty much ran out of all my food and i knew my options were extremely limited. I thought, “This is it. Whatever is going to happen, is going to happen””.

20 years ago, Garnet Frost suffered a near-fatal accident that left him stranded in the most remote area in Europe with no hope of escape. By some miracle, a pair of fishermen eventually came to his rescue. But before he left, Frost noticed something. Just a few metres away, buried deep within a boulder, stood an ancient staff. Intrigued, he grabbed the object and began his research as soon as he returned to London. After reading everything he could find on the subject, Frost concluded that the staff was a marker for the site of Bonnie Prince Charlie’s lost gold; a treasure trove now believed to be worth more than one billion pounds. 20 years later, armed with a map, the staff, and with British filmmaker Ed Perkins in tow, Frost returns to the Highlands in search of the true answer to the mystery in The Lost Gold of the Highlands, premiering Tuesday 17 March at 11 pm on BBC4.

The quixotic quest; 20 years in the making, took over four years to shoot and release. But as Frost and Perkins would both agree, the journey’s been more than worth it. “We first started filming in Garnet’s shed,” Perkins says. “And now we’ve ended up with a film on BBC Storyville. It premiered at the Tribeca Film Festival, it won best documentary at the Jozi Film Festival, it’s played in New York, Edinburgh and it’s showing at the Madeira Film Festival in April. Liza Minnelli sang an original song for the film; ‘Until the End’, and we got to work with Simon Chinn; a double Academy Award-winning producer. It’s been fantastic.”

As for Frost? “It’s been a great result. I absolutely love the film. All the people who have been following this story and my adventures, my friends, family and so on, are all really excited on my behalf, so it’s very good news. And now it’s on national television. It’s sort of like a dream. I already have people stopping me in the street. It bothers me slightly because I don’t want to be conspicuous. I don’t like people pointing me out. It’s exciting, but at the same time, it’s a little bit frightening too.”

The Lost Gold of the Highlands marks Brit filmmaker Ed Perkins’ first feature film, the director having previously shot behind-the-scenes docs for some of the most critically acclaimed documentaries in recent years, including Searching for Sugar Man, Project Nim and The Imposter. Simon Chinn, the aforementioned films’ producer, also joins the team for Perkins’ feature debut, while John Battsek (One Day in September), J. Ralph (Man on Wire) and Paul Carlin (Baby it’s You) take on the roles of executive producer, composer and editor respectively. For Perkins, working with such a talented team has been an immense privilege. “It’s been an amazing collaboration. For many young filmmakers trying to make their first film, the first big step is trying to find the story. But I think it’s crucial to try and surround yourself with filmmakers who are much more talented and much more experienced than you are. I was very lucky to be able to do that and I owe the team a huge debt of gratitude because they rescued me from a million mistakes I was making along the way. I owe them everything really.”

The film has received a deluge of rave reviews and best doc nominations, but it’s also attracted controversy for “heavy-handed directing”. Objectivity has always been a hot topic in the documentary genre, especially when docs such as Bart Layton’s The Imposter tend to blur the lines between fiction and reality. But with many documentaries, subjectivity is inevitable. “With Cinéma Vérité, you have a fly on the wall approach. You make sure that you don’t have any impact on what you’re recording,” Perkins says. “This story was different — for better or worse. If I put a camera two inches in front of Garnet’s face, I would be lying if I told you that I wasn’t having an impact on him and the way he was feeling and talking. I thought it would be interesting to embrace that and to accept that I did have an impact on the story.”

But what about Frost side of the story? “It’s a portrait of me; a very good and a very fair portrait. Nevertheless, it’s stylised, like all portraits are. It’s painted in a particular light. One side of the camera is reality, yet the other is semi-fictionalised, it’s kind of unavoidable, really.”

“Werner Herzog has an idea called ‘the ecstatic truth,’” Perkins says. “It states that truth in cinema “can be reached only through fabrication, imagination and stylisation.” I like films that embrace ambiguity and give the audience the freedom to make up their own minds about what’s going on. So I thought it would be an interesting challenge to tell this story as much through music and allegorical imagery as through vérité sequences and dialogue.”

But while the ‘ecstatic truth’ may have split opinion, most, if not all, agree on the strength of the film’s visuals. And rightly so. The Highlands’ mountains, valleys and rivulets are all bathed in natural light and awash with colour. Loch Arkaig, the site of Frost’s accident, is a stage lifted straight from Greek mythology; with burning twilight, floods of onyx and myriad secrets buried within. It serves as a fitting end to an epic quest, and it’s every bit as mysterious as we’ve been led to believe.

Elsewhere, Perkins exhibits a keen eye for composition. London’s small flats and bustling streets are shot with a cramped, almost claustrophobic intimacy. Later, when Frost heads to the Highlands, the camera withdraws, framing the landscape like a canvas and inviting the viewer to gaze in wonder at its majesty. In the past, Perkins directed a series of TV documentaries for National Geographic, and the technical skills he learned during that time are self-evident.

Astonishingly, the entire film was shot on a single camera — and by the director himself. “I shot the whole film on a Canon 5D II, which is a little DSLR camera,” Perkins says. “It’s an amazing camera. In the last decade there’s been an amazing movement in filmmaking because young filmmakers now have access to really cheap cameras. As a result, I think there’s been a democratization of the whole filmmaking process because you no longer need a huge budget and a crew to make a film.”

The production might have been small in scale, but the film is large in scope, tackling themes like mortality, isolation and existentialism with ease. Perkins also doesn’t shy away from grand symbolism. In one stand-out sequence, we’re treated to a succession of biblical imagery, including ascension, judgement, baptism and resurrection. This is a film that clearly has a lot to say, but it does so succinctly.

As for what Frost finds at the end of his journey? We’ll leave that for you to discover. But rest assured, the trip’s worth taking.

The Lost Gold of the Highlands premieres Tuesday 17 March at 11 pm on BBC4, and will be available on BBC Iplayer for a month thereafter.

Related Topics:Alex SmithFeature
Up Next

An Interview With… Michael Malarkey