“A gritty story that offers insight into the otherwise hidden world of drug dealing and its consequences*”, Suburban Cowboy follows a drug dealer on Long Island who finds himself over his head when one of his soldiers robs a connection to ruthless Serbian gangsters. When the debt falls on his shoulders he is forced to take drastic measures.

How’s it going, Ryan? You must be on cloud nine after getting such an overtly positive response to the film earlier in the year!?

It’s been overwhelming and I’m beyond grateful, but I’m more excited that it is finally out for everyone to see. It’s my first as a director and it is a bit surreal. 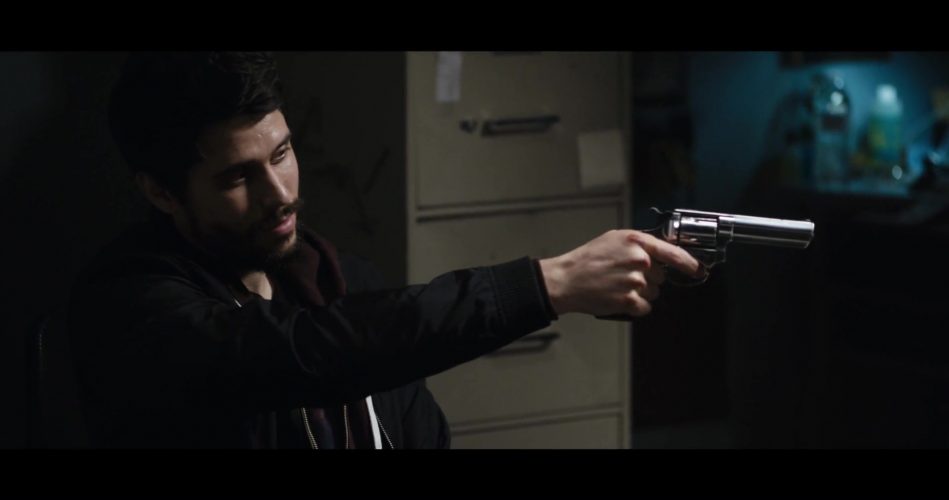 One thing I’ve noticed is that people seem to assume it a straight-up action movie, but it’s actually more or a character piece isn’t it?

From the outline stage I knew that I would be working with a limited budget, so it was always conceived as more of a character piece. Something that builds tension through character and dialogue – because of the financial realities of making the movie. We were forced to think of creative ways to show things, or not show things for that matter. We took more risks creatively and the film is not just another crime thriller of a guy walking around with a gun.

If it were a more traditional action movie it would feel a bit crazy or trite for the lights to go out and have a dance sequence or for a shadow to come to life as a werewolf… and maybe it still does, but thankfully so far people think it works.

Was it important to you that the story, and your character, be well fleshed-out and somewhat complex?

Yes, but I think that would be true of any project. It’s not something I actively think about because it is ideally always heading in that direction. What was more pressing on my mind was how authentic the character was (and all the characters). It was extremely important to me that this felt real.

The themes within the movie is actually quite reminiscent of some of the greats – but tell me, what movies influenced the script, tone of the movie, and your lead character?

There are two specific films, which happen to be by the same filmmaker, Pusher and Drive by Nicholas Wending Refn that definitely influenced Suburban Cowboy. Pusher was so raw, almost like a documentary. The characters felt real. Even though they were awful people, you felt something for them. In terms of the final look, we wanted something more along the lines of Drive – which sounds great, but we were on a micro-budget. Our DP, Jakob Lofberg, did an amazing job with what we were asking… and with what we had to work with. One of the other films we also looked at as an influence visually was The Drop, which was also set in New York. It was slick while still looking raw. We sat down with our colorist, J. Cody Baker, and were flipping through references and he stopped us… ‘Guys, I get it. I colored The Drop.’ So that always helps. I’m still not sure why he signed on for our tiny little film (while he was coloring Star Wars: A Force Awakens and had zero free time), but I’m extremely grateful he did.

As for the lead, I was hoping for something along the lines of Tahar Rahim’s Malik from Un Prophet. He was a hustler who worked his way up, while taking chances. He had a backbone and wasn’t afraid to get his hands dirty, while still having a conscience. He wasn’t physically imposing, but also wasn’t a pushover. He was stoic when he needed to be, but able to talk his way out of situations.

Would you compare it to any other movies?

Crime stories by themselves are nothing new. What separates them and makes them unique are the world they exist in. Are they something we have yet to see? Are the details dialed in and authentic?

I already mentioned Pusher (the original, not the weak English remake), which is the best comparison, but any crime story set in a very specific world – Gomorrah, Un Prophet, The Departed, No Country For Old Men, Lock Stock and Two Smoking Barrels… I’m not saying it is on par with those – not even close – but the authenticity in the world they are set is something we strived for. Even a crime show like Justified is a good comparison.

Were you involved in the film from the get-go – conceptualization stage and all?

Yes, I wrote the script so I was there from the first key stroke. Suburban Cowboy is inspired by true events. Someone I know pretty well was involved in the weed trade and when he got out of prison the first time he passed me a notebook that he called an autobiography. It was very episodic and didn’t really add up to much… but the world was exciting to me. The idea that the really normal looking guy who lives next to you is a criminal is interesting. When people conjure up drug dealers and crime lords, they are these stocks characters in genre films. So I wanted to make something that was more realistic, especially for where I grew up on Long Island. I cherry picked some of the best stories he had and crafted something that actually had a plot, and I leaned on him and a few other friends in terms of making the smallest details as realistic as possible. As I was finishing the script he actually got arrested again, but for trying to expand his business outside of weed. It was a wild time because I am someone who doesn’t even get speeding tickets and I am essentially in the middle of this. So, I went back to the script and rewrote the ending to reflect what was really happening. That was three years ago and he just got out of lock-up.

How did you go about getting US distribution?

We were working with Paradigm on domestic sales. Our first targets were the distributors every knows – Lionsgate, etc.. and the response was actually really good. Something they all came back with, which is like an underhanded compliment, was how impressed they were with the acting even though there were no ‘names’ in the film. But that led to the same reason for a pass, and understandably so – without any names we don’t know how we can position/sell it, especially theatrically. So it was about finding someone that believed in the film, was willing to roll up their sleeves and also someone we believed could get us placement over and above what we could do through self-distribution. Our foreign sales agent, Galen Christy at High Octane Pictures, was actually instrumental in the process. He was the first one to mention Uncork’d. I passed that onto Paradigm, specifically Derek Kikongo, and they ran with it from there. It was a nerve-wracking, but fairly painless experience because of the people we surrounded ourselves with.

Has the film been modified or changed at all from the first cut? Anything the distributor asked you to cut?

From the first cut to the final cut… it went from 115 minutes to 92. A lot of needless nonsense was cut – we had a lot of great, truly honest feedback from some close friends/professionals like Dikran Ornekian, Rylend Grant and Dane Allan Smith. I’m lucky to have these people in my life, or I would have made a two hour disaster.

Since we locked our final cut nothing has changed. I believe the distributor can alter things for certain platforms (airlines, etc), but I would expect that. I’m all for freedom of speech and creative expression, but you probably don’t want a meth addict raping a guy in a back room on the airline screen next to you. No matter how tastefully it is done.

What are your hopes for the film?

I’d love for people to watch the film and be unnerved by it, just knowing that this world exists right under your nose… but also enjoy the ride you go on.

For that to happen people need to actually watch the film. So my hope, more than anything, is that as many eyeballs as possible see it.  It’s really hard, especially when you make a small movie, and marketing is that one side of the film business I am truly deficient in… but I’m working my butt off and hopefully we can crack through even a tiny bit.

Behind Closed Doors with Lakshmi Devy

Up Close with Ashlee Macropoulos