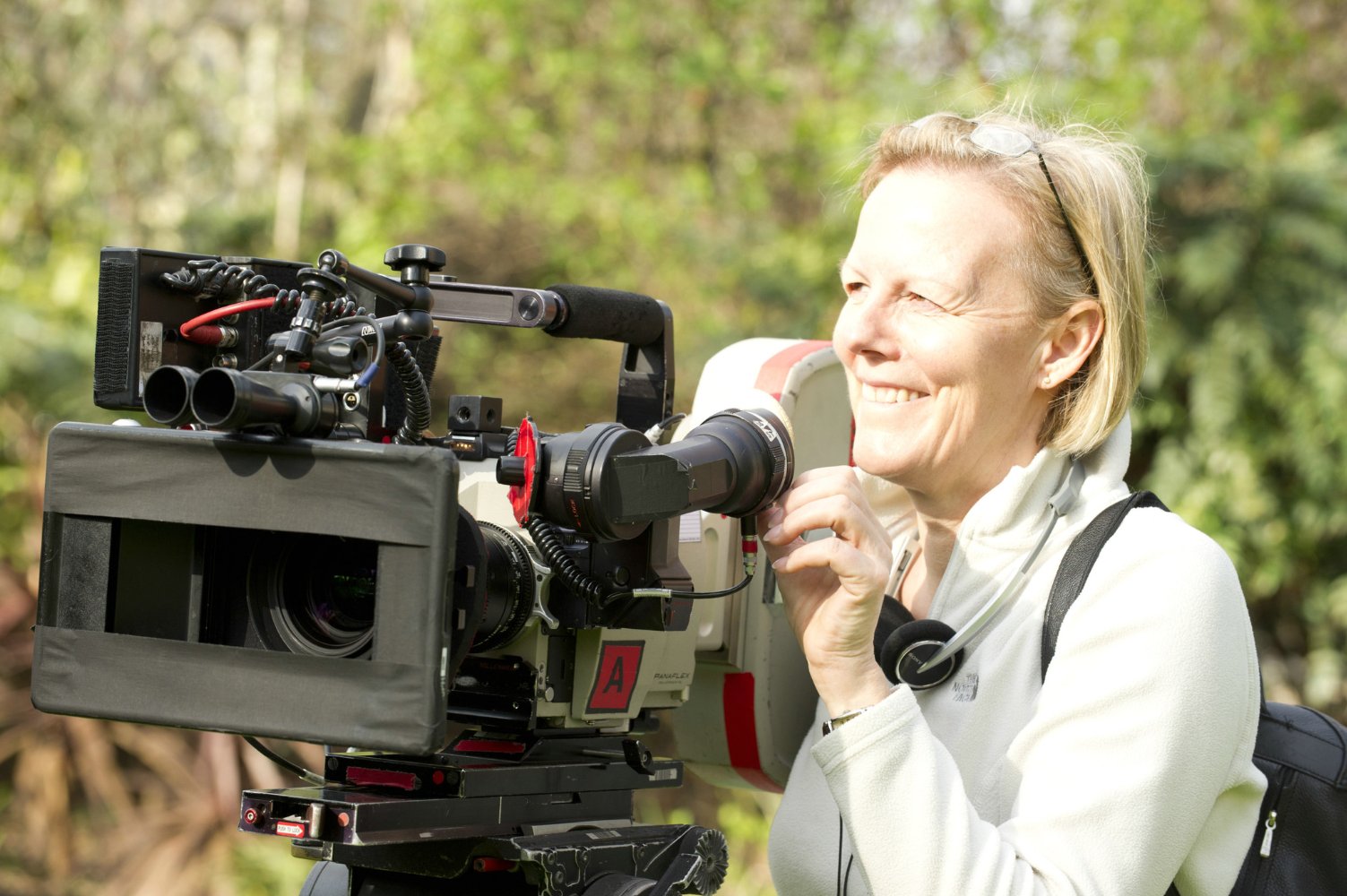 Movie Marker’s Kat Kourbeti caught up with acclaimed director Phyllida Lloyd at this year’s Edinburgh International Film Festival, just as her production of JULIUS CAESAR at the Donmar Theatre with an all-female cast hits screens on Wednesday July 12th.

KK: I wanted to start off with a question about filming the production and presenting it as a film, as opposed to the done thing nowadays which is live broadcasting theatre.

PL: I feel very ambivalent about plays on screen. I think that it’s very hard for actors to be playing to two different audiences. They often are very short-changed on maybe playing in a gigantic space, and then the camera’s going right in on a performance which the actor isn’t given a chance to modulate for the camera. I think the art form, if you can call it that, is in its infancy. I applaud giving access to more people – particularly getting stuff out of the metropolis, with NT Live giving audiences all over the country and all over the world the chance to see things they wouldn’t be able to see otherwise.

However I’m anxious about the fact that no young people are going to see these performances, particularly because the tickets are very expensive, but also because the coverage is very rudimentary and dull. I think that’s mainly because the camera is in the wrong place, because it’s not where you’d put it if you were in a studio. I’m not saying we’ve done this perfectly at all, but one of the advantages of (a) it not being live and (b) it not being in a proscenium arch theatre, is that I’ve been able to put the cameras more close to where I would have put them had I been at the studio, and get on the actors’ eyelines and shoot it like a movie, and cut reverses together. I wanted to give the screen audience an experience they could not have had in the theatre. That means a really intimate experience, where the camera is somewhere they could never have gone.

I also wanted to put Harriet Walter and Martina Laird’s performances on camera in particular, because I think that when you watch them you’re getting both Shakespearean acting of amazingly high quality, but also screen performances that are quite mesmerising. It’s an amazing feat to have both that epic power with the language, but also feel this rich inner life when you take the camera close – you think “oh God, tell me more!”

I’m on a mission: I would love more young people to want to see this stuff more, but it all starts with good coverage.

KK: What do you say to people when they say Shakespeare is hard to understand? Where would you suggest they start?

PL: You have to heat-seek productions in which the gap has been closed between the actor and the language, and also where you see yourself represented on stage and on screen. There’s no doubt that Shakespeare has largely been the playground of white, well-educated men, with some women allowed into a couple of token roles, and what we’re trying to do [with Julius Caesar] is say: the world has changed, but this material remains so universal and relevant.

So far we’ve seen a barrier between the public and Shakespeare, the insistence that it has to be performed in BBC English – you don’t have to do that! Take a group of very diverse people – in our group, seven of the twelve cast members had never done Shakespeare before professionally – and ask them not to change their accents, but to literally make the language their own. We’ve had children come to see this that seemed to be gripped by what was happening; took it to the States and performed it in Brooklyn for public schoolkids who had never seen a play before, let alone Shakespeare, and they were like, “how do you do this? We want to know how to do this stuff!”

And what I said was, “tear it up, cut it, paste it, take it and make it your own, which is what we’ve done.” I think it does come down to not putting cultural barriers between us and it, not trying to smooth it out by saying we’ve all got to look the same, or sound the same. It’s something we do in England because of our dreadful class system, we’ve got very hung up on it.

If we were all women in a prison, then the whole world would be in here. It would be all different sorts of voices, and some people wouldn’t have English as their first language, and if we need to suddenly go into Spanish in the middle of the play, we’ll do that, and you’ll get it.

KK: What prompted the decision to transport the action into a women’s prison?

PL: Originally, I thought it would help both the actors and the audience believe in the action of the play, were I to locate it somewhere where the actors – or the characters performing it – were obsessed with freedom and justice, to the point where they were prepared to kill for it.

Then I thought that by putting them in prison uniform, they would immediately be rendered androgynous, and it would give me permission to bring together this diverse group in a believable way. We then took the play into Holloway Prison, and workshopped it with prisoners, and they said that they found the play – with its focus on freedom from tyranny, on justice, and with the superstitions in it, and the violence and danger – they described it as “highly suitable” to them.

So it started as a pragmatic thing to help everybody do this with conviction, to believe it. But then, as we began to learn about women’s prisons and understand about the criminal justice system, as we had access to these women and bore witness to their situation, it started to become a mission for us. We got interested in prison reform, in rehabilitation, in how hard it is to take art and culture into prison, and we started to become advocates. It was no longer an aesthetic thing; what we thought about the world and what we did on stage became one thing, and the films – which we want to take into prisons and schools – are the next stage of that.

KK: Could I ask what your thoughts are on the Shakespeare In The Park‘s Julius Caesar situation? I feel like there was a misunderstanding of what the play is about.

PL: Unquestionably. The idea that Oskar [Eustis, director] would put this play on to advocate the assassination of Donald Trump is laughable. The play is so obviously saying that the effects of a revolution, of a violent regime change like this, are catastrophic. It’s why it’s still so resonant.

When we were rehearsing Gaddafi had just fallen, and we watched as the events unfolded – the Arab spring, the aftermath in Iraq… All of these countries that have had revolutions and regime changes where leaders were deposed violently, the next generation’s just been unable to govern, in the same way that in the play you see Marc Anthony’s reign descend into factions almost immediately after he gets into power.

I do feel that they got the complete wrong end of the stick in New York, which is really unfortunate… and what’s nerve-wracking is whether it’ll make artists’ organisations self-censor, out of fear of losing the corporate sponsorships they so desperately need.

KK: Do you have any advice for directors who are thinking about filming theatre?

PL: It’s ultimately about whether you can make this into more of an experience than it was seeing it in the theatre. If you can’t, then don’t do it.

KK: How does it feel to bring a play to a film festival?

PL: It feels strange [laughs]. Somebody said to me, who hadn’t seen it, “don’t you think people will be disappointed? They’re going to the Edinburgh Film Festival, and they’re going to see that it’s just a play!” For my part, I had already stressed to never include the term “feature film” in the literature, so people would have some idea.

Ultimately I’m thrilled that the festival accepted it and wanted to show it, and put it into competition as well. We just went with the flow on that. I hope that young people will hear about it and be inclined to give it a chance. It’s them we made it for, really.

Julius Caesar is in cinemas on July 12th. Check out the £5 tickets for Under 25s at selected venues!

Up Close with Ashlee Macropoulos

Interview with ‘After The Storm’ director Hirokazu Koreeda