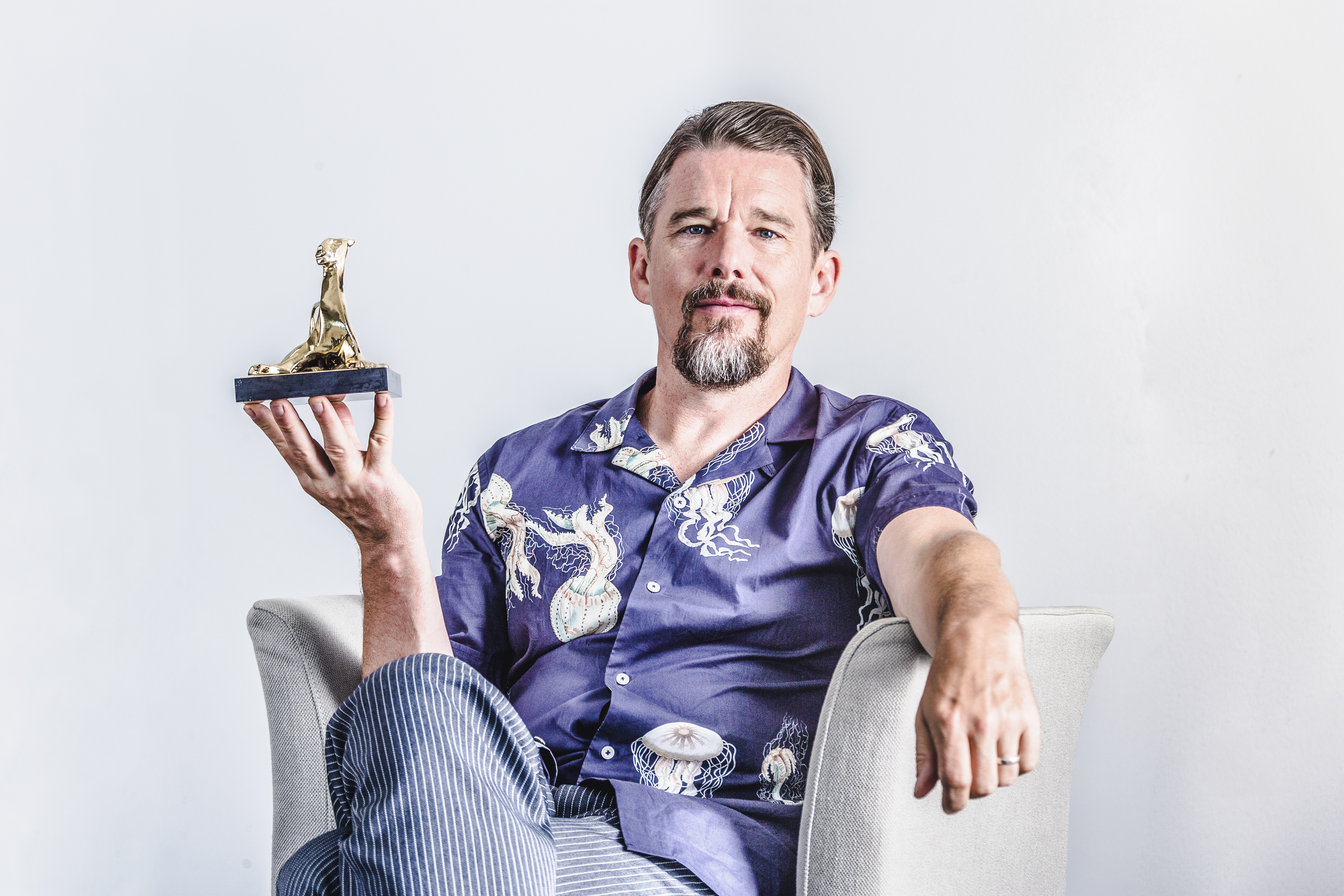 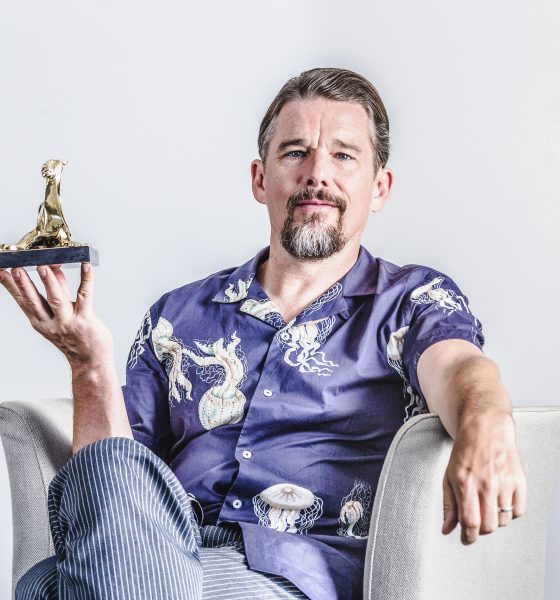 An Interview With… Ethan Hawke #Locarno71

Ethan Hawke, despite being only 47, has been acting for well over 30 years. After his breakout role in 1989’s Dead Poet’s Society he has had iconic roles in Reality Bites,  Gattaca, Training Day and Boyhood.

His work with Director Richard Linklater has resulted in one of the most beloved film series of recent times in the ‘Before’ trilogy and this year looks set to be one of his best yet.

With a standout performance in Paul Schrader’s First Reformed and his feature film Blaze, which he wrote and directed set for wide release soon, Ethan Hawke isn’t going anywhere soon.

We spoke him at the 2018 Locarno Film Festival  where he is receiving this years Excellence Award, given to those who through their work and talent, have enriched the cinema with their unique contribution. It’s past winners include Isabella Huppert, Christopher Lee and Susan Sarandon.

How does it feel at this stage of your career to be given a lifetime achievement award?

On one level, I feel completely undeserving but on another level I feel well… Richard Linklater told me ‘don’t get too high on yourself, these are what you call “mid-career check ins” and it means you’ve made it to this one stage and in the next round everybody will hate you again and then you have to survive long enough to get to the next round and then you can be the head of the Jury’- so I’m in the front tier of the second row.

At the beginning of ‘Seymour’ (showing at Locarno), you said you were struggling for a long time with why you do what you do, has that changed since you made the documentary and since you had the encounter with Seymour Bernstein?

I think so. Part of why I think I made that movie was to spend more time with him. Some people have a mid-life crisis and buy a Porsche – I had a mid-life crisis and made a documentary about an Oxygenarian piano player. One of the messages he has to offer people is ‘you are enough’. I think my take-away from this was just to accept myself, and it’s not something that’s just done. It’s something you have to keep doing.

You were saying about “mid-career check-ins”, but looking back on your career, you seem to have had a charmed career and you’ve never really had the troubles everyone else has had. You’re always visible, people always know what you are doing – and it’s always something only you would be doing and nobody else.

Well thank you for saying that! I hope that that’s true. There was a magazine article back home that was talking about the success of ‘First Reformed’ and the reception of ‘Blaze’ that I was poised to have the best year of my life and I may be having my “Matthew McConaughey Moment”. My friend Richard Linklater phoned me up and said – ‘for you to have a “Matthew McConaughey Moment” you would have had to of been washed up! What they can’t write is you’ve done the same thing consistently through your entire life’- and I’ve been lucky that way and the reasons why luck has given me that charm is because really early on, I’ve tried to solve all of my problems with working and that’s when my first marriage fell apart but I just worked harder than ever, and that’s why I went back to the theatre-which is a great healer for actors because it’s incredibly hard and I think that when you really apply yourself, humility naturally rises, you meet your own walls. It’s also strange to be 47 and have been making movies for almost 30 years; it’s a little rare actually.

You recently published a wonderful little book called ‘Rules for a Knight’, which is all about decency. What is the biggest misconception of you, now you have the chance to correct it?

Being proud of being good, doesn’t really make any sense, because if you’re good, pride would be an obstacle. There’s so many ways I’m not good and the truth is, you don’t want to be perceived as good because you feel that you won’t have an edge or be cool, the way young actors want to be. I was very lucky as a young person to have parents with very strong spiritual beliefs and the only thing that was really important to them was their spiritual life. As soon as you depart from spiritual success, that determines your worth- they really wouldn’t love me any better or less if I won Best Actor at Venice or didn’t. That’s not how they grade. They love me for how I’m doing in my own inner-journey- and as a young person you think that’s corny, but as you get older you think that’s actually not corny at all, that’s actually reality. As you start to live long enough to see people’s ego’s really hurt themselves, we end up hurting ourselves with our own self-importance. Finding a balance between believing in yourself and trying to have an inner life that matches something you can be proud of, or that you would want the people that love you to be proud of. I’m aware of what a wonderful seat this is to be in, and an instant gratitude takes place. It’s your work inside that makes you prepared to handle all the different vicissitudes that are going to come.

You were saying before about the spiritual background that you have and that sense of what it means to be good, how much did those thoughts feed into ‘First Reformed’?

When I started the script for First Reformed, on one of the first pages, it talks about all of the books that are on Reverend Toller’s desk and they were almost all books my mother had given me. There was a list of them, Thomas Merton being one of them. I felt like at been prepared for this role. One of the things Merton himself writes about, he was already starting to see an obsession with “celebrity” happen and having a “public self”.  I think it helped me deal with celebrities- what I mean is, one of the last times I spoke to River Phoenix, he was talking a lot about how people perceived him and how hard it was to constantly trying to figure out who you are and tell people what you’re not, like when people label you. I wasn’t having that problem because I knew that all of that was fake. And River had just been to the Oscars and he couldn’t believe how fake the Oscar’s were. He said ‘ the statues aren’t gold, they’re like paper! It’s so fake you wouldn’t believe it!’ and I remember thinking, ‘if you’re trying to make me feel bad for you going to the Oscar’s then fuck you!’. I realise now, understanding and accepting the phoniness of the world, you’ve just got to take it as a truth and not be hurt by it every time, it happens.

Were you disappointed when Boyhood didn’t win anything?

That’s my point- not at all, because I never saw that as -you want the work to be worthy, but if you get caught up in seeing other people’s definitions of what is the authentic way for you to live your life- it wouldn’t make the movie better or worse and it wouldn’t affect the final cut of that film one bit. I always tell people it’s a little better if you don’t. I hate it when life always moves the goal line, we made a movie with our closest friends for nothing, over 12 years- about the subtle movements of growing up- and it found it’s way in the commercial markets. That’s a miracle. You don’t give up with your heart so easily. I wasn’t disappointed, I was so proud. I’ve spent my life making little indie movies that no-one even hears of and so to turn that victory into a defeat, would be a waste of time.

What’s the challenge in doing movies like ‘The Purge’ and ‘Predestination’?

Well, by the time I was 20 years old, I’d had two great mentors – Joe Dante and Peter Weir.  Dante and I sat down and watched ‘The Howling’ and he said – drive-in movies, if done with art and love can be amazing. It’s like the Trojan horse of Troy- if I said let’s watch werewolf movie and instead secretly, it’s a PTSD movie about the Vietnam War. Get Out is a great example. Another example of these “Trojan horse” movies. If I told you I was making an important film about race relations in America, you wouldn’t want to come, you’d feel like you’re being preached to. If I tell you it’s a scary movie, he comes into the house…. etc… and ‘The Purge’ is the same way- set in ‘the future’ when rich people don’t care about poor people- and I love that because there’s something punk rock about it, it’s not what it seems. Movies are different ways of people trying to express themselves.

Austin, Texas is a huge part of your career, ‘Blaze’ is also a tale about Austin, do you think that there are other stories to tell about Austin- a town that is probably so unique- that the world should know more about it?

The short answer is yes, but the long answer is- the whole world is like that and all these stories need to be told and one of the great things is that we are at this weird in-between place in time right now where it’s very possible for anybody in the world to make a good movie, you can shoot it on your phone and edit it. If you have something to say, it’s like a novel. If you’ve been taught to read and write and you have some paper and a pen, you can write a great novel. You can do it from jail, you can do it on a boat, and now the same is true with a movie. And it’s changed the game. That’s why film-festivals have become so important because you guys are curators. You address what the world should be paying attention to, what should be seen and if we didn’t have these festivals, big business would crush all of the smaller ones.

You’ve just made two movies about obscure musicians, how does that all tie in with those themes and what drew you to those characters?

I think just a natural love of music. A celebration of the people I’ve spent my life with. You’re teachers will all tell you, write what you know and I know people like Blaze- I didn’t know him, but I knew people like him and I felt qualified to write that story, because I’ve had to swim in that water.  I’m just trying to follow my gut and I feel that you need to find what you enjoy, and let the love grow.

An Interview With… Kyle Cooper #Locarno71

Sam Claflin and Baltasar Kormákur on the challenges of making ‘Adrift’