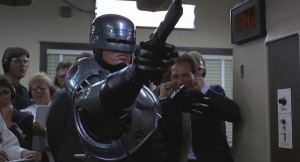 The original Robocop may not be the best action film of all time, but it is a much revered cult classic, beloved by both critic and fan alike. It’s certainly bizarre growing up in a world ‘post-Robocop’, when everything it predicted and satirized about the American Dream and the pervasiveness of Corporations has come true. Not that it was exactly fresh territory Paul Verhoeven was exploring as a director – for everything in the 80’s fondly looked back upon, there was someone holding up a funhouse mirror.

Robocop’s success and its enduring status as a cult classic and a near perfect film must owe to something else then. Like most of Verhoeven’s other work, it works well as a bombastic, all American 80’s action film, which is only enhanced by the subtext it weaves. Unlike many films of its type (and arguably the 2014 remake) you could argue that a lot of the film is composed of hidden meanings, with only the finale being open about what the film’s themes are. Even then it’s left out that the ‘bad guys’ of the film actually win, OCP Corp. being allowed to carry on remoulding a run down Detroit to its whims.

It’s that packaging of gung-ho machoism with a more cerebral underlying film that ultimately works, as well as an awareness of just how goofy the premise is that endears it to many I think. Make no mistake, it’s not a perfect film by any stretch of the imagination, but it is a film that makes the most of its goofy premise. By stretching things just enough so there is a sense of heightened reality (with its cutaway news segments and TV shows and blood splatter that is so excessive as to be entertaining) the audience are kept aware that there more be going on under the surface than meets the eye. Whilst this approach was initially met with confusion in Verhoeven’s later work  Starship Troopers, here it seems to have been embraced fully by the audience.

Perhaps because it was a smaller film that initially only found praise with a niche audience, or that Starship Troopers confused fans who expected a didactic interpretation of the source novel instead of a condemnation.

Regardless, the film never forgets to retain a sliver of humanity in the central leads or Murphy and Officer Lewis. Whilst the rest of the world seems to be going to hell and is completely unlikable, the film has us empathise with Murphy as a man who is trying to remember who he is, the solving of his own murder linking in with his return to humanity.

Overall, it’s the best kind of action film – schlocky but self aware. It lets it deliver the violence an audience expects from that sort of film, but also nourishes the brain. Quite why we’ve not seen a generation influenced by Verhoeven I don’t know. But it would be a far richer cinematic landscape for it, with Robocop standing as a goalpost, taunting film makers to try and better it.

Facing Fear Itself – The Terminator

‘Yours Sincerely’ – The Breakfast Club At 30