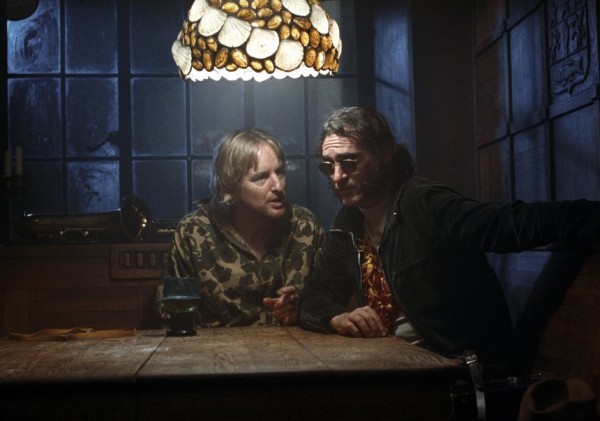 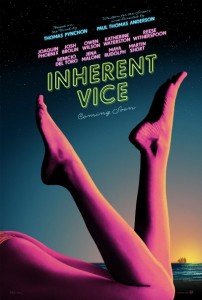 They say the whole is greater than the sum of its parts. If you agree with that line of thinking than you will likely be disappointed in the latest from director Paul Thomas Anderson. At nearly two and a half hours, it is a mess of a masterpiece that begs for you to dissect every scene and every line of dialogue as well as how the actor speaking a said line conveys the meaning of their dialogue. Do we place this kind of importance on the film because it does indeed come from a filmmaker with the unique status of Anderson? If it came from a lesser known director would the awaiting audience be as accepting? It’s hard to say and it hardly matters because no one else would ever make films like the ones Anderson crafts. Like his other six features,Inherent Vice is wholly a concoction of the directors singular voice and style. From Boogie Nights to There Will Be Blood and Magnoliato The Master Anderson has demonstrated an eclectic range that gives each new film a dynamic all its own. It has always been clear his sentiment is slightly off-kilter, but he has never made anything as loopy or goofy as what we have here and somehow it seems as if this is the truest representation of the person Anderson actually is. As much as Inherent Vice fits perfectly into Anderson’s diverse filmography it is the way he has approached the project that stands out more than anything, maybe even more than the finished product itself. Set in Gordita Beach, California in the summer of 1970 as Vietnam rages on and the sixties come to a screeching halt the director infuses his film with this aesthetic by consistently relying on the style of limited camera movement and the framing of shots to capture specific angles that immediately conjure up references to films of the time period in which his film is set. From the attention to detail to the technicolor texture of the images and more forward to the seemingly blind, but no doubt highly calculated preciseness of not seeming to give two shits Anderson delivers a film that, on the surface, seems to make little sense at all. And yet, as one begins to dig deeper and break down the whole of the film into single scenes, individual moments and certain pieces of dialogue it somehow makes more sense even if that bigger picture is all but lost. While Inherent Vice isn’t and won’t be hailed as Anderson’s greatest work, it is easy to see it becoming the one his loyal fans end up returning to most often.

Based on the 2009 novel by Thomas Pynchon Inherent Vice tells the story, mainly, of Doc Sportello (Joaquin Phoenix); a private investigator whose ex-girlfriend, Shasta Fay Hepworth (Katherine Waterston), comes to him in the beginning with the story of how major real-estate mogul and current beau Mickey Wolfmann (Eric Roberts) is the subject of a scam. Mickey’s wife Sloane (Serena Scott Thomas) and her own lover on the side want to have Mickey admitted to a mental health institution and Shasta is hoping Doc will help her spoil this plot. At around the same time Doc comes in contact with Tariq Khalil (Michael K. Williams) who asks him to find out the whereabouts of Glen Charlock, who also happens to be one of Mickey’s bodyguards. In his pursuit and after a series of unfortunate events Doc ends up being questioned by local LAPD hard ass and arch-nemesis Christian “Bigfoot” Bjornsen (Josh Brolin). Bigfoot informs Doc that Charlock has been shot and killed while both Wolfmann and Shasta have disappeared. From here on out we follow Doc on what becomes a series of disparate seeming events that are able to somehow still enhance the world in which this takes place while involving us in Doc’s thought process even if we don’t really understand much of what’s going on. Doc takes on another case involving Hope Harlingen (Jena Malone) as she hopes to find her believed to be dead husband, Coy (Owen Wilson), still alive. Doc has a few drinks with his lawyer Sauncho Smilax (Benicio Del Toro) in order to find out more about the “Golden Fang”, an old sailing ship suspected of bringing mysterious goods into port, and upon which Mickey and Shasta are rumored to have departed. He is reunited with Japonica Fenway (Sasha Pieterse), a runaway Doc returned to her parents on a previous occasion who is currently having an inappropriate relationship with her doctor (Martin Short). He stays informed on the city’s current status of his cases by sleeping with district attorney Penny (Reese Witherspoon) while all being sporadically narrated by Sortilège (Joanna Newsom) who I’m still not sure how she ties into everything else.

There is a small moment in Inherent Vice where one character looks up to another after they’ve been rambling on about who knows what and asks, “So, you’re here about?” which is only met with the response of, “good question.” It is a sentiment that is wondered again by the viewer countless times throughout as the the massive ensemble cast gives way to scene after scene where we have little idea as to how or if this certain event ties into the bigger picture. While I haven’t read the source material and am not familiar with the writing style of Pynchon, the fact he’s only given Anderson the rights to adapt what is considered the most commercial of his works tells me much of the structure and isolated tendencies of the plot. While Anderson has always had the need to pull his features slightly to the left in terms of inherent oddities he is only drowning in his own desires with Pynchon providing the template. Just as much, if not more than the immersive aesthetic and vibrant stylings of the director though are the performances of this large cast that compel us to stick with the infrequent narrative. As Doc, Phoenix turns a complete one-eighty from his previous lead in an Anderson film and gives us a dope smoking, sometimes inept investigator who is somehow able to still elicit a sense of empathy from the audience due in part to his consistent streak of bad luck. In essentially every frame of the film, Phoenix anchors the tone by being completely present in the moment. It would be easy to see Phoenix come at the character with little regard for who Doc is given he is on something of a high one hundred percent of the time, but it takes a fair amount of skill to give an impassioned performance that is meant to feel careless. Phoenix has always had this aura around him as if he disregards anyone and everything, unable to take a thought seriously unless he himself has it and while that makes seeing his more emotionally involving work all the more revealing this facade only builds with his portrayal of Doc that is amped to the max by the lunacy he exudes under many a circumstances. Other standouts include Brolin and Wilson as they are solid performers who add to the ongoing story while many of the others contribute little more than cameo appearances, with Short’s being especially entertaining.

I admire the hell out of anything Paul Thomas Anderson decides to put his mark on and here his boldness to not adhere to any given structure or formula, but rather to simply do as he sees fit making even a story as broad as this one all his own is instantly appealing. Inherent Vice is a movie I enjoy the more I think about it after the fact. I loved being a part of the world and interacting with the characters even if I still have no idea what I really thought about the film itself at the time I was experiencing those things. So, how does one even come to a final verdict? It is hard to say and ultimately so subjective in terms of this type of art that it truly doesn’t matter. The film is gorgeously realized and beautifully photographed in a sense that the hugely complimentary score feels more coherent than the story being told. My immediate reaction was one of wondering whether or not Anderson had tried too hard to put his own spin on a rather straightforward tale. With many of his other films, when I’ve finished watching them (especially for the first time) I’ve felt a moving, insightful experience come out of it and while I initially thought of Inherent Vice as an adventure I didn’t know if it felt as wholly engrossing in the way Anderson’s films typically leave me. Allowing a little bit of time to pass though, one can’t help but to continue thinking about the film and the choices made in creating it. One begins to realize the details of the plot are of little importance and that the real emphasis here is placed on the people and this semi-paradise where everyone is just trying to make it work yet nothing and no one seems able to work together. This is not strictly the story of a hippie P.I. at the dawn of the seventies, but more a portrait of a specific moment in certain peoples lives with nothing necessarily profound to say about the state of existence or what these characters are finding significance in. They are only looking for a path. It is difficult to pinpoint exactly how I feel about the film as it is certainly one I’d love to watch again and again; one where I may not ever know what exactly is going on, but where I will always be excited to see what comes next.