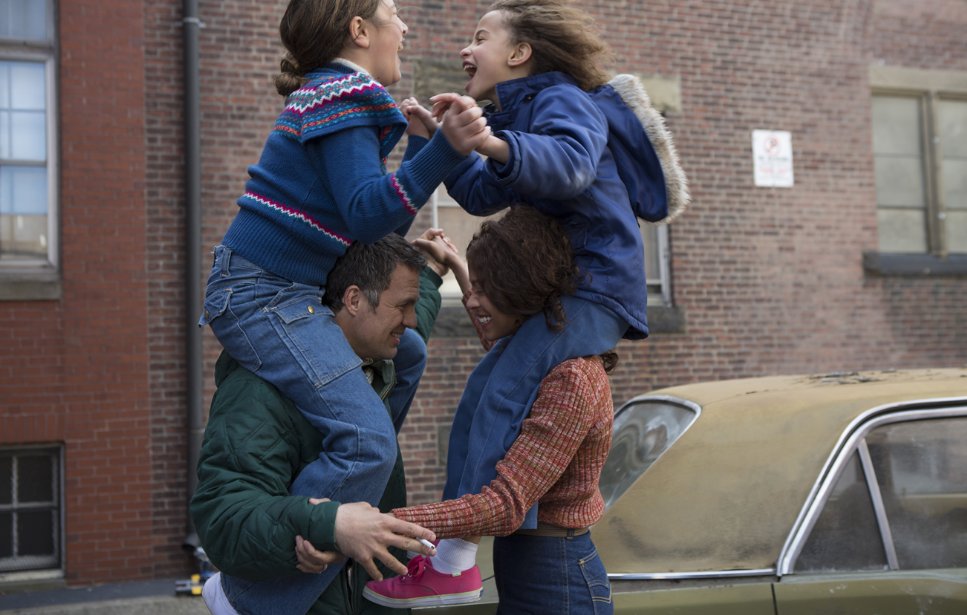 Fans of Mark Ruffalo, rejoice!  The week begins and ends with him.  Friday sees the the Oscar-nominated “Spotlight” opening in UK cinemas, but first comes Monday’s arrival of a film that more or less slipped under the radar, despite showings at both Sundance and Toronto in 2014.

“Infinitely Polar Bear” was eventually released in the States last summer, earning Ruffalo a nomination at this year’s Golden Globes.  But it never saw the light of day in this country, and its release on DVD this week runs the risk of the film being totally overlooked yet again.  Yet this is one instance where the phrase “straight to DVD” doesn’t mean a bad film.

First time director and writer Maya Forbes has based it on her own childhood experiences.  Set in 1978 – and, coincidentally, in Boston, as per “Spotlight” – the film follows the less-than-conventional family life of Cam (Ruffalo), Maggie (Zoe Saldana) and their two young daughters (Imogene Wolodarsky and Ashley Aufderheide).  Cam is recovering from his second manic breakdown, and the family are struggling to keep their heads above water on the little that Maggie earns at work.  When they can no longer pay for the girls’ private school and they’re moved to a vastly inferior one, Maggie makes a decision: to go to business school in New York for 18 months to study for an MBA, which will lead to a better, and better-paid, job.  That way the girls can go back to their old school.  But, in the meantime, Cam will look after them and, as he’s bipolar, he soon finds himself well out of his depth.

Essentially, this is a family drama, but its examination of Cam’s illness gives it extra edge, as well as the opportunity to look at the attitudes of the day.  He’s presented in a sympathetic light but not a rose-tinted one, yet Maggie firmly instructs the girls not to tell anybody about their father’s behaviour.  Mental illness is something to be kept inside the family.  And while that family is a loving one, his mood swings make life difficult for everybody, upsetting the girls and putting extra strain on Maggie as both carer and wife.  He’s a loving father, even when he lapses back into not taking his medication and drinking too much, but has to admit eventually that he’s a better father than husband.

The film is clearly aiming for more understanding and tolerance of mental health issues, far more than there would have been in ’78, when the term bipolar was only just starting to replace the term manic depressive. And that’s where the title comes from, with the younger daughter describing her dad as “totally polar bear.”

The home movie style that opens the film continues on and off throughout.  Cam is a keen photographer, taking shots of just about every moment of his family’s life, but as well as the ‘home movie’ footage, many of the interior scenes are filmed fly on the wall, as if there were cameras positioned around the apartment, filming everything 24/7.  It gives the film an immediacy and a personal feel that reflects the background to the story. Only in the latter stages does it take on a more conventional look and seem less rough around the edges.

As Cam, Ruffalo gets another opportunity to extend his range and gravitas as an actor.  Admittedly, there’s no escaping his superhero persona, Hulk: he and Cam have some behavioural traits in common and Cam does seem to wear green rather a lot!  The role came before his muscle bound wrestler in “Foxcatcher” (2014), as well as his restless investigative journalist in “Spotlight”, but the three performances together demonstrate breadth and subtlety.  Here, his charm and winning qualities are all but destroyed by his illness and, even when he’s on an even keel thanks to his meds, his behaviour is still slightly disconcerting.  He doesn’t understand the line between being friendly and invading other people’s space, so others find him intrusive and shy away.  It’s a challenging role, but one that he tackles with skill and humanity.

“Infinitely Polar Bear” is a warm, understanding portrait of family life.  Quirky and touching at the same time, it has plenty of gentle humour but always manages to avoid being smothered in cloying sentiment, thanks especially to the two girls who keep the film’s feet firmly on the ground.  It also promises much from newcomer Maya Forbes although, as yet, she hasn’t announced a follow-up project.  With any luck, that won’t be too long in coming.

Infinitely Polar Bear is released on DVD on Monday, 25 January.

13 Hours: The Secret Soldiers of Benghazi