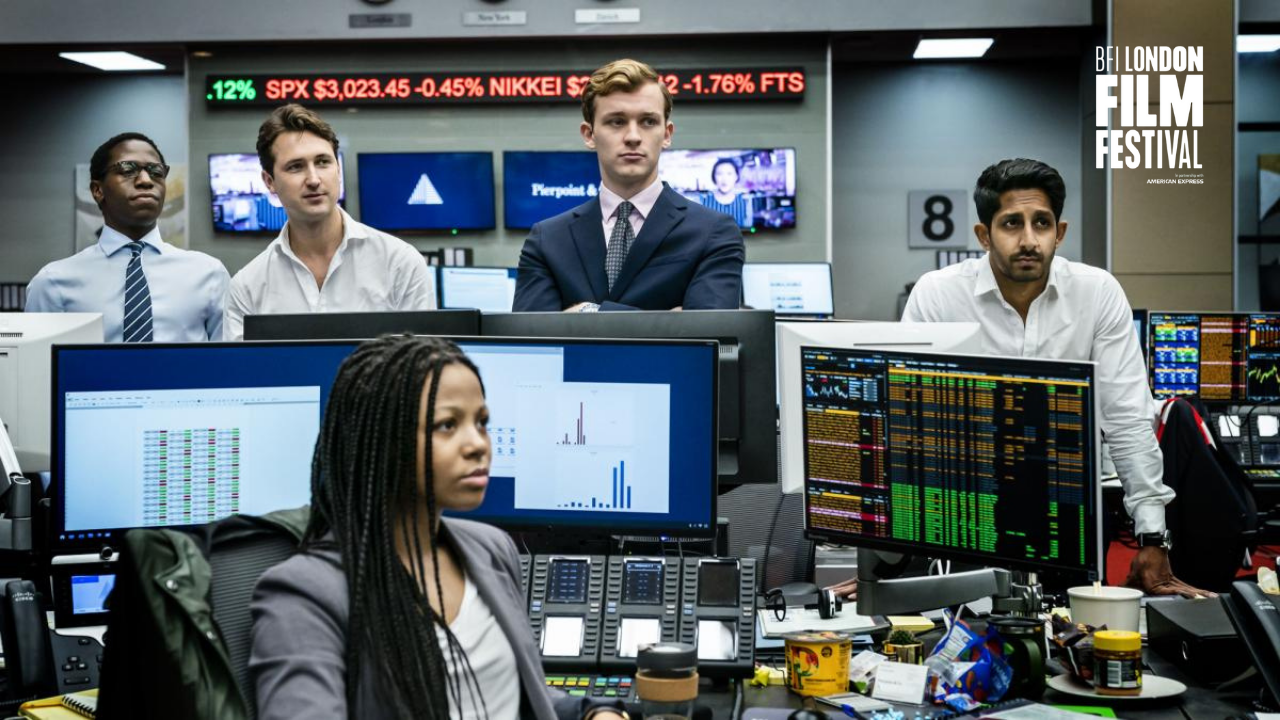 ‘Greed is Good’ were the words immortalised from the iconic 1980s film Wall Street, starring Michael Douglas, and this new series Industry captures this essence perfectly with its exciting tales of the outrageous antics of graduate investment bankers vying for a permanent role. Exhilaratingly, episodes 1, 2 and 4 screened during the London Film Festival 2020 providing a snapshot of the dynamic world of the graduates. Industry appears to nod to those hedonistic, toxic times of the 80s and 90s within the field of banking and practices that many banks distance themselves from nowadays.

Still, it is mesmerising to watch the levels of risk-taking, drunken debauchery, and the cut-throat practices exhibited in Industry by the graduates in a bid to succeed in such a competitive market. The opening scenes resembled an episode of The Apprentice with the blunt style of interviewing, one candidate is even requested to tell a joke, and it is clear that these graduates will do whatever it takes to succeed. The gleaming towers within the City of London will always seem seductive but imposing to an impressionable graduate, and many of us are likely to resonate with those initial feelings of being overwhelmed as a cog in the well-oiled machine of corporate life.

Whilst Industry emphasises the shiny, alluring side of corporate life present, within such a work hard play hard culture, it also presents the negative elements of being worked to death, literally. Industry follows American Harper, impressively played by Myha’la Herrold, as she navigates her way through London and the ruthless financial world, whilst learning to find support from her peers. Industry embraces the caricatures associated within finance where lunch is often perceived to be ‘for wimps’, but the junior members instead deliver it of staff for their entire team.  The bosses are brittly delivering corporate jargon to the graduates to embark on projects to embrace their ‘visibility’ which inevitably cues an inward groan as it is reminiscent of those cringe-inducing speeches from David Brent in The Office. Industry does seem to be self-aware with its tongue firmly within its cheek during some of the stereotypical aspects.

However, Industry proceeds beyond simple office banter with some graphic scenes, expected from a drama that has been ordered by HBO. These first few episodes have an array of talent directing them with Lena Dunham, of Girls fame, directing the first episode and Tinge Krishnan, director of Been So Long, directed the second episode with both women leaving imprints of their creative flair on such compelling episodes. The role of women within these early episodes of Industry is questionable.  There are a handful of women amongst the bosses and managers who are just as unsympathetic as the male bosses and utter phrases such as ‘young people are our capital.’ At the junior end of the spectrum Yasmin, one of Harper’s peers, ponders as to how she can make her teammates give her agency.  Harper’s retort is to take that agency. The trade-off is that the women are effectively competing by replicating the same toxic behaviour exhibited by the men in such a high-octane pressurised environment and engage in the same level of risk-taking, at times to their detriment.

Harper is offensively described as the ‘right, type of immigrant’ and indeed her inter-sectionality is unkindly discussed by peers within her earshot, which does make for uncomfortable viewing, stating that she should not expect to succeed due to being black.  Within that graduate pool, a handful of black and Asian graduates can be seen, highlighting that diversity remains an issue within investment banking and the corporate world in general. The series also examines the treatment of the graduates that are part of the LGBT community within this cut-throat world.

Industry, to match the banking environment is fast-paced, with quick edits and riveting storylines within the lives of the graduates.  It is brash and shocking but equally touches upon those themes that may not have been discussed overtly and will be one of those series to discuss in the work kitchen with colleagues. Despite the theme tune resembling a score from a 90s tv series and the traders only using two monitors on the trading floor, most have at least six; Industry will be one of those guilty pleasures to add to the watchlist. Plus, London looks extremely seductive in all of its glory from those City buildings to scenes of the Thames reflecting on windows which also makes Industry intoxicating viewing.

Related Topics:IndustryLFF 2020ReviewReviews
Up Next