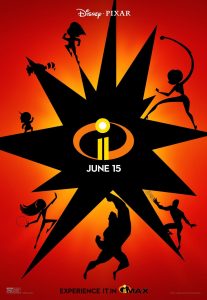 The Incredibles have returned. The superhero family first introduced back in 2004, are still doing their best to save humanity and lead a (relatively) normal life.

In Brad Bird’s sequel, the Parr family; Bob, Helen, (aka Mr Incredible and Elastigirl) and their kids, Violet, Dash and baby Jack Jack, must hang up their super suits after an opening epic battle with the villainous Underminer. After causing huge damage to the city and failing to capture the criminal, all superhero activity is banned and the family must cease their life of crime fighting. In a bid to turn around public opinion and allow all Superheroes to do their job, Winston Deaver and his sister Evelyn (owners of telecoms giant Devtech) reach out to Mr Incredible, Elastigirl and Frozone. Winston’s idea is that by adding cameras to their super suits, the public will see all the good work they do and not just what the media want to portray; thus turning around the Superhero ban. Elastigirl is chosen as the figurehead of the mission and is sent out to fight a new foe, Screenslaver, a villain who brainwashes people through the hypnotic use of television screens. This means that Bob (aka Mr Incredible) must stay at home and look after the house and kids, envious of his wife’s crime fighting adventures.

The quality of Pixar movies is undeniable and the attention to detail and ability to speak to both children and adults simultaneously is something few would disagree on. Incredibles 2 ticks most of those boxes, but perhaps lacks the iconic characters that Toy Story (for instance) delivers on. The villain here is actually not necessarily that memorable and the underlying subtext, a little odd. The Screenslaver seeks to control the minds of the population, who have become impassive slaves to television and consumerism. It’s a completely valid point, yet it comes directly from the villain and off the back of a movie that will undoubtedly be aiming to shift a lot of merchandise. Without meaning to sound churlish, it may provoke a little cynicism in the adult viewer.

These issues aside, Incredibles 2 does deliver fantastic, energetic and funny set pieces. The opening sequence of the family battling the Underminer is pure action / superhero movie gold and Elastigirl’s subsequent battles with Screenslaver deliver the excitement desired. You certainly can’t accuse Bird of not knowing his genres and he adds some nice comedy touches, such as Violet being recognised by a potential boyfriend only when she removes her mask. However, the most cherished parts of the film probably won’t be the fight against Screenslaver or even the character itself (who is not the most memorable of bad guys). It will be the family dynamic, which is actually the beating heart of the story. Ultimately this is a film about a family trying to do the best they can and there is huge fun to be had with Mr Incredible as the stay at home dad. The humour of watching him trying to help Dash with ‘new’ math and then failing miserably to help his love struck daughter Violet, is pitch perfect. It also serves to highlight some great points about parenthood and the defined roles we lead, not to mention the challenges that arise in all relationships.

I am happy to report that two other characters make a welcome return to the Incredible universe; Edna (the Incredibles costume designer) and Frozone (their superhero family friend), both reliably delivering more of what made them great in the first film. And let’s not forget baby Jack-Jack, who finally starts to display his (numerous) super powers. Morphing from fireball to demon baby, to racoon tormentor, to shooting lasers out of his eyes, this kid has it all. What he really needs is his own full length movie. He did get a five minute short in 2005, but we want more. People at Pixar, take note!

As the film heads towards the finale, there are not many surprises in store and even before Screenslaver is revealed, it does starts to feel a little predictable. Then again, perhaps that’s not terribly important. Whilst Incredibles 2 might not go down as a classic, it is a solid, fun offering. Treading similar ground to the original film, kids will undoubtedly enjoy the action and the visual gags. It may not satisfy parents quite as much, but is an enjoyable, quality piece of work and it’s nice to see Elastagirl (fabulous work by Holly Hunter) take centre stage in fighting crime.

Sicario: Day of the Soldado ★★★