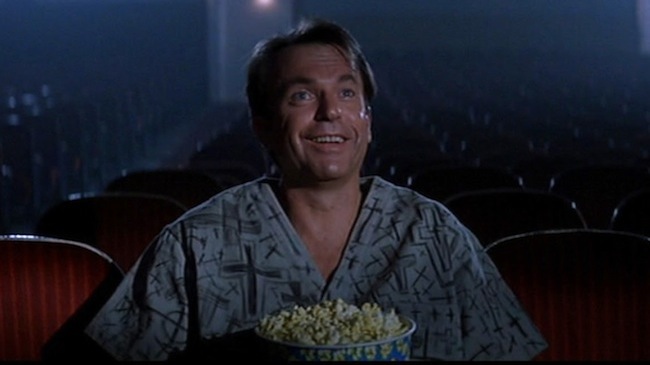 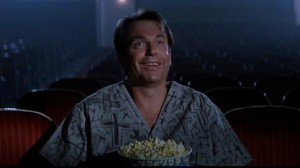 This was the first and only John Carpenter film I saw at the cinema and the year was 1995. I remember it vividly; I only had three and a half hours till I was due to leave to go to Glastonbury with my sister. There was a 1.15pm showing so I went. I loved every minute of it; the film is about the writer Sutter Cane whose books apparently have effects on its readers like disorientation, memory loss, paranoia. When Cane goes missing, publishing house Arcane are investigated by insurance investigator John Trent. His leads bring him and Linda Styles Cane’s editor to Hobbs End, a town in one of Sutter Cane’s fictional books.

John Carpenter’s most famous film is arguably the brilliant Halloween, but that does not necessarily mean it’s his best. Some people say his version of The Thing is his best work. It’s all to do with personal opinion. For me it is In The Mouth Of Madness, which is the third and last instalment of Carpenter’s Apocalypse Trilogy. The first is The Thing (1982) and the second is Prince Of Darkness (1987). Each one of them is not connected by story, only by the common theme of an impending end to the world.

The film is a tribute to H.P Lovecraft. Themes, ideas and character traits of this film are taken in part by Lovecraft’s own ideas and characters. Insanity is prominent in the film as it is in Lovecraft’s own stories, so you are given a Lovecraftian feel to the film. John Carpenter shows us how talented he is with In The Mouth Of Madness, giving us his best film as director. With an excellent performance (and his best) from Sam Neil (Jurassic Park) as John Trent, Jurgen Prochnow (Dune1984) gives a very good and creepy performance as horror novelist Sutter Cane. Julie Carmen (Fright Night 2) is fine as Linda Styles. Charlton Heston is also good as publisher Jackson Harglow. Also with the talents of David Warner and John Glover in supporting roles this film has a lot going for it.

In The Mouth Of Madness is a film about what is fantasy and what is reality, and it has been done very well. The end of the film is left ambiguous, so the truth about what is reality is left uncertain. It is left up to viewer to come to their own conclusions which to me is more interesting, and it fits in the film perfectly. I have always enjoyed films that end that way; they give you more to think about. Instead of endings where there is no doubt of the films conclusion.

The music is done by none other than John Carpenter and for this soundtrack he collaborated with Jim Lang. This is not the first time they have worked together; they also worked together on John Carpenter’s Body Bags (1993). I have to say this one great soundtrack from the beginning theme; I knew it was going to be at least very good. The changes are subtle, with eerie synthesizers from Carpenter that are constant all the way through the film. Also gentle pieces where there are breaks from the mayhem. With all his film scores which are uniquely John Carpenter themes and with In The Mouth Of Madness soundtrack you get the feeling of more depth. This is possible due to the solo guitar, lead guitar, bass guitar and synthesizers. I loved the theme song so much I have it as my ringtone for my phone. It is sad, but who cares…I don’t.

Unfortunately I was one of the few people who went to see this great film at the pictures, as it did not do very well at the box office. Boasting a budget of only $8 million and only breaking even by receiving just less than $1million extra in profits, it was major flop. Throughout the years since its release In The Mouth Of Madness has earned cult status, which is good because it shows that time has given people the chance to watch at their own leisure. Also to like and appreciate films like this for its merits and no influences from the media.