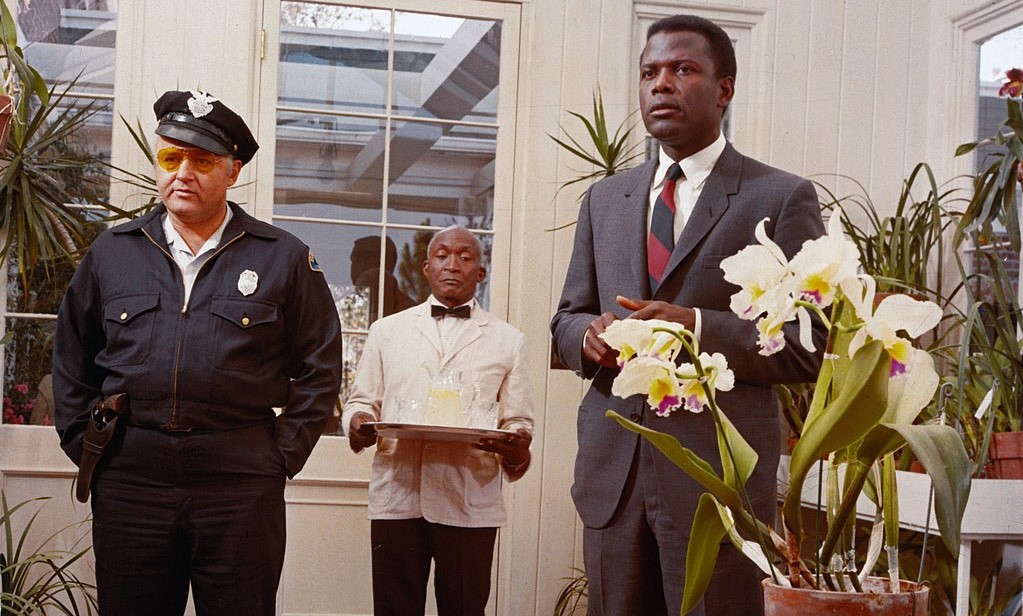 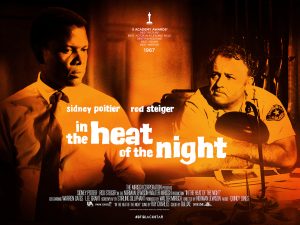 The year is 1967.  The American civil rights movement is at its height.  The Selma march had taken place two years before and 1968 would see Martin Luther King make the Mountain Top speech and be assassinated the following day.  The Civil Rights Act would be passed in the same year.

And the big Oscar winner for 1967 had its finger squarely on the pulse.  Norman Jewison’s ‘In The Heat Of The Night’ scooped five statuettes, including Best Picture and Best Actor for Rod Steiger.  It gets a re-release today, just short of its 50th birthday but leading the way in the BFI’s Black Star season, which celebrates black actors in cinema. To mark the start of the season, the BFI asked the public to vote on the best black performance on cinema or TV.  Athe top of the list came Sidney Poitier in ‘In The Heat Of The Night’.  No great surprise, as his declaration that “They call Me Mister Tibbs” is probably one of the best remembered lines in modern cinema history.  But it’s a role – and, indeed, a film – that’s bigger than just one line.

When a body is found in the Mississippi town of Sparta, the pressure is on Chief Of Police Gillespie (Steiger) to find the killer – and fast.  It’s not long before the first suspect is behind bars, a black man sat minding his own business at the railway station.  But he’s the first of a series of false starts because he’s homicide cop, Virgil Tibbs (Sidney Poitier), on his way back home to Philadelphia and innocently changing trains.  But his boss suggests he might want to offer his services to the local guys to solve the murder, so he finds himself working with people who make no attempt to disguise their hostility and prejudice – and some who want to run him right out of town, at the very least.

At its simplest level, the film is a police procedural and the sight of Tibbs examining the scrapings from underneath a suspect’s fingernails is more than a little reminiscent of franchises like ‘Law And Order’ and, more latterly, ‘CSI’.  But the murder is essentially just a mechanism to bring Tibbs and Gillespie head to head.  The overt racism of the police, the powerful businessman Endicott (Larry Gates) who slaps Tibbs’ face for insolence and is slapped back in return, and the mayor, who puts pressure on Gillespie to sort out the case.  And the local rednecks, who corner him in a disused factory with only one thought in mind.  The sound of jangling chains has never been so sinister.

It’s a film that boasts a fine supporting cast, but your eyes are always on Poitier and Steiger.  They’re hardly ever off the screen, either individually or together.  Poitier spends a lot of time barely keeping his anger under control, his stares of outrage speaking volumes.  Frustratingly for everybody around him in Sparta, he’s a whole lot smarter than them and is the reason why every single suspect Gillespie puts in jail turns out to be innocent.  The scenes between the two cops crackle with animosity bordering on hatred, with Steiger getting the lion’s share of the sharpest lines and delivering them like a flamethrower.  If there’s an arc in the main characters, it belongs to him: when Tibbs leaves at the end of the film, Gillespie carries his suitcase to the station.

Nothing about the film has faded, not the performances, the story or the tight as a drum direction.  It resonated in 1967 and it’s equally relevant now, making the timing of its re-release exquisitely pertinent.  Viewed through the prism of today’s politics, it leads you to a depressing conclusion.  Perhaps we haven’t learnt much in the past half century.

Fantastic Beasts And Where To Find Them