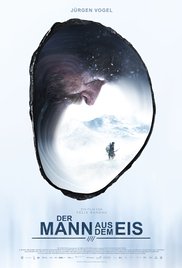 Set 5300 years ago, Iceman tells the story of Kelab, the famous Neolithic man found frozen in the ice millennia later.

Living in a small community, Kelab’s responsibility to be the keeper of the group’s holy shrine Tineka. While Kelab is hunting, the settlement is attacked and the members of the tribe are brutally murdered, amongst them Kelab’s wife and son, only one newborn survives – and Tineka is gone. Blinded by pain and fury, Kelab is out for one thing alone – vengeance.

He fights for the infant’s survival and against the forces of nature, while a potentially fatal error turns Kelab from hunter to hunted. Along with the physical trials, the loneliness causes Kelab to doubt his actions more and more and when the opportunity presents itself for revenge, Kelab’s greatest challenge is realised.

With the story told through an early form of the Rhaetic language there is no dialogue to speak of, at least none that can be comprehended. The filmmakers also opted to avoid the use of subtitles; This means there is nothing to distract the viewer from the plight of Kelab. The sounds of the mountains entwined with a engrossing score means that the film becomes intrinsically immersive and results in a rather unique cinematic experience.

There is a huge amount of artistic licence with ‘Iceman’ as there would be with any film that features a lead character that’s been dead for 5000-plus years. Experts have given their theories on what happened prior to his death, but the truth is no-one really knows for sure. It’s this freedom that the filmmakers have played with. It’s delivered well throughout, but unfortunately as we know the eventual outcome of Kelab’s story, it has to eventually address that. Regretfully it’s climax is slightly underwhelming. We’ve experienced this brutal struggle against fellow men and the elements and then, it’s over, far too quickly.

It’s also a shame that we don’t have the post-feature photos/information of the original Iceman – this may just be a personal preference – but for films based on real characters it’s always a neat reminder that the struggles depicted, were undertaken by a person that actually existed, however long ago that may have been. This might have been the decision of the filmmakers due to the fact that the story is based on an assumption of the events leading up to the Iceman’s demise, or perhaps it was beyond their control.

With unforgiving locations used throughout the film, praise must go to the crew and cast. Creating features such as ‘Iceman’ require not just talent but also a strong dedication to create an accurate depiction of the environment and experiences these people faced. These locations also create some stunning landscape shots and the cinematography by Jakub Bejnarowicz should not got without praise.

Iceman is, overall, a triumph. Let down only by a slightly rushed ending. It’s an immersive film that strips down story-telling to it’s bare esssntials. It’s lack of dialogue requires the viewer to make their own assumptions of Kelab’s motives and actions. We see his inner conflicts depicted not through words, but through actions, occasionally brutal; often remorseful. He’s a man ridden with anger on a path that he was forced to take to avenge the atrocities committed against his tribe and family.

Not to be missed.