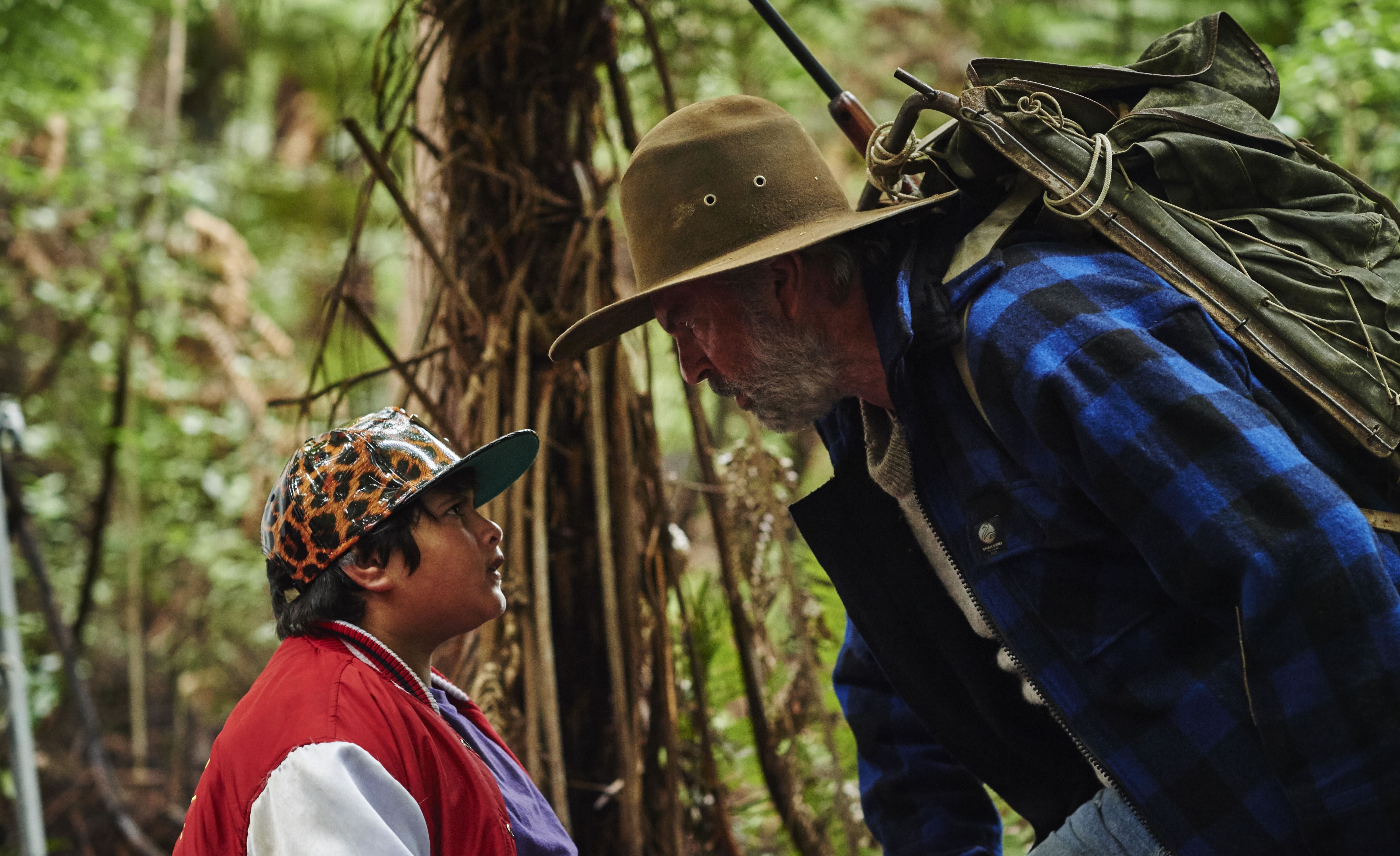 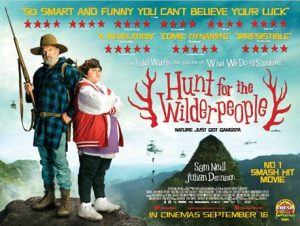 One of the unexpected pleasures of 2014 was vampire mockumentary, ‘What We  Do In The Shadows’ – probably best described as ‘Spinal Vamp’ – which sprang from the fertile imaginations of New Zealand’s Taika Waititi and Jemaine Clement.  The pair are now working on sequel under the title ‘We’re Wolves’ – if you saw the original, you’ll get the gag – but Waititi has also been courted by Hollywood.  He’s co-writer of Disney’s ‘Moana’ which opens later this year and 2017 sees him venture into super-hero territory, as director of ‘Thor:Ragnarok’.

Before then, we can snuggle down contentedly with his latest comedy, one that captured the hearts of this year’s Edinburgh International Film Festival.  Since scooping the Audience Award, ‘Hunt For The Wilderpeople’ has been on plenty of must-see lists.  And with good reason.

Teenager Ricky (Julian Dennison) has been passed from foster home to foster home.  His latest belongs to Bella (Rima Te Wiata) and Hector (Sam Neill) and, despite it being on the edge of the bush and deeply unappealing for the young wannabe gangster, he starts to feel safe and decides to stick around.  But when Bella dies suddenly, Child Services want to place him elsewhere: he’s having none of it and sets off into the bush – with Hector on his trail, determined that the boy will be taken off his hands.  The mis-matched pair find themselves living off the land for months and sparking a full scale manhunt to track them down.

As both writer and director, Waititi has shifted from parody to something very much rooted in his native New Zealand, with a tone and humour that’s bone dry, slightly world-weary and not averse to giving modern life a dig in the ribs at the same time.  Much of that humour comes from the characters themselves – the grumpy Hector, the rebellious Ricky, the child-hating Paula (Rachel House) from Child Services.  But he can’t resist a ‘Thelma And Louise’ send-up towards the end.  It isn’t chuckles all the way, though: when Bella dies, all you can hear are Hector’s howls of anguish and it’s unbearably sad.

Modern life is poked in the eye with gusto.  The craze for selfies has spread all the way to the New Zealand bush and is a favourite target, especially as “selfie” now just means a photograph of any description.  There’s Ricky’s lurid clothes and ambitions to be a gangster and a drug dealer, all part of his “bad egg” reputation.  And there’s the references that will mean more to New Zealand audiences.  Apparently the country’s child protection provision doesn’t enjoy the best of reputations and Paula from Child Services, with her shallow, oft-repeated “no child left behind” mantra, reinforces that.  For audiences further afield, she’s closer to a latter day Nurse Ratchet, cold blooded, in the wrong job and, at times, as childish as the youngsters she’s supposed to protect.

Even if the film does owe some of its tone to Wes Anderson’s ‘Moonrise Kingdom’, it still stands resolutely on its own, a mis-matched buddy movie with an offbeat sense of humour.  As a feelgood story, it’s refreshingly untainted by even the slightest hint of sweetness.  And the cast are all perfectly in tune, especially Julian Dennison’s Ricky, with a resentful stare that melts into a smile when he’s given the encouragement he so desperately needs.  But, as it happens all too rarely, he resorts instead to decidedly average haiku, which he’s been taught as a way of expressing his emotions.  Even Waititi himself contributes a cameo as the eccentric minister presiding over Bella’s funeral.  He’s seriously bad at his job – or, to use Ricky’s words, he sucks.

The film, though, doesn’t.  It’s one long chortle and occasionally something a bit louder.  It may not quite be, to use one of Ricky’s own words, “majestical”, but it’s certainly spiky, smart, funny and endearing.  ‘Hunt For The Wilderpeople’ is a real find.