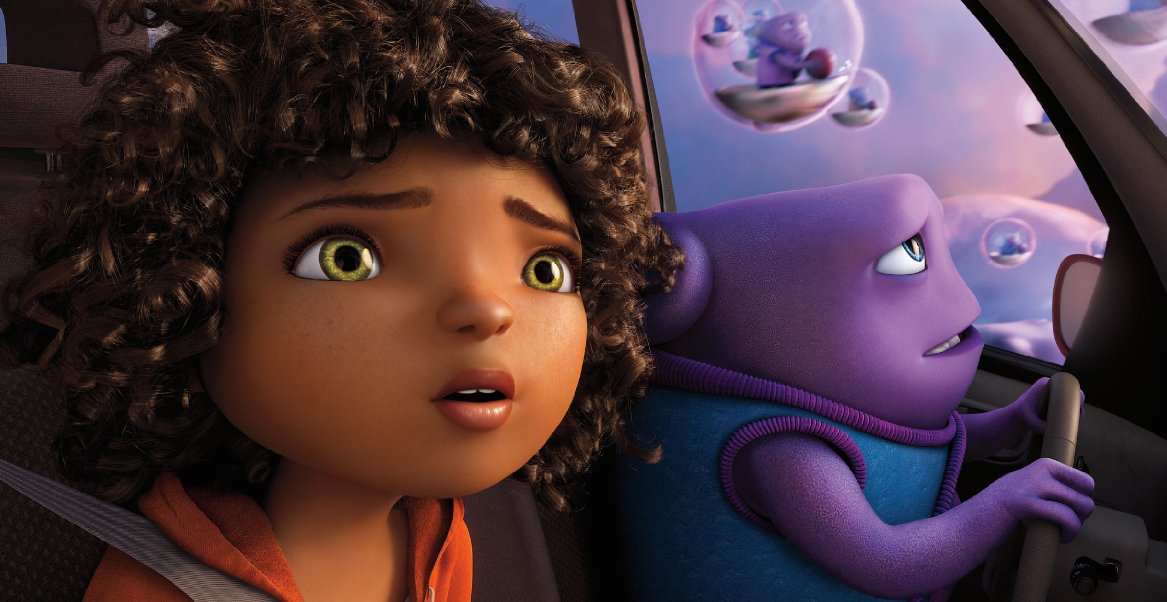 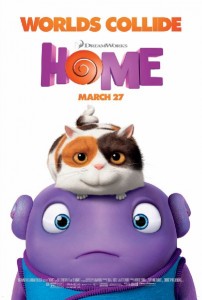 If I didn’t know better, I would say Dreamworks Animation is starved of good ideas and major talent. They gave us Shrek, Madagascar and Kung Fu Panda, but then after a slew of sequels to those movies, really lost their way, How to Train Your Dragon notwithstanding.

Whereas Disney alternates classic fairy tales (Frozen) with hip video-game, superhero inspired stuff (Wreck It Ralph, Big Hero 6), Dreamworks abandoned its satirical edge for children’s books (Cressida Cowell’s How to Train Your Dragon novels) and cartoon characters no one outside of the USA has heard of (Mr Peabody and Sherman).

It’s like the fight has gone out of them. What with Pixar, Blue Sky and Sony Animation, Dreamworks can’t cope with the competition. Nowadays, kids are spoilt for cartoons. When I grew up, all I had was Pete’s Dragon. No wonder Star Wars changed my life.

Home is adapted from a children’s book by Adam Rex, The True Meaning of Smek Day. The film tells the story of Oh (voiced by Jim Parsons), an alien member of a race called the Boov that is in constant flight from an enemy called the Gorg. Having been rumbled, the Boov escape to Earth and relocate all of mankind to Australia – though I’m not convinced that they looked at Alaska, but we’ll let that pass. All of the major cities have been purged of humanity – in the nicest possible way of course, we wouldn’t want kids wondering whether the Boov are going to take over their house and whether they’d remember to feed the fish. However, one young girl, Gratuity or Tip (voiced by Rihanna) has been left behind, having escaped the Boov by hiding under her cat. She wants to be reunited with her mother at all costs.

Oh has been expelled from his apartment building for issuing an open invitation to a house warming party that no Boov wants to attend – they cannot be Boov-ered. In a few short hours the invitation will be received by the Gorg. They will find Boov on Earth and Boov will be annihilated.

But Oh meets up with Tip and after an initial encounter in which Oh is locked in the fridge (‘can I come into the out now?’) the two of them team up to fulfil their respective quests. Meanwhile Captain Smek (Steve Martin), the Boov’s cowardly saviour – I suspect he has never paid a check – sets the Boov’s biggest brains to guess Oh’s email password.

Home is notable for Oh’s unusual way of speaking – elongated sentences and never referring to the Boov as ‘we’. He is not a character that attracts ready identification on the part of kids, though at one point he exclaims in a trembling voice, ‘my arms are in the air like they just don’t care’. Parsons is perfectly cast in the role but I could not understand why Tip could not be voiced by an actual child actor. Surely the role didn’t need a star name. As for Steve Martin, I remember when he waved his arms in the air like he didn’t just care. Now the former ‘Wild and Crazy guy’ barely raises a laugh.

The colour scheme of Home is pinks and blues – bubblegum style. There’s a big finish that’s a tiny bit corny – we learn what motivates the Gorg, and it is as disappointing as the Kragl from The Lego Movie. The ending lacks an emotional punch, even though we are in E.T. territory. Dreamworks needs to take time out to re-think its positioning in the market. Home might do okay on home video.

The Town That Dreaded Sundown