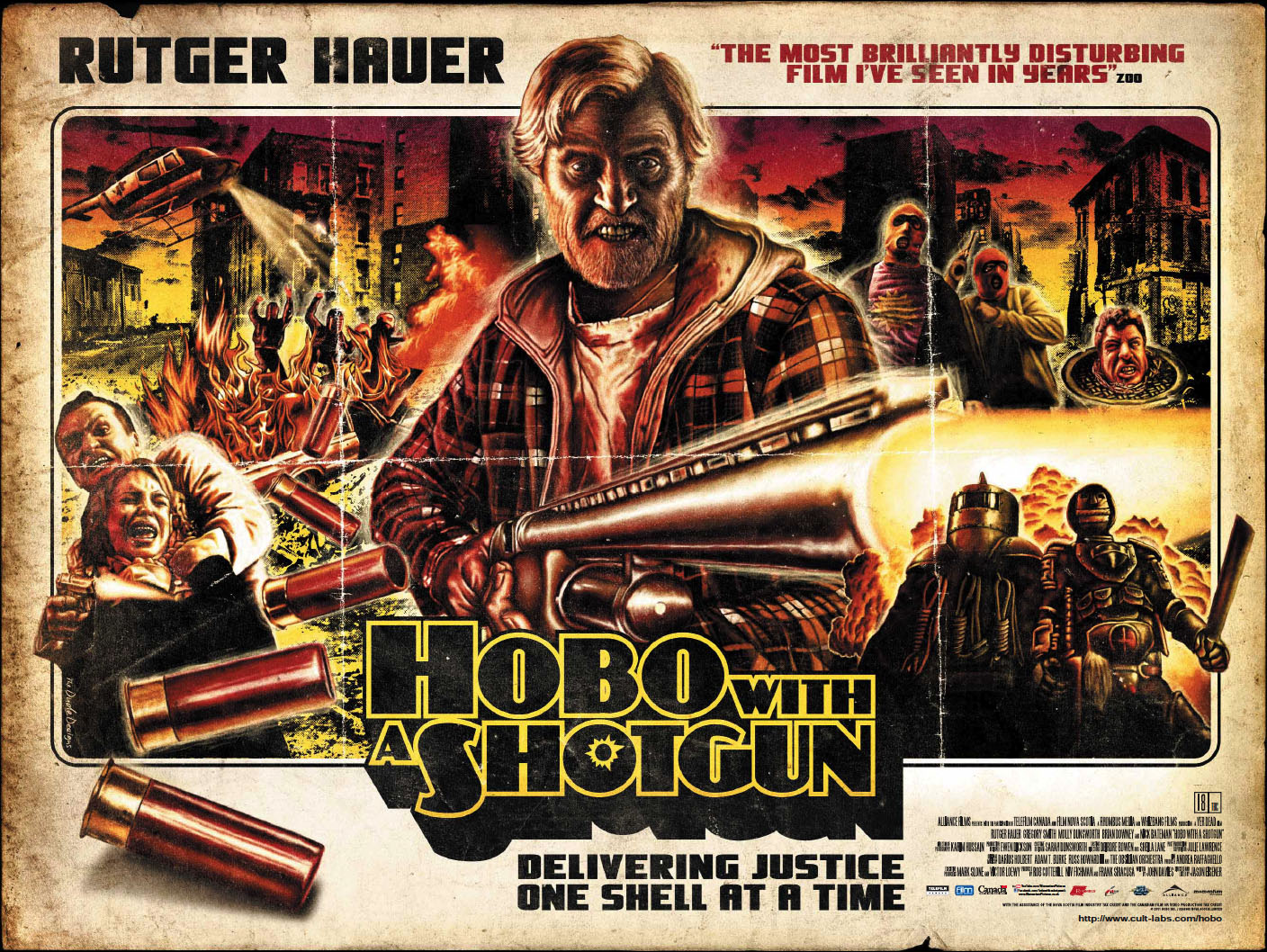 Hobo With a Shotgun 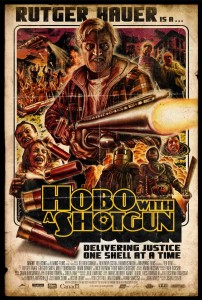 For me watching a grindhouse movie is like eating one deep-fried banana split after another – the more violence, killing, and torture you watch the worse you tend to feel. It’s easier to take these scenes in moderation, but I understand that is not the grindhouse way.

Take a hobo, a shotgun, ultra-evil thugs, a manhole cover, prostitute, and a whole lot of gore and you’ve got HOBO WITH A SHOTGUN. These movies never have any noble characters, and HOBO WITH A SHOTGUN is no different, with possibly the exception of the prostitute the movie tries to get us to care about, unsuccessfully at that. Made in the classic 80s B-movie style, the movie doesn’t try to convey any deep messages. It’s out there, in your face, and larger than life. Through unique camera angles we get to see some very intense action sequences in a whole new light.

The campy/cheezy style  (including plenty of red & bright/vivid colors) in which the movie is made contributes to the overall experience. After watching the opening scene where the bad guys (a dad and his 2 corrupted sons) sever someone’s head in a most unique fashion I was tempted to turn it off. It wasn’t so much for the violence as it was I just thought I would be in for a long and dreaded ride. Neither happened.

The plot is very straightforward – a homeless guy gets sick of bullies running the town, including the local police force they are in cohorts with, and decides to go on a rampage and stop the madness. Along the way a prostitute he rescues befriends him and they join forces to increase their odds. Both suffer some serious scrapes by the 2 evil brothers (equipped with matching outfits, shades, and matching attitudes), and the stakes get higher and more people work to track them down.

Not only did the film move along quickly with action sequences very difficult to look away from, but most of the performances were quite fun to watch in a smutty way, and how can you go wrong with Rutger Hauer? He did, however, bring a kind of tough guy Clint Eastwood feel to the role.  The bad guys were so evil you’d think that they were born without a soul or any inhibition. You just had to see them get theirs in the end. In order to not be offended it’s important to take a humorous attitude to a grindhouse film like this, that apologizes for nothing, and pushes human mutilation, abuse, and violence to the max.

Although campy, it still felt like a knockoff of a knockoff, aka DEATH PROOF and PLANET TERROR (ironically director Jason Eisener worked on these films). Lots of cliched lines from the female lead, while disappointing, nonetheless staying true to the genre.