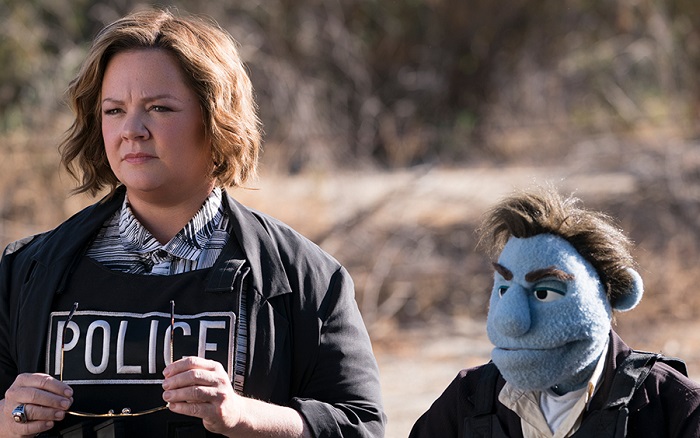 Melissa McCarthy’s latest comedy, raunchy puppet flick The Happytime Murders, has suffered a serious beating at the hands of the critical press.

But as The Nerdist’s Todd Gilchrist wrote in his review, the picture just doesn’t work: “Irrespective of the fact that Peter Jackson paid satirical tribute to Jim Henson almost 30 years ago with his misanthropic cult film Meet the Feebles, Brian’s puppets smoke and swear and have sex and do drugs, but so much of it seems driven by the urge to shock rather than tell a story … Ultimately, The Happytime Murders feels like half of two good ideas that don’t add up to a whole, undermining the core of a world that’s genuinely interesting by focusing too heavily on its fuzzy, raunchy edges.”

Richard Lawson of Vanity Fair was considerably less kind, writing: “Not a single bit lands in The Happytime Murders. McCarthy sometimes comes close, as does [Maya] Rudolph — but what surrounds them is so aggressively, lamely crass that it would take a true Herculean effort to elevate anything in the film to laugh-worthy. And so, one must sit through The Happytime Murders in rigid silence, as puppets are killed and groped and seduced and exploited to the point that I started to feel bad for them, before remembering that none of it was real and nobody had to make this if they didn’t want to.”

CNN’s Brian Lowry kept up the assault, stating: “It’s hard to overemphasize the extent to which the puerile humour yields diminishing returns, as the filmmakers (Henson and writer Todd Berger) hammer away at dirty-puppet jokes to the point of wearing holes in them.”

Chris Nashawaty of Entertainment Weekly called the film “a botched experiment that inexplicably wastes a profanity-spewing Melissa McCarthy and is hobbled by a lead character (chain-smoking puppet PI Phil Phillips) who resembles Guy Smiley crossed with Jerry Orbach and whose deadpan monotone (provided by Bill Barretta) is likely to put you to sleep.”

Finally, Charles Bramesco of The Guardian offered the most brutal assessment of all, writing: “Perhaps all of this dysfunction might approach the so-bad-its-good realm of morbid curiosity, if not for the half-baked bid at racial commentary fleetingly suggested in the first act and abandoned within the first hour. (The allegorical leanings of Bright have never looked so tactful). Or maybe it’s the questionable mechanics of the grand scheme, revealed in the denouement to make nary a lick of sense. Or maybe it’s just that the film is brutally, oppressively, exhaustingly unfunny. Except, that is, to viewers who find octopus-on-cow octuple-handjob money shots humorous. They are in luck.”

The Happytime Murders is due for release in UK cinemas from the 27th of August, rated 15.