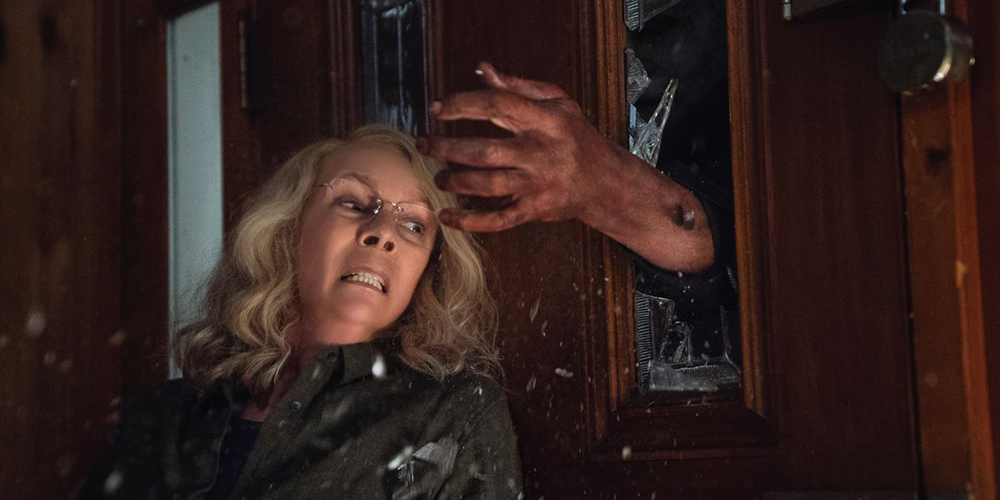 Beaten in its number of reboots only by Eleanor Shellstrop, the original slasher returns to our screens in… well, Halloween. Yes, that trend of naming your rebootquel shows about as much chance of dying as the ghostly faced central figure of the genre-defining series, with David Gordon Green and co-writer Danny McBride (no, really, that Danny McBride) reviving the now-forty year-old franchise for this erstwhile fourth attempt at a revival.

This time around, all bets are off as the series reverts to a sort of “Part 2B” and everything in the aftermath of director John Carpenter’s iconic 1978 trendsetter is washed away in favour of a new timeline. Here, Michael Myers was caught moments after the close of the first movie, his days since spent in total silence as the resident of a psychiatric hospital. Not to be outdone, however, Myers’ only surviving victim, Laurie Strode (Jamie Lee Curtis, the queen of scream returning to that which made her so), has become a prisoner entirely of her own trauma. Holed up in her isolated rural home, Strode’s gone a bit Sarah Connor in the years since her ordeal – becoming a self-styled mistress of self-defence, and forsaking her relationships with her own family as a result. That sacrifice won’t be for nought though, when, forty years to the day since his infamous killing spree, a prisoner transfer gone awry sees Myers unleashed once more.

As reverential rebootquels go, Halloween’s probably best compared to the likes of Bryan Singer’s rather polarising Superman Returns – at least by virtue of its concept. In execution, Halloween instead fares better in contrast to its own prior reboot, H20, by way of serving as a continuation of an established classic aimed squarely at another audience entirely. This time around that audience may well be a fanbase more than primed for what’s to come, but with a more generational sensibility in mind (again, see H20’s pursuit of the post-Scream crowd). As such, the return of Curtis comes with a brilliantly unspoken on-screen fanfare, her every line as (the wonderfully broken) Strode a sharply chiselled slice of cynicism crafted that way for maximum brutality. Imagine Ripley never got to meet that xenomorph queen, but spent four decades preparing instead – that’s the level of trauma we’re talking, and Jamie Lee Curtis sells the hell out of it.

Behind the camera, the game’s played as proudly. With Green’s direction never beholden to Carpenter’s seminal progenitor, but knowing just enough of the cues to borrow to make a decent go at a bit of fan service without inducing the usual level of eye-rolling. There’s some great stuff in here, with a tracking shot even Carpenter’s jaw would hit the pavement for, and some truly inventive sequences that could easily rank among the series’ best. What it’s not though is in any way particularly original, with a storyline unlikely to keep anyone – newcomer or series mainstay – guessing, and serving largely as a “they don’t make ‘em like this anymore” run around a gentrified block. It looks great, it plays well, it just… isn’t that new.

For everything that works about Halloween (Judy Greer getting a decent role, for a change, easily ranks among them), there’s something that just doesn’t work quite as well (a largely phoned-in Loomis stand-in more than deserves to be greeted by Curtis with “so you’re the new Loomis…”). On balance though, Green and McBride bring enough fun and a couple of solid chills to Halloween to wring a solidly good time out of a largely average revival flick, doubled down by a deliciously nostalgic score by none other than Carpenter, among others. It’ll delight, engage, and captivate anybody looking for a good ol’ fashioned slasher at the movies, and, as rebootquels go, it more than tops Superman Returns. But, to be fair, Busta Rhymes never drop-kicked Superman between his reboots.