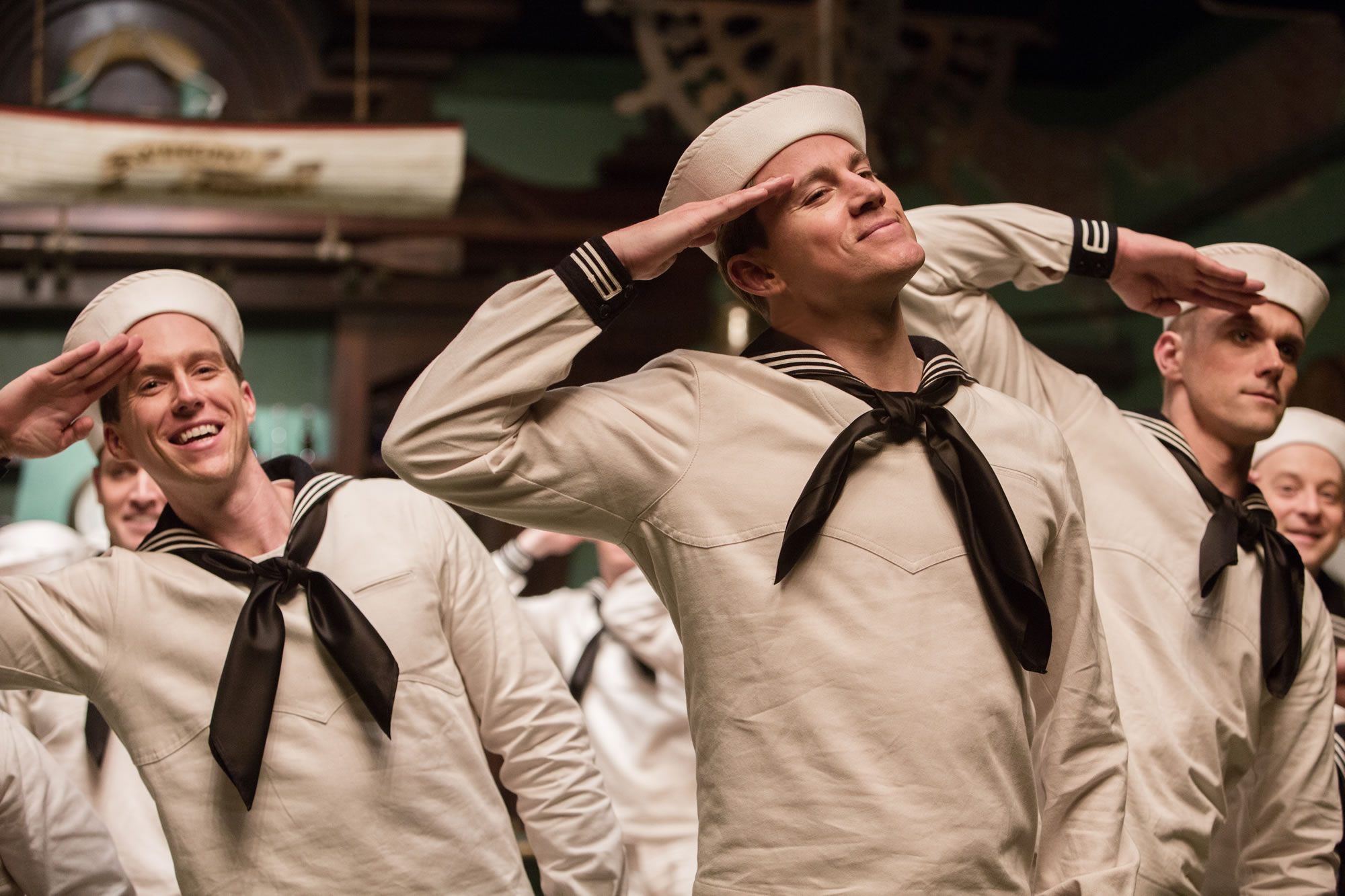 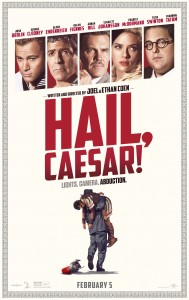 The latest from storied writers and directors the Coen Brothers, Hail, Caesar!, is what some would label a zany comedy. It is a lark in many regards, a film where there seems no other intention by the filmmakers other than to create an amusing escapade and in this regard the film genuinely succeeds. The most outward thing one could say about the film in fact is that it is exceedingly charming and fun, that the Coen’s have given themselves a set-up that allows them to explore all of their favorite genres of movies in Hollywood’s golden age and that they take this opportunity and run with it. Casting the likes of current movie stars such as George Clooney, Scarlett Johansson, and Channing Tatum and placing them within the context of what types of movie stars they might have been in the 1950’s is an incredibly appealing idea and the opportunity to see Clooney channel bits of Clark Gable, Johansson essentially play Esther Williams, and Tatum do his version of a Gene Kelly number is what sells the film. These movies within the movie are what make the film worth recommending in a sense despite the fact Josh Brolin is doing a good job carrying the connective tissue between each even if, somewhat ironically, he doesn’t have enough to do. If you’ve seen the trailers for the film then you know the overarching plot concerns Clooney’s Baird Whitlock, the biggest star in Hollywood, being kidnapped and held for ransom by a group who refer to themselves as “the future”, but this turns out to be not so much what the movie is about rather just a small piece. Instead, as most Coen pictures do, Hail, Caesar! wants to be about something more and this time the Coen’s are exploring that very thing-the worth of the movies, of stories even. Words like frivolous, flippant, lighthearted, silly, and any other synonyms of sort are used consistently throughout forcing our protagonist, Brolin’s Eddie Mannix, to search his soul to find a reasonable rebuttal to validate not only the movies he and his studio are making, but his livelihood. It’s true that the movies have a platform like no other and that they have the power to influence certain demographics, but beyond the Coen’s attempting to convince themselves of these same things as they grow older in age, there isn’t much to grasp onto here or there is too much and none of it ends up making the impact it should. Either way, Hail, Caesar! is still a rollicking good way to spend an hour and forty five minutes even if it is a minor work in the Coen pantheon.

Beginning with an ominous shot of a crucifix hanging over the camera and then transitioning to an expertly lit Brolin as Mannix sitting in a confessional and the first few minutes of the film make you think this is something entirely different than it turns out to be. Of course, this looming image of Christ as he hangs bloodied and beaten on the cross plays largely into the facets of who our main character is and begins a throughline of discussions about faith and other forms of belief that make their way in and out of the film. This initial image of Christ though, reminds us that he died for our sins, it reminds us of His saving grace and in essence that is what Mr. Mannix is for these movie stars. Why Mannix is in the confessional booth boils down to little more than he bummed a few cigarettes when he told his wife he was going to quit, but no less than a few hours later he is on the lot of Capitol Pictures and is working every angle he can to make his stars as appealing as possible and his movies equally as profitable. In short, he is working to spread the word of his own personal Gospel in as effective a way as possible, a way where it might reach as many people as it has the potential to. At the same time, Mannix is deliberating over whether or not to take a different job at an aviation company that would guarantee him better hours, a ten year minimum contract, and stock options that would more than secure his financial future, but he simply can’t seem to turn his back on the pictures. Every day Mannix is out there sacrificing himself for both his movies and his stars, making them as appealing as he can, washing away their sins if you will, so that when their movies arrive at the local multiplex they are greeted with love and forgiveness by the ones who will judge them most harshly. Trust me, it’s not that much of a reach and it creates a sense of mysticism about the film that I think the Coen’s like given they seem to be heavily fascinated by how the teachings of such figures influence countless people’s lives. After all, Jesus ultimately wants us to prove to him in the way we live our lives that we were a bet worth investing in and what does a studio head want more than to know his investments will pay off in the end?

What the broader implications of that might be as far as what the Coen’s are trying to say could go many ways, but it is noteworthy that they’ve tried to discuss something so profound within the context of what is, on the surface, that zany comedy I mentioned earlier. Still, while there is obviously a fair amount of substance attempting to be conveyed through these in-between portions that depict Mannix going from set to set and problem to problem it is these moments that also tend to make the film lag. Brolin’s character of Mannix is always on the run, always has another meeting to attend, or phone call to make, but other than creating this analogy I spent the previous paragraph trying to explain so that audiences might come to some type of epiphany in the end about how we all need to find purpose in our daily excursions, the actual movie we’re watching is most enthralling and most fun when it allows itself to indulge in the setting it has made for itself rather than indulging further in whatever point it is trying to make. While the inability to not try and say something more might ultimately hinder their latest film, the Coen’s also have a brand of humor all their own and know, without a shadow of a doubt how to pull that off. It is the conveyance of such big ideas through this humor and commentary that makes the film work and the themes felt, even if they ultimately weren’t as necessary to this story as they are to some of their heavier works. The Coen’s have always had a knack for analyzing the outlandish elements of our nature and pulling out the comedy in as much and in our nature to build huge sets and wear ridiculous costumes for the sake of creating something that is ultimately rather self-congratulatory and indulgent they have analyzed themselves and questioned if what they’ve been doing for the past thirty years will be worth anything over the next thirty. Through this lens, Hail, Caesar! is an exercise in self-discovery and admitting to themselves that even if their films fail to live on that they simply cannot go on without the promise of creating something new. It may not mean something to everybody, but it means something to them. That the Coen’s have parlayed this existential discussion into an excuse to create multiple short films in the vein of any number of movies from Hollywood’s “golden age” is just a bonus for audiences as, despite my bewilderment after walking out of the theater, I was grinning almost the entire running time.

Hail, Caesar! feels like one of those movies, especially one of the Coen’s movies, where once I watch it two or three more times I will come to notice things I didn’t upon this first viewing and enjoy it all the more. For all the talk of trying to find meaning in this haze of quirkiness or meaning in this compilation of Hollywood’s greatest hits the film is most enjoyable not for its attempts at eliciting meaning, but for creating an homage of sorts to an art form the directors clearly adore. While Hail, Caesar! may be something of a perplexing hodgepodge of ideas to some, for those who love movies it is an exquisitely written love letter that you wish hadn’t strayed off topic for as much time as it does. Out of the many revelations that prove to be insanely fun, the front-runner and clear MVP is Alden Ehrenreich (Beautiful Creatures) as Hobie Doyle, a Roy Rogers type who stars in countless Westerns and was picked up not for his talking skills, but for the way he could swing a rope and strum a guitar. Ehrenreich’s Doyle is a rather unencumbered type of star who comes in, does as he’s told, and goes home counting it all in a good days work. He has no wife as he seems slightly too offbeat to carry on a legitimate relationship and he has no further ambition than what he has already achieved. So, when Mannix decides to pull Doyle from the set of his latest Western into the world of real drama things get as complicated in his world as they’ve likely ever been. A scene in which Doyle comes face to face with his new director, Laurence Laurentz (Ralph Fiennes doing a version of Laurence Olivier), gives prime example to the type of situations Mannix and his actors create for which they eventually have to find a way out of.

A scene in which Mannix and a rabbi, Catholic priest, protestant minister, and Eastern orthodox priest all discuss the depiction of Christ in the movie from which this movie takes its name is worth mentioning as it’s the best in the film and a prime example of all the Coen’s do best in mixing comedy, commentary, and complex ideas. Tatum’s tap dance sequence, on the other hand, may be the most entertaining bit of the film while Clooney, doing his typical Coen doofus routine gets the short end of the stick as his “conspiracy” storyline somewhat runs out of steam. If you’re going to see the movie for the likes of Jonah Hill (though his small scene is rather charming), Johansson, or even Tilda Swinton (playing some versions of Hedda Hopper and Louella Parsons) know they’re only in the film for a few minutes a piece and that this is largely Brolin’s show with Ehrenreich coming out periodically to steal the show. All of that said, Roger Deakins photography elicits real moods of the old Hollywood films they are emulating and Carter Burwell’s score is having as much fun as the film is reveling in this period of time. And so, in the end, Hail, Caesar! may not be a game-changer of any sorts, but it does have value and it does show worth and I think that’s all the Coen’s were after this time out.

You can also now check out my new film review show called INITIAL REACTION. Look for a new episode each week. Here is our review of Hail, Caesar!: