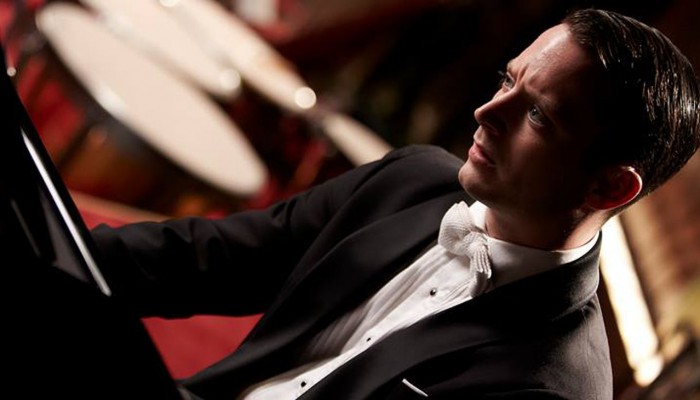 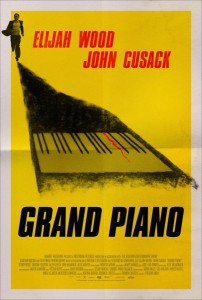 After five years passed since a horrible bout of stage fright, concert pianist Tom Selznick returns for a come-back performance in Chicago. But when he begins playing, he notices a threatening note on his sheet-music warning him that if he makes one mistake he will be killed.

Mira employs the nervous craft of Elijah Wood (and an obvious body double or um, hand double) that we have all become familiar with seeing him with his Frodo Baggins character in Peter Jackson’s Lord of the Rings franchise. That same energy works very well here. Young man with a sort of deer-in-headlights look, with a precise goal to be achieved but faced with adversity. Wood isn’t necessarily an actor with a lot of range, but one who can deliver when cast properly (unlike one of the other actors in the film to be mentioned soon). His Tom character shows an immediate sense of inner torment. Trying to overcome his past disaster, he struggles to maintain composure before he even arrives at the concert hall. White-knuckling the plane ride, not because of the fear of flying but the fear of landing in the city where he must perform in six hours. When he does arrive at the hall, his reception is lukewarm at best. The dapper crowd may have come with open-minds, but the stage-hands still have a bad taste in their mouth. Even the local radio station has low expectations. All methods in which you are shown how much of a calamitous embarrassment that last performance was five years before. There is a lot riding on this performance. Besides the obvious chip on the shoulder, he probably also feels obligated to prove his value to wife Emma (Kerry Bishe). With all of the effort involved in actually GETTING to the piano, you would almost think that his work is halfway done. That is, until you realize how complex and demanding the body of work is that he must gruel through.

The camera jumps around from close ups of the cold sweat dripping from Tom’s forehead, to the fingers rapidly jumping around the piano keys, to wide shots of the stage from the crowd’s perspective (and at times of course, the villain). Besides the obvious black and whites of the piano keys, you see a lot of red in the film, much of which is cleverly used from the curtain fabric. When exploring a massive Concert Hall like the one shown, the curtain itself at times has a disconcerting feel to it. Almost like there can be haunting elements hiding in the folds. Cue the low octaves his finger hits, and then when you realize how sophisticated the work is that Tom is playing you really feel the almost inevitable doom if Tom happens to misstep (again).

While Wood is a good fit for the Tom Selznick character, the same can’t be said about John Cusack with villain Clem. Cusack, who hasn’t really had a remarkable performance since 2000’s High Fidelity, continues to disappoint on screen. Perhaps because he is typically misused these days? Clem’s character could have and should have been more menacing, more threatening, more imposing. But Cusack just doesn’t have that in his repertoire. He could provide a much better service to film (not this one) if he continues to play the hopeless romantic sappy guy. Can’t fault him for trying to branch out, but he’s had many chances to prove himself in the darker roles (Identity, 1408, The Raven) and they continue to be disappointing. There are many actors who could have done a much better job here. It would have been nice to see a Christoph Waltz, Tom Hardy, or a Javier Bardem as Clem. With Cusack, you never really get a sense that he will REALLY pull the trigger. Despite Cusack’s deficiencies with the villain character, Grand Piano still largely works due to Mira’s handling of it. The mounting tension, engaging story, clean cinematography is enough to keep you interested. Satisfying and clever ending that follows up on an tease from earlier. You’ll probably be sitting through the end credits hoping to get some follow-up footage, but you won’t get it (sorry).

Heaven is for Real

Stranger By The Lake