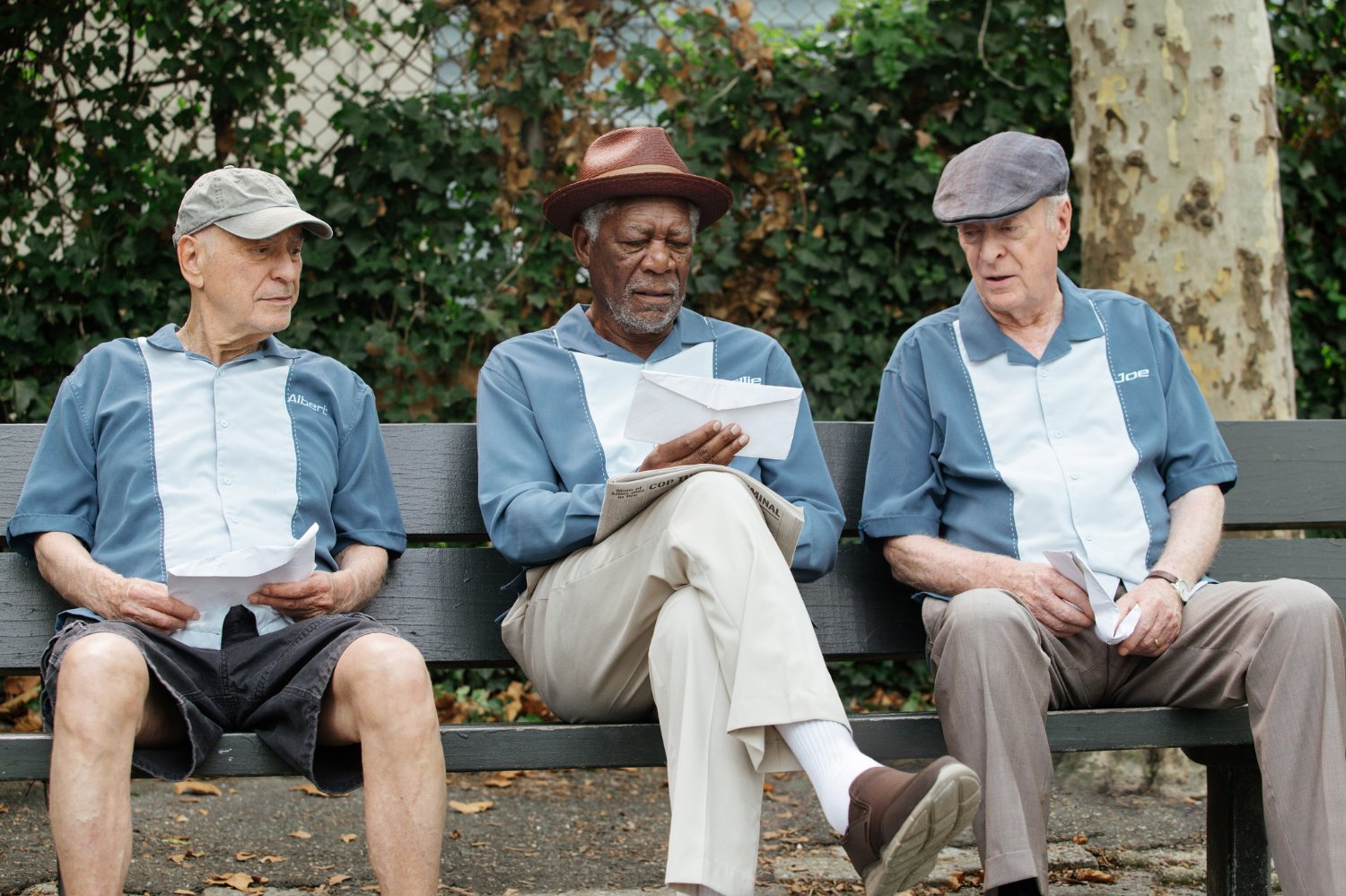 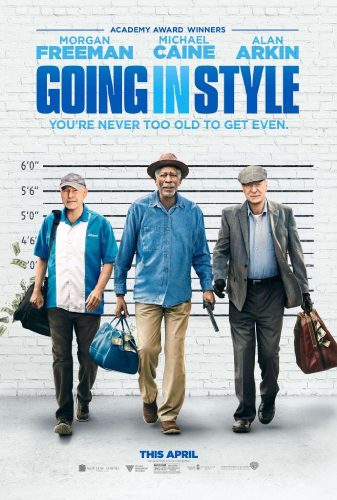 There is something to be said for movies that have no particular ambition due to a level of self-awareness. There is something to be said for swallowing your pride, accepting the reality of the situation, and doing what you can with the given factors. It’s admirable and with such unabashed pride in the face of acceptance there is charm to be found. A different, slightly quirky, break from the norm type charm and this is what Going in Style relies on to let its audience know it is well aware of what it is and that it has no qualms about it. If you don’t have any qualms with the type of entertainment a movie like Going in Style promises to deliver then you likely won’t have any issue with the movie either. Going in Style is exactly what one would expect it to be given it comes from screenwriter Theodore Melfi (St. Vincent, Hidden Figures) and by his pen is an updated version of the 1979 film of the same name that starred George Burns, Art Carney, and Lee Strasberg. That film, which I admittedly haven’t seen, came from director Martin Brest who may or may not have the strangest filmography in the history of directors. The man, who made his big studio feature debut with the original Going in Style at the age of twenty-eight, would go on to direct the likes of such films as Beverly Hills Cop, Midnight Run, and Meet Joe Black among others until he debuted Gigli in 2003 and hasn’t worked since. If you’re old enough you may recognize the guy as Dr. Miller from Fast Times at Ridgemont High, but all of this is neither here nor there (though someone should really look into how one film was so detrimental to an otherwise prosperous career). The point is, what made Going in Style a movie worth re-making seems to have been absent from the consideration of the studio and filmmakers and more was simply an excuse to round up some of our best aging actors, throw them in a film together, and let the chemistry and credibility do the rest of the work. If one has seen the like-minded Last Vegas then you know this actually turns out fairly well and to no surprise Going in Style yields much the same results. A superfluous and completely unnecessary re-make, no doubt, but a frothy enough excursion you don’t take seriously enough to be upset about.

But what of the director of this re-envisioned Going in Style? Well, that would be Zach Braff. The same Braff that made his feature directorial debut with 2004’s Garden State that was lovingly adored by all the millennials who didn’t yet know we had a name and the same Braff who didn’t direct another feature for a decade until his crowd sourced Wish I Was Here made little to no impact in 2014. Braff has seemingly since resigned to a life of studio paychecks making a TV movie in 2015 and now taking the helm of the film that is the subject of this review, neither of which he had any other creative influence on. Braff became known for his everyman quality, his authenticity in his comedy and persona as honed on Scrubs and one would be forgiven if they expect to find as much in his latest effort, but there is nothing of the sort here. Going in Style is directed and executed in as vanilla a fashion as one could imagine. This doesn’t necessarily mean anything is wrong with the film-there is a distinct lack of Viagra jokes-but rather that there is nothing to assist in helping the film stand apart from those that are of a similar nature. The only thing striking about the picture is that it was somehow able to recruit such a strong cast and in the performances and rapport our three leads give and demonstrate we have something to distract us from how plain this thing is otherwise. Who exactly has Braff and Warner Bros. rounded up for this re-make though? Well, that would be Sir Michael Caine, the man with the golden voice Morgan Freeman, and everyone’s favorite curmudgeon Alan Arkin. Having these three men together in a room to spitball ideas about how to replace their pension that has suddenly been taken out from under them is enough to garner a few laughs if not incite some social commentary on what it’s like to grow old in the United States and how well we take care of our elderly, but the film couldn’t really be bothered to explore as much. Instead, the whole idea of putting these three iconic actors in different settings and relying largely on fish out of water humor to get laughs is about where the film settles on being content with itself. Ultimately, neither the movie nor its characters feel as sly as they need to.

Going in Style begins by introducing us to Joe (Caine) as he walks into a bank and is told his house, which he’s recently bought so that his daughter (Maria Dizzia) and granddaughter (Joey King) may move in with him, is under foreclosure because he hasn’t made so many payments. This is due to the fact the bank tripled Joe’s mortgage under a technicality that Joe was told was very unlikely when he made the purchase. In the middle of this discussion with a very smug teller (played hilariously by Josh Pais) the bank in which Joe is sitting comes to be robbed by three masked gunmen. Rather than being frightened, Joe watches in a kind of admiration as the three men perfectly orchestrate a heist and time it so that they are in and out before the authorities are able to arrive. As a star witness to the events, Caine reports his account of the heist to Detective Hamer (Matt Dillon), but can’t seem to shake the feeling of how impressive the whole experience was. This of course leads into the unfortunate circumstances that are the inciting incident of the film where Joe, Freeman’s Willie, and Arkin’s Albert are informed the steel company they dedicated thirty plus years of their lives to is packing up and moving their manufacturing base out of the U.S. making them legally free of paying pensions or other retirement funds to U.S. based workers. Of course, as Willie and Albert already share an apartment together in Brooklyn with Joe living across the street and worried about how he’s going to pay the bills the three of them know they have to do something and do it fast. As Joe is inspired by what he saw in the bank at the beginning of the film he proposes the three of them do the same-only taking what the company owes them. Willie sees no other way, but Albert is sternly against it. Of course, they too have their reasons for feeling such ways; Willie has a daughter and granddaughter of his own that he doesn’t see often as he can’t afford to travel and Albert has recently engaged in a relationship with Annie (Ann-Margaret) that he doesn’t care to disrupt with potential jail time. Of course, as this is a movie we know the trio will ultimately decide to take matters into their own hands and do so by reaching out to Joe’s loser son-in-law (Peter Serafinowicz) who refers them to a colleague named Jesus (John Ortiz) that might actually help them pull off the seemingly impossible.

What all of that tells you, the reader and potential viewer, is that there is plenty going on here to distract from the fact that there isn’t much below the surface. Again, this is fine-not everything has to be Shakespeare or Kubrick, but while Going in Style more or less adheres to the mantra of, “what you see is what you get,” that doesn’t mean it necessarily had to. There is prime real estate for the film to both be the light and funny piece of Sunday afternoon entertainment that it is while at the same time delivering a clever account of what the elderly are having to think about and deal with in the years they should be able to be relaxing and getting the most out of their existence given the fact that time is limited is very much at the forefront of their minds. Of course, this version of Going in Style was never going to have it in its heart to be dark or even close to realistic about such issues, but through the way in which it was executed it might have at least had a more specific point of view. A more firm stance on what it was standing up for, if you will. I was at least hoping at one point or another (especially when Christopher Lloyd’s character would show up spontaneously) that the three leads might at least throw out a few lines concerning their own mortality and how happy/unhappy they were with what their life had amounted to, but nothing of the sort ever comes to pass. Rather, Braff and Melfi have together crafted a film without any of the sincere bitterness its characters are feeling, but more one in which the consequences never feel real and we, the audience, always trust things will turn out for the best no matter how big of a mess Joe, Willie, and Albert get themselves into. There isn’t much more to be said about a film that prides itself on skirting over the heavy stuff in favor of being that pure vanilla flavor in all of its ordinary glory. Of course, for audiences this means it demands less from our brains which isn’t always a bad thing, but given we get so many comedies like this a year it’s a question of how conditioned have we become to turning off our brains and not demanding more from our entertainment? This isn’t an issue to squarely be brought up with Going in Style, but it’s the kind of stuff Going in Style makes me consider due simply to the fact it may be enjoyable, but it’s only intermittently engaging.