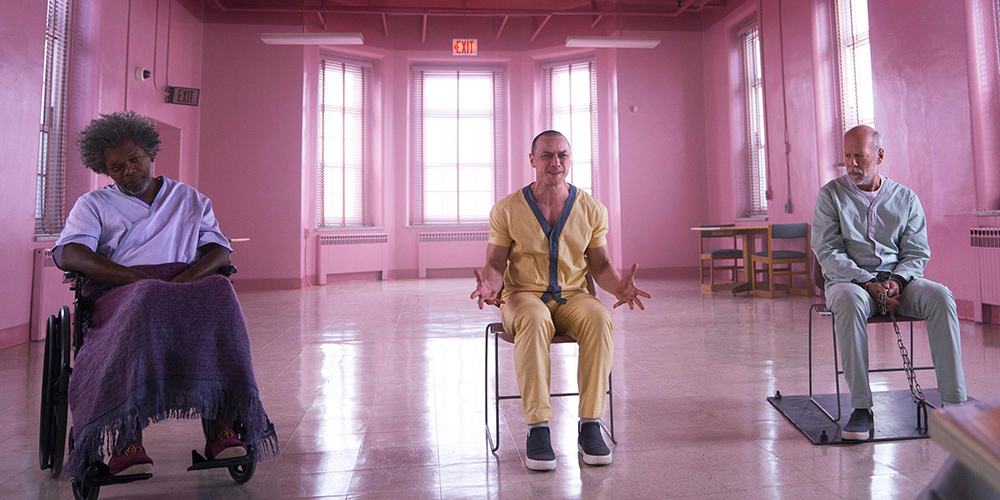 Remember when M. Night Shyamalan was set to become one of the greats? Depending on your age this might actually be too far back for you to have consciously experienced with an adult mind, but it’s genuinely true. Once upon a time, or in the nineteen-nineties, Shyamalan burst onto the scene with one of the highest profile debuts the world had ever known with The Sixth Sense. Adulation was poured upon him, comparisons were made to Hitchcock, and the film entered the pop culture lexicon in which it remains to this day. It was such a smash – both with critics and audiences – that surely it was all downhill from here. And it was, but only minorly.

A year later, Unbreakable arrived to a decidedly more mixed response. Combining the same intelligence and auteur-driven prowess as its predecessor, it smacked largely of being before its time. A deconstruction of the superhero genre at a time before that genre had even begun to truly take root. Think about it: back in 2000, what really comprised the superhero genre in the eyes of the mainstream filmgoing public? Pretty much just the Superman and Batman movies, with a sprinkling of that newfangled X-Men thing and a dash of that Wesley Snipes vampire movie some of the kids down the arcade were harping on about.

The idea then that Unbreakable might finally land itself the director’s oft-trumpeted trilogy became something of a “wish in one hand, s**t in the other” scenario in the years since, but then something curious happened. In 2016, Shyamalan – then hot on the success of his woeful found footage horror flick, The Visit – released Split, a film constructed of a deleted story element from his original Unbreakable script. The film was a low-key smash, and immediately generated buzz based almost entirely on its closing scene – the result of a gentleman’s agreement with Disney – that saw the return of Bruce Willis’ Unbreakable antagonist and the establishment that the events you’d just seen unfold were not only set in that movie’s world, but were the basis for a sequel to come that would combine both. Shyamalan finally had his trilogy, and, since he’d slipped part two past you without you noticing, the stage was set for the final – and biggest – chapter yet. 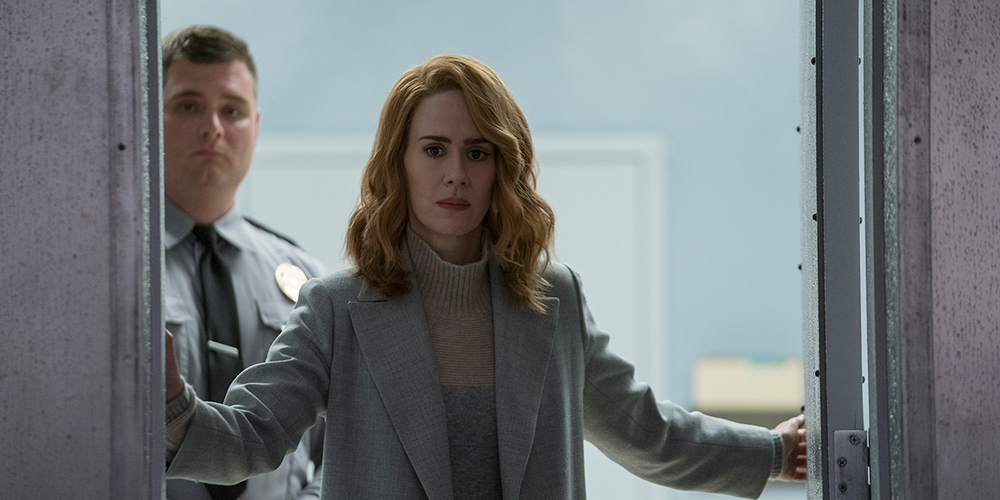 That Glass is one of the dullest tentpole flicks in some time comes as something of a crushing blow. As rags to riches stories for film franchises go, it could have been one of the biggies. Reuniting nearly every principle cast member of both Unbreakable and Split and setting them about deconstructing the superhero genre in a time when the superhero genre finally means something tangible to multiplex audiences seemed an almost guaranteed recipe for brilliance. Instead however, Glass is a film that unites that principle cast in a car park to yell about story arcs and comic conventions; and what could have been The Godfather for superhero flicks feels more like having your car blocked in at MCM.

Set what appears to be weeks after that Split-closing stinger, Bruce Willis’ David Dunn is now The Overseer – an invulnerable vigilante protecting the citizens of Philadelphia with the aid of his now adult son. On the trail of a group of kidnapped cheerleaders, Dunn is brought face-to-face with James McAvoy’s Hoard, inciting a bone-crunching building-smashing confrontation that sees both locked up and placed under the care of Sarah Paulson’s creepily sanitised psychologist, Dr. Staple, and placed on the path toward ridding them of their heroes and villains delusions. But the inclusion of the long-incarcerated Mr. Glass – a returning Samuel L. Jackson – soon brings about an element Staple could never have foreseen: that maybe they’re real. There’s also a new state-of-the-art skyscraper set to be unveiled in the city – random information that drops every ten or so minutes, and surely couldn’t be in any way relevant.

Actually, relevance is something Glass in no way strives for. Much like the Entourage movie a few years back attempted to be a movie set in modern Hollywood without mentioning that superheroes had forever changed the industry, Glass is much the same. Yet while, in Entourage’s case, that was likely more for a lack of insight than anything else, Shyamalan’s work here seems almost afraid. It’s understandable that it might be too, as this crisp hundred and twenty-nine minute clusterf**k of a superhero drama spends its entire first half playing the shell game with comic lore undertones – afforded the chance to do so largely on the strength of its inciting instalment – only to give up entirely on subtlety and convert those undertones to full blown overtones with an unmistakable sense of discomfort that leaves it feeling like the world’s longest Heroes fan film.

As was the case in Split, James McAvoy’s having a grand old time, and why shouldn’t he? Nobody else involved in Glass is, least of all Willis – the first psychiatric patient in history to seem equally sedated before and after being medicated, while Samuel L. Jackson brings the funk to the role, but is denied the rhythm by a script that sees him serving largely as the franchise’s Danny Madigan – the annoying child character from Last Action Hero whose verbalised knowledge of tropes would quickly grow annoying to the extent of provoking genuine aggression in a real world setting. 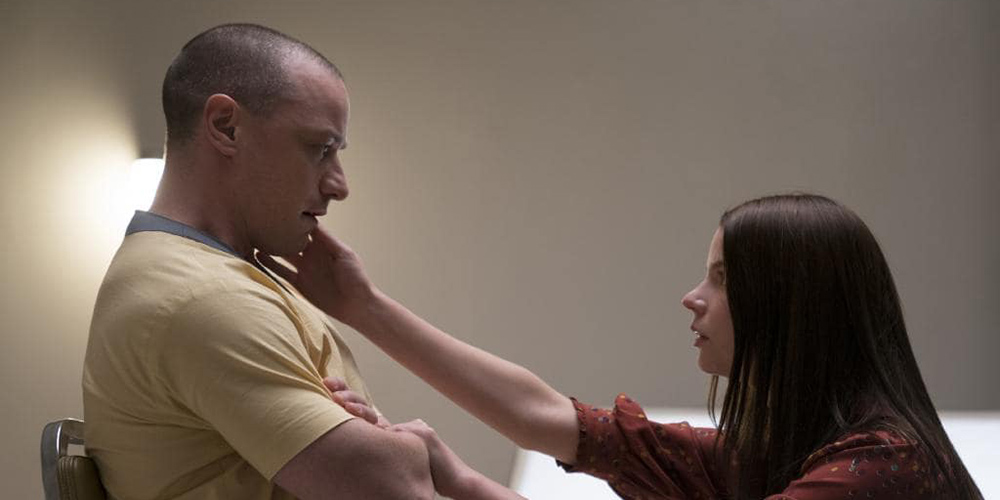 The opening ten minutes, in which Shyamalan attempts to balance the two respective tones, plays nimbly enough. Once the set-up’s in play, however, all bets are off, and the director of The Last Airbender and The Happening is revealed to be the true villain you needed to fear all along. There are countless people in the world who’ll go to bat for Shyamalan’s work, who’ll defend him as merely misunderstood and harshly dealt by the filmgoing public. People who have presumably either never sat through or forgotten seeing After Earth – a movie that plays like Deliverance at the side of this greyscale network-TV level hodgepodge. The director has referred to his work here in pre-release interviews as “the first truly grounded superhero movie”. In actuality, he’s produced a work so monotonous and uninteresting, it’s a superhero movie he’s run into the ground.

While Unbreakable was ahead of its time, Glass is woefully behind the times. Like a movie adaptation of that staple (sic) episode every genre pulls out in which the superpowered antagonist is convinced their abilities and the events of the show to date are merely delusion, Glass feels entirely worn, outdated, and unengaging – like a dad joke without the fun. Paulson’s doing her best to give it credibility, as is her default setting, but, like McAvoy, there’s no life to be found elsewhere in front of the camera, and there’s damn sure none behind it either. Hell, even Shyamalan’s obligatory cameo – hilariously parlayed here to serve as both his Unbreakable and Split cameo characters – feels uninterested and elsewhere. As if the director himself simply can’t be bothered to be present. Ten minutes into an exercise that lasts more than two hours.

Defend Shyamalan’s work all you like – I will up to and including *maybe* The Village – but the end result of Glass is a director whose best days now sit as barely a blip in the rear view mirror, parked in the midst of his cast shouting story conventions at one another with no discernible interest himself in being in any way physically or mentally present. A mindset you can’t help but share as Jackson wheels from one scene to the next prefixing each of his own actions with a half-assed witticism about how those actions would play in comics. In comics, intrigue is key, excitement is paramount. In Glass, boredom is the status quo, disinterest the consequence.