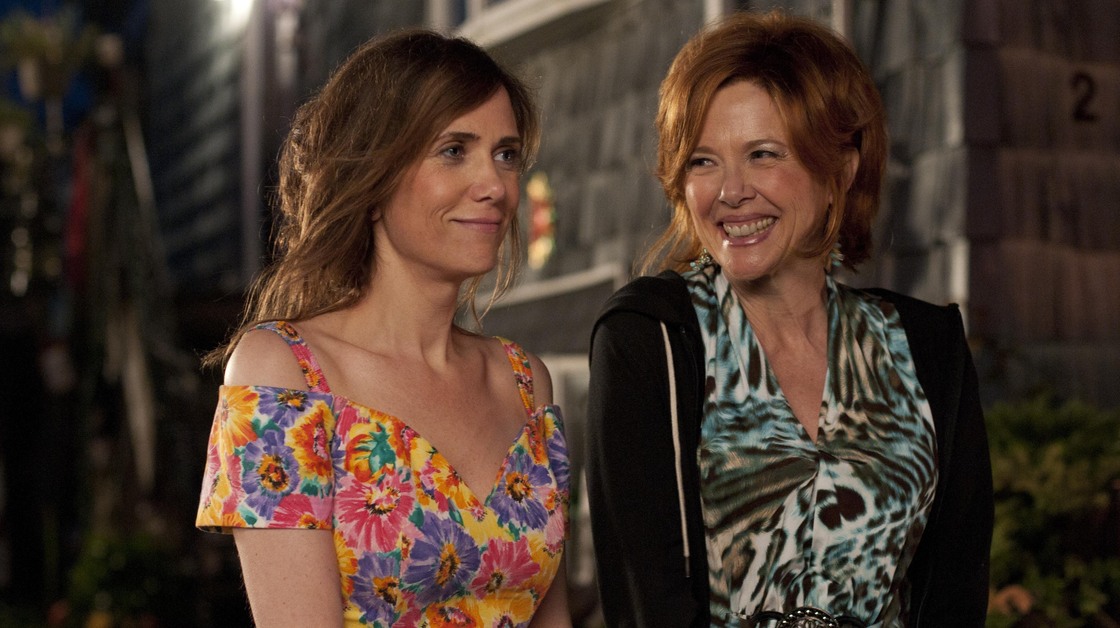 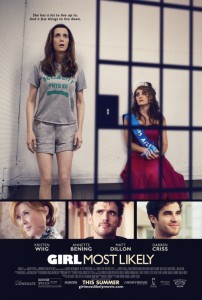 What happens when a movie doesn’t center around its most interesting character? That is only one of the issues facing the latest Kristen Wiig film, Girl Most Likely. I’m not sure what I expected from Wiig after she officially “made it” with Bridesmaids a few years ago, but she certainly hasn’t attempted to capitalize on her heightened status as much as co-star Melissa McCarthy. No, I’m not sure what I expected of her, but I know it was more than this. Before that leading role in Bridesmaids it seemed Wiig was everywhere in small, supporting parts (Extract, Adventureland, Whip It, MacGruber, Date Night, Paul) but since she has done nothing in the way of mainstream films besides lending her voice to animated work (most notably Despicable Me 2) while her only major film roles have been the one under review here and the favor that was Friends with Kids. All of this is to say that while Girl Most Likely is a passable film with a cast too good for its material there was a level of expectation for Wiig’s career and in many ways this is the kind of film that begins to deflate those expectations. There is still time as plenty of people won’t discover this little film until it makes its way quietly onto home video in a few months and Wiig has several projects lined up including the Anchorman sequel and the Ben Stiller-directed re-make of The Secret Life of Walter Mitty both of which come out in December and will do nothing but boost her star, but these will again be supporting roles and people are anxious to see her take the lead again, just not like this. We want to see her head up a mainstream comedy with mass appeal that still allows her brand of humor to seep in and we want to see her play a different kind of character. The Imogene of Girl Most Likely is so much like the Annie of Bridesmaids we begin to wonder if this is what might have happened in an alternate universe. Wiig is known for being able to play a variety of characters, I just hope she shows that on the big screen soon.

Originally named after its protagonist, Girl Most Likely introduces us to Imogene (Wiig) on the night she loses her fancy New York apartment and her uppity boyfriend which pushes her to fake her own suicide in hopes she might win back his attention. When this plan fails and lands her in an overcrowded hospital the doctors force Imogene into the care of her mother, Zelda (Annette Benning), a compulsive gambler who heads straight to the casino after picking her sedated daughter up from the hospital. Imogene wakes up in the back seat of her moms car, the windows cracked mind you, and wanders through the parking lot and into the casino wearing little more than her hospital gown. It is a funny moment and it illustrates the best parts of the film. They come in small, very intimate doses that make the movie go down easy while being able to coat the fact that it isn’t really that funny and that for long stretches there isn’t much happening. The crutch of Imogene’s character is that she was once a very promising young playwright who won an award almost ten years before and never came through on the promise she showed and instead ended up becoming a New York socialite. A lady of all play and little work who never really fits in due to her lack of success, her lack of wealth and lack of connections. She hails from Jersey where her mother and brother, Ralph (Christopher Fitzgerald), still live and is intent on never going back. Naturally, this plan is disrupted when her world falls apart and she is forced back into the lives of Zelda and Ralph along with Zelda’s boyfriend George Bousche (Matt Dillon) and the young Lee (Darren Criss) who Zelda has rented Imogene’s room out to. Imogene is intent on getting back to the city and putting the pieces of her old life back together, but things happen, revelations come to light and old quarrels are patched up as these things usually go.

Coming back to that first line of the review though, I found myself much more interested in the plight of Imogene’s shut-in brother who seems to have some form of autism that could very well be a level of aspergers. When Imogene returns home for the first time in what has likely been that full decade it is clear from the expression on Ralph’s face that he is overjoyed to see her again. Fitzgerald, who hasn’t done much film work, owns the role and lends the movie a sweetness that might have otherwise led it to being nothing more than another story of a hipster chick with too big of aspirations to match the mundane of her day to day life where she finds nothing to push her creative juices forward and nothing to help her avoid the stereotypical men who only care to have her on their arm to build their own reputation. It could have very easily gone that way and I kind of expected that type of film walking in, but once we meet Ralph and we see the relationships between he and his mother develop and then the relationship between he and his sister we come to wish we were able to get to know him a little bit better. I would have loved to see the world from Ralph’s perspective and his attempts to attain the simple things in life that feel so big to him. He is afraid to go anywhere past the boardwalk and completely enjoys his time on the shore while making his obsession with mollusks into somewhat of a profession by opening his own stand along the coast that sells the crabs as pets. As the film goes on and we come to understand Ralph is much smarter and more in tune with what is going on around him than we originally thought he at the same time feels closer while becoming that much more mysterious. Though Wiig is always charming on some level and the rest of cast is doing the best they can with what they have I was never as intrigued by them or their situations as I was with Ralph. He is an endearing presence and brings a level of emotional connectivity and laughter to the film that makes it feel familiar, as if we could better see ourselves in these characters positions and hope that we could approach their issues with the optimism Ralph does.

What this all comes to mean is that ultimately there is a better movie in here somewhere, but the one that we got isn’t half bad. It has amusing moments and some genuine humor derived from the situation and the characters that doesn’t rely on gross out gags. Some of it is fairly dark with a tendency to lean towards the quirky, but besides Fitzgerald we have Dillon doing some of his best comedic work since There’s Something About Mary with a payoff that will garner at least one belly laugh and Benning playing up her jersey shore-type persona only to have deeper layers revealed as the film reaches its conclusion. I haven’t watched an episode of Glee and hadn’t heard much about Criss prior to seeing him here, but he brings a strong charisma to an underwritten part. As the random guy lodging in her mothers house Imogene has no reason not to approach Lee with a bit of awkwardness but the scenes Criss and Wiig do share together are full of strong chemistry that has us rooting for each of them to get where they want to go. Plus, in a surprising turn the Backstreet Boys “Everybody,” gets another boost here after being used to great comic effect earlier this summer in This is the End. This will certainly put Criss on the radar for bigger roles in bigger movies and what he was able to pull off in subtle amounts here could certainly be used in other films that give him stronger material to work with. Girl Most Likely isn’t a bad film, it is certainly a pleasant enough way to spend an hour and a half, but the message it is relaying is something we’ve heard countless times before and has been done to better effect. At the end of the day though I came to like the characters at play much more than I anticipated and genuinely felt a feeling of affection toward the movie that, despite me wishing it had become a better final product, had me embracing it for what it was. This won’t make anyone’s top ten lists (it may make some worst lists in all reality) but this is a film that tried and though it may not get the perfect score its heart is in the right place and sometimes that counts for a lot more.