Gambling in films has been around for decades from the early westerns right up to the recent release of Spectre, certainly action films and financial risk go hand in hand. Market gains and stock market movements are also a regular feature of films as the ‘goodies’ battle the ‘baddies’. Let’s focus on which films have glamourised gambling and which have criticised the practice – there is a real spectrum out there. ‘Ocean’s Eleven’ is a mass market film but was also well received critically. It obviously performed well at the box office as it featured Matt Damon, George Clooney, Brad Pitt and Julia Roberts. Gambling generally is portrayed quite well within this series of films as the co-stars are quite glamourous and adventurous – they win their battle which also provides gloss to the context of gambling. 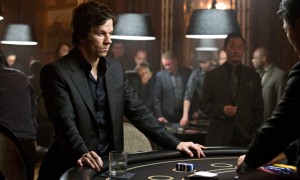 Mark Wahlberg in ‘The Gambler’

The iconic British film ‘Lock, Stock and Two Smoking Barrels’, this film takes an authentic view of how friends together can triumph over adversity. The film is well written and has a constant comedic edge. Several scenes (namely in the boxing ring) really portray the pressure cook atmosphere when there are high stakes within betting. However the skill and deceptive skill required in these scenes are not realistic for the common man in the street who enjoys the odd flutter, which in the vast majority of cases results in minimal losses and gains. ‘The Hangover’ is a film which focuses on a group of friends who have to use gambling as part vehicle to escape an ever evolving snowball plot – once again gambling is seen as a reasonably light hearted pursuit.

So what about actual gambling firms that are operating in 2015 and are they mindful of the impact of films? As we see more online casinos is this depicted within mainstream film? At the moment this online movement has yet to translate to the silver screen despite an established industry base. A company such as Compare Free Casino would welcome a positive depiction of online gaming within films as it is a loved hobby and interest for a lot of people. The vast majority of paying customers and those watching films are knowledgeable and understand the reality of the experience and it’s great that there is independent help and advice out there. The Gambler (released in 2014) theatrically shows the downside of the gambling – the genuine film fan will actively look at films which put down and promote gambling and see it from their unique viewpoint. As gambling becomes more commonplace within films it will probably become depicted as an everyday activity rather than the ‘make or break’ scenario that often presents itself currently.