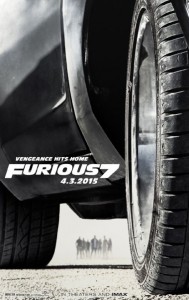 If there is one thing that’s certain, it’s that the Fast and Furious movies know their target audience. If you love the series, you’ll always love it, if you hate it, nothing will convince you to see the films; there are few fence dwellers here. Needless to say, if you are a fan, you will love Furious 7. Bursting at the seams with ridiculous action sequences, supercars that will excite petrol heads of all ages and plenty eye candy for guys and girls alike, Furious 7 has everything fans want to see.

Deckard Shaw (Jason Statham) is out to avenge his brother in Furious 7 and has crossed the pond to wreak havoc on Dom’s family. To make things doubly difficult for Dominic Toretto (Vin Diesel), Shaw has some formidable company in the form of Somalian terrorist, Jakarde (Djimon Hounsou) who has agreed to join forces with Shaw by the mantra ‘the enemy of my enemy is my friend’. Naturally, if you threaten one of Dom’s crew, you threaten them all, so as furious as ever, they come together to settle the score once and for all.

In the midst of the mayhem, a heartfelt and moving tribute to the late Paul Walker is the highlight of this installment, as Walker reprises his role as Brian O’Conner for the final time. Brian, slowly but not so surely coming to terms with family life, has a lot to consider before he agrees to this new mission. Despite his longing for the thrills of his escapades with Dom,Brian knows that family is paramount. This is the message that forms the baseline in Furious 7; family is above all else, whether through blood or loyalty, it is the people in your life who matter more than any futile pursuance.

From F-Types, Astons and R8’s to Wranglers, Challengers and Camaros, the cars are the stars in Furious 7. And, if you think cars can’t fly, think again, because Dom and his crew always find a way to pull off the impossible. Yes, the plot only hangs on by a thread, and yes, the stunts are so flagrantly farfetched that they completely defy physics, but that is what the fans love, and boy does Furious 7 deliver. Requiring some serious willing suspension of disbelief (as serious as the suspension on some of those cars),Furious 7 knows what it is, and doesn’t try to be anything other than a supercharged thrill ride.