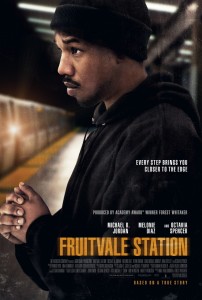 Fruitvale Station is a difficult movie to deal with. It is a very moving picture that doesn’t attempt to manipulate its audience or contrary to what you may believe going in, have an agenda more than telling the basic story of what happened on those fateful early hours of New Years Day 2009. Since its premiere at this years Cannes Film Festival there has been nothing but positive buzz swirling around the film and typically I’m speculative of these films that seem to garner unanimous praise based simply on the idea that if I look too much into the critical reception I will expect too much from the film rather than being able to take it in for what it is and what it was meant to be. I mention this because despite the fact I tried to avoid chatter around the film it is pretty impossible if you follow any film site, but also because none of that hindered my viewing experience. There is something very pure about the journey this film takes you on despite its content highlighting the downfalls and tragedy of a young black man in suburban America. Director Ryan Coogler makes his feature film debut with this simplistic, no frills approach to a story that needs nothing extra to make it as emotionally charged as the simple facts of the story leave us feeling. I go to the movies to see interesting stories, meet interesting characters and if I’m lucky become emotionally invested in the conflicts these characters come into contact with. We root for our protagonists and we hope they can conquer the challenges the antagonists present them with whether that be a supernatural force, an opposing government, or something more personal like a mental illness. What makes Fruitvale Station the exception to the rule is not that it is “based on a true story” but that it doesn’t follow the conventional arc of a movie in that we know what we’re getting, we know there is no happy ending, and that even though we can’t escape the heartbreak of the events this movie sheds light on there is a profound meaning to come from the way Koogler and his cast convey a story that might never be known to those outside the community it’s documenting. There are no excuses for how wrong things ended for Oscar Grant, but if its any testament to his legacy this film will serve to both make people aware and inspire others looking to make a change.

In the early morning hours of January 1, 2009 22 year-old Oscar Grant (Michael B. Jordan) along with his girlfriend Sophina (Melonie Diaz) and a group of friends were returning from a New Year’s Eve celebration in Frisco after watching the fireworks. At the suggestion of his mother, Wanda (Octavia Spencer) Oscar and his friends take the train and on their way home get into an altercation on that results in BART (Bay Area Rapid Transit) police officers being called to the scene at the Fruitvale Station where the train came to a halt. Once on the scene Grant and a few of his friends are detained and taken off the train. There are heated interactions between the cops and Oscar’s group of friends. There are millions of questions that pop up as you watch it unfold. Why did they only take one group off the train and not both parties involved in the fight? Why do they immediately detain the most obvious suspects without later questioning them to find out the source of the issue? It is a frustrating mess that was handled beyond poorly. There are naturally going to be cries of racism and stereotypical assumptions informing poor decisions and to a degree that is correct. Coogler doesn’t make his film as commentary on these points though and he isn’t trying to send messages through subtexts or metaphors but is taking the actions made by the people involved at face value. There is no escaping the facts that a young black man dressed the way Oscar was and surrounded by a group of friends who look similar to him are going to be pulled off and questioned first based on those details alone. In the middle of all of this though we see this character, this human being we have come to know over the past hour and someone who is genuinely trying to turn his life around once more attempt to do what is right and calm everyone down while hoping to approach the police in a way that things might be resolved peacefully. Instead, Oscar ends up being restrained, his face pressed hard against the ground while Officer Caruso (Kevin Durand) rests his knee on Oscar’s skull. Officer Johannes Mehserle portrayed here as Officer Ingram by Chad Michael Murray pulled his gun and shot Oscar once in the back causing a wound that would result in his death later that morning.

As all of this is going on it is being caught on video from several cell phone cameras and the film opens with one of those videos. Not only is it incredibly disturbing to see play out, but it brings an unnerving amount of reality to the experience. Playing off this moment Coogler takes us back and shows us the single day leading up to the event described above. It is in these ordinary moments, this common existence that we find out so much about who Oscar was and who he was trying to be. Fresh out of a stint in prison it is immediately made clear Oscar has no intention of returning and is intent on stepping back from each situation where he might normally let his temper get the best of him. He seems to have come to an understanding that the tough prison guy act is only going to get him so far and that he needs to approach things with a more collective attitude. We see this throughout his day as he tries to improve himself if not for anything else, but for the love of his daughter with Sophina, Tatiana (Ariana Neal).

What Oscar does throughout the day are things unspectacular in the common sense of the word. He takes Sophina to work, he drops Tatiana off at daycare, he goes up to the grocery store where he worked to try and get his job back while at the same time buying a few things for his mothers birthday celebration that night. He talks to his sister who has to work late, but asks him to pick up a card for her to give to their mom. He hasn’t told Sophina he lost his job and he’s on the verge of selling drugs again just to make ends meet. It is the way in which he goes about these simple chores and the decisions he makes regarding these choices that peel back the layers of who Oscar is. Aiding in this are the women in his life. While it is clear Oscar loves his daughter unconditionally the way both his mother and Sophina react towards him tell us as much about where Oscar has been as his actions throughout New Years Eve tell us where he might have been going. They are cautious of him, weary that he might relapse at any moment and solid reasoning is given to us via a flashback that offers the most moving scene in the film. Coogler doesn’t distort facts to make Oscar a saint in order to make the tragedy of what happened feel even more unjust, that isn’t necessary. Oscar does sell drugs, he does lie to Sophina and he has cheated on her. He does still find it hard to step back when someone steps to him, but he was making an attempt. That he was robbed of a fair chance to see that through is the real crime.

This story alone is worth telling no matter what tools might be used to tell it. Sometimes, in movies, all you need is an incredible story to leave an impression. If there is no skill behind the camera, no deeper thought in the shot selection or in the performances it won’t matter as much because the narrative is so refreshing or moving that it is hard to deny the intrigue or the hook it has on you. Fortunately, that is not the case with Fruitvale Station despite it being one of those stories that requires little in the way of extrinsic factors that might otherwise improve a more common tale. Anchoring the film is the gritty, authentic performance of Jordan. You might recognize Jordan from smaller roles in plenty of films or from Friday Night Lights, but this turn will no doubt make him a star. He plays Oscar with an understated charm that is compelling to see when paired with what he’s been through and the obstacles he faces. In the aforementioned flashback scene he demonstrates the way in which a person can go from being devastated, heartbroken and vulnerable to that of a hardened inmate in the blink of an eye. It perfectly exemplifies the constant contradictions going on in his world and you can see on Jordan’s face the pain of having to hear what his mother is saying while dealing with keeping up his persona and not letting anyone else through the cracks that are beginning to form in his exterior. Luckily this also provides the motivation needed for Oscar to get his act together, but to watch Jordan’s performance convey that in limited dialogue is the realization you are watching something great.

Octavia Spencer has a limited presence here, but as I said before, her role and influence is critical to the way in which the film shapes who its protagonist is. In what screen time she does have Spencer shows real depth in some of the more tragic aspects of how strong she has to be for everyone around her despite the fact she is likely hurting the worst. Even more than Spencer though, Melonie Diaz is phenomenal. There are almost no words to express how perfectly she captures the mood, the emotions, and the love she has for Oscar except to simply stare into her expressions and listen to her vocal inflections that convey perfectly that renewed sense of hope she has for their life together. These same aspects come into play when she is cut off from the action in the climax of the film and has no idea what is taking place on the platform. She is bewildered, worried and the sound of the single gun shot conjures up a million different images that she only hopes aren’t true. It is in a single moment she feels her world come crashing down and Diaz is able to encapsulate all the pain and anger felt by Sophina in nothing more than her body language. It is devastating. It clarifies how fragile life is and brings light to just how much his absence will forever change the course of her life. These performances along with the lean direction from Coogler help breathe inspiring life into a story of unnecessary death.