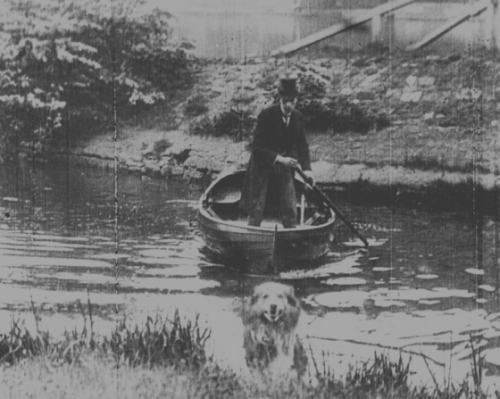 Beko’s 2021 Pet Habits survey has revealed that dogs are the most owned pets in UK households, with over 9 million puppers across the country receiving daily scritches, boops, and cuddles from besotted owners. Further though, the survey also found that the most popular breeds are the trusty Labrador and the beautiful Border Collie. Now, as a huge huge fan of silent cinema and pets on film, this information has given me a chance to shine a light on cinema’s original good boy, Blair the Collie.

Owned by British film director and cinematic pioneer Cecil Hepworth, Blair – whose stage name Rover made an otherwise relatively unheard of pet name a national institution – made his debut proper in the 1905 short film Rescued by Rover. Starring alongside his owner Cecil, as well as Cecil’s wife and infant child, Blair’s screen presence in a mere six and a half minutes can’t be underestimated. Check out the short below and you’ll see what I mean;

While shedding, statistically speaking, is our four-legged friends’ number one messy trait, here we get to watch Blair challenge that finding as our hero Rover. Over the film’s short runtime, we get to see Rover wade across a river twice and majestically send water flying everywhere, making an almighty but very worthy mess in the process. In fact, watching Blair make a splash – very literally – in his big screen debut as he sets about rescuing his master’s baby from questionably stereotyped gypsy robbers is a solid reminder (as if any were needed) that our pets’ love and loyalty is more than worth the mess they make.

Rescued by Rover would be a must-see curiosity for its status as the first dog film even if it wasn’t especially good, but as revisiting it today shows us, it stands up as the real deal even way back in cinema’s infancy. Shot in a linear fashion that sees each scene build on the last towards an emotionally captivating finale – something scarcely seen in cinema to that point – Hepworth’s film has a lot of heart and technical merit. Blair never misses a cue, and from pawing down doors to swimming across rivers to lovingly licking his human’s face, the gorgeous Collie with an instantly recognisable and utterly unforgettable diamond-shaped forehead marking becomes a star before our very eyes.

Such was the success of Rescued by Rover that the film had to be shot-for-shot remade twice after original negatives were worn out from such high demand for screenings. Not only was Blair’s original star vehicle reshot twice though, its popularity led to the release of a 1908 sequel, much more bluntly named The Dog Outwits the Kidnapper, which you can, and absolutely should, watch here. Sadly, though we know Blair had many more starring roles in his career thanks to the prolific output of his owner’s studio, when Cecil Hepworth was forced to sell Hepworth Productions in 1924, the new owners melted down the majority of the surviving negatives in their vaults to retrieve the silver content.

Though Blair’s contemporaries such as Jean the Vitagraph Dog,  Keystone Teddy, Brownie the Wonder Dog, and Rin Tin Tin would go on to become even bigger canine superstars in the years that followed, Hepworth Productions’ beautiful Collie will forever remain the first – and best – good boy in film. At least he is to me.