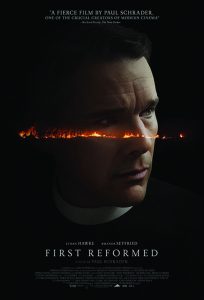 First Reformed has been dubbed as Paul Schrader’s triumphant return to cinema. Widely praised by critics and audiences, it finally hits UK cinemas. What is First Reformed all about you ask? Reverend Ernst Toller (Ethan Hawke) is a solitary parish priest at a small church in upstate New York. Now more of a tourist attraction catering to a dwindling congregation, it has long been eclipsed by its nearby parent church. When a pregnant parishioner (Amanda Seyfried) asks Reverend Toller to counsel her husband, Toller is plunged into his own tormented past and finds himself questioning his own future and where redemption might lie. With the pressure on him beginning to grow, he must do everything he can to stop events spiralling out of control.

Alienation, social decay makes First Reformed one of the most powerful self portraits in cinema. First Reformed tackles current event topics like the environment, organised religion, politics, and alcoholism as a backdrop for Reverend Toller’s  journey through despair. Hawke’s Toller establishes the key theme early in the film: we’re told that we must hold onto both despair and hope simultaneously. Toller’s efforts to live this self-contradicting life, leads him down a path of madness.We discover that existential crises and sincere Christianity make quite the self destructive couple. Toller finds he must reject the shiny glossy presentation of modern contemporary Christianity, and discover his own self belief and re-build his faith within himself. The careful logic of it draws us in; it’s difficult to see where Toller and society goes wrong.

Paul Scharder’s visuals are utterly striking, each shot is rich with balance, depth and artful symmetry; despite the fact that the film is presented in an unusual aspect ratio of 1.37: 1, it pulls its viewers in with nonstop beautiful photography, mostly high-contrast shots with a muted colour palette.The story is spiritual as you would expect but it’s surprisingly political. The pace of the film is steady and switches seamlessly between snapshots and long takes. The scoring slowly builds its ominous tone, every element of First Reformed is built with intention that serves its sobering themes.

Ethan Hawke has delivered the performance of his career as Toller. This performance is truly next-level from him, and I cannot describe enough to you about how captivating it is to watch Hawke. He is spectacular in this, and an early front runner for award season. First Reformed is quietly intense, disturbingly real with a memorable ending. Paul Schrader carefully tackles controversial topics, especially with handling the concept of Christianity. The movie is neither preachy or anti-Christian in its delivery, but rather shows religion for what it is: a reasonable release for sadness and guilt, but also a burden. First Reformed is without a doubt one of 2018’s finest films.