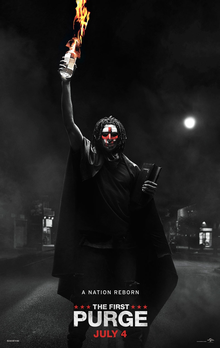 The guilty pleasure franchise that keeps sticking it to the man is back. The First Purge is the prequel that fans of the series have been waiting for. James DeMonaco’s series has provided political and social commentary throughout the Purge series, but how did it all begin? The plot follows Nya (Lex Scott Davis) and her younger brother Isaiah (Joivan Wade) who are living in a low class complex on Staten Island. Isaiah is involved in drug dealing behind his sister’s back. While the kingpin drug dealer Dmitri (Y’Lan Noel) is trying to help. But when the purge experiment happens in their neighbourhood. Nya holds up in a refuge shelter at a church while her brother wants to find a psychopath that humiliated him. Dmitri tries to stay low and demands his crew to do the same. That they should not acknowledge the idea of killing. When Nya and Isaiah are trying to survive the night. Dmitri and his crew try to help those that are defenceless.

The First Purge portrays a very tense and divided America, the imagery of protesting hits home to most audience viewers.  The First Purge is relevant given the political state of affairs. DeMonaco’s turns Staten Island into a coliseum of death and destruction. The setting makes the series feel realistic, playing on a lot of factors that dominate the human psyche today. That being said the First Purge doesn’t provide anything new to the franchise at all. You would expect more depth to how the NFFA got this experiment through, but it’s very limited in development. The opening of the film gives you all the thin line information you would expect if you are a fan of the franchise, but once this has happened we are in just another Purge film. The formula remains the same as the previous ones, which I as an fan was happy and content with but I wanted a bigger worm on the hook. I wanted to feel angry against the system like I did at the Purge: Anarchy, there was no real shock factor or a twist that I expected.

The pacing of this instalment is slower than the others, largely because there’s the set up of how the Purge began. It does set the tone for the film, we learn about our protagonists and how life is on Staten Island. Once the actual purging begins the film goes full throttle into it’s concluding act. The final half of the film is utterly insane and tense, when you have a brother going against the Ku Klux Klan and Skinheads you know it’s going to be wild. It’s like a mash up on The Raid/Dredd and Die Hard, utterly bonkers and satisfying. Like any of the other Purge films, DeMonaco creates characters we care about, The First Purge follows that trend. Y’lan Noel is the gangster with a heart of gold, you shouldn’t care about him. But the love for his community and the people in his life really drives his charisma. Y’lan Noel doesn’t necessarily have mind melting lines, but his aura for the character gives him the extra push.

Lex Scott Davis is the anti-purge protester in our film. She has a lot of power and sassiness to her. Her history with Y’lan Noel’s character, spirals throughout. Her determination and drive to help and stop the purge is convincing and strong. Marisa Tomei on the other hand, had maybe five lines in the movie and barely did anything. As the architect of the purge, you would expect more. Due to the budgets being so small within the franchise don’t expect Deakins style cinematography. Gerard McMurray uses the darkness to his advantage, with very haunting colourful contact-lenses used by purgers to record the evening. The glow in their eyes really give this old fashioned boogeyman vibe to the film. His jump-scares aren’t necessarily cliché but it’s hard to predict when the next one is coming. He has also choreographed strong action sequences through out that keep the audience entertained. The First Purge is a decent inclusion to the franchise. It could of done with more fleshing out, but the over-all portrayal of modern day America sticks with you throughout. Any Purge fan will have a great time watching this latest instalment.