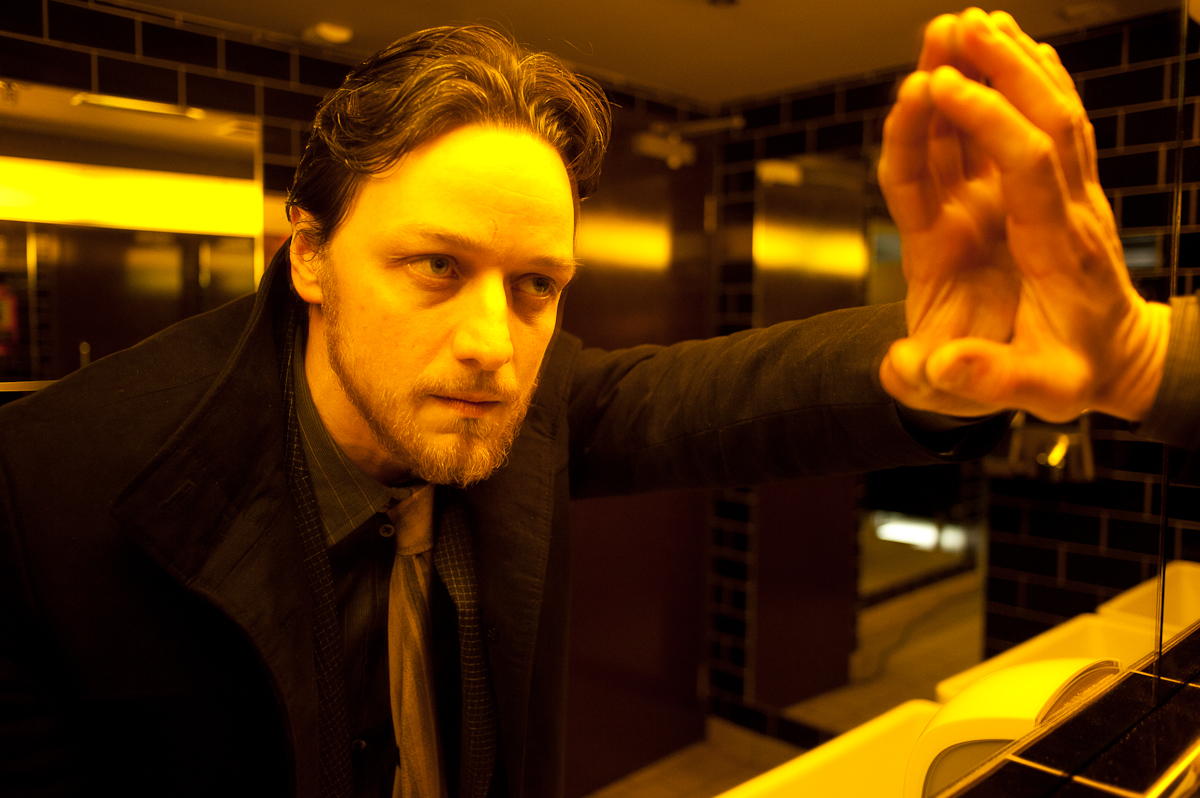 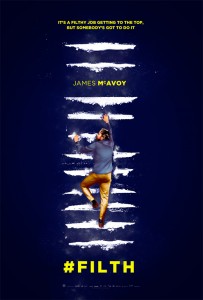 Scripts have been scrunched up and chucked away from previous efforts to adapt Irvine Welsh’s ‘Filth’, all supposedly unbefitting of the desired quality and charm. That was, until writer and director Jon S. Baird pitched up with as much passion for the novel as Danny Boyle and John Hodge had for Trainspotting when they developed it for the big screen nearly twenty years ago. Baird’s interpretation is both loyal to the book yet takes Detective Sergeant Bruce Robertson’s tragic journey in a fresh, but strange new direction. Bruce (James McAvoy) has his beady eye on a promotion in the force and will stop at nothing to put himself in pole position ahead of his competitors. When a Japanese student is killed in one of Edinburgh’s most grimy underpasses, he is placed in charge of the murder investigation, but his deep psychological issues soon begin to scupper his plans as his state of mind spirals wildly out of control.

Handpicking elements from the novel, we are thrust into various subplots straight from the off, from colleague mind games to wicked prank calls to his friend Bladesey’s wife, and the narrative quickly becomes as incoherent as the protagonist’s control obsessed lifestyle. Bruce is a nasty piece of work: a racist, homophobic, alcoholic, drug-addicted, misogynistic mess, yet his story is not without moments of empathy. Welsh’s dark humour is smeared all over the reel, his trademark sick wit is forever present, and the sense of setting is perfect, capturing the festive season in Scotland’s capital very aptly, so much so that you can almost feel the chill as Robbo roams the grey cobbled streets of the Old Town. Most impressive is how Baird handled the complexities of (Bruce’s inner trauma tapeworm, which appears on paper as a bold intrusion streaking through the page, but is cinematically transformed into trippy doctor visits displaying a great understanding of the storytelling tool). This surreal gloss clogs the arteries of the film increasingly throughout, providing a gruelling, yet at times terribly funny, depiction of a man’s physical and mental decline.

With a host of characters squeezed into the running time, some giving no more than brief cameos, the majority of the all star cast weren’t given much of an opportunity to stand out and be noticed. Eddie Marsan again flaunts his admirable versatility as the nervous bumbling Clifford Blades, known affectionately as Brother Blades to Bruce. Shirley Henderson is also a lot of fun as his feisty missus Bunty. Other notable turns come from Jim Broadbent as Dr. Rossi and Jamie Bell as young cocaine snorting police officer Ray Lennox whose character was the key to Welsh’s spin-off Crime. This would also be intriguing to see on the big screen, allowing time for the character to unfold a little more. Despite an acclaimed supporting ensemble, nobody comes close to the show stopping James McAvoy’s in what is the performance of his career in a role he was born to play.

McAvoy epitomises Bruce, encapsulating the sheer weight of the character and all the layers involved. Physically, he is pasty and bloated having gained weight for the role. His unkempt face sports ginger fuzz and his hair is smeared back in as much grease as it takes to deep fry a Mars Bar. In the past, rooting back to his Shameless days, I’ve always found McAvoy likeable but unobtrusive, never in a part that offers that little extra and slaps you across the face. As Bruce Robertson, he slaps you, trips you up and kicks you until you cry, before spitting at you when you’re down. I cannot imagine anyone else doing a better job. Not only is to utterly repulsive, he also manages to achieve an air of mercy and understanding that I believe would be unthinkable from most other actors out there today.

Where Trainspotting gave us a grubby little junkie pocket of the mid-nineties with its iconic soundtrack, and Boyle’s product placement, ‘Filth’ on the other hand is timeless. It is a dirty portrait of a man desperately trying to rebuild his life and put his sinister past behind him. This is ever relevant in any time period, and is a magnificent piece of work, due to the hard hitting script expected of any Irvine Welsh variation, and a remarkable James McAvoy acting masterclass. Outlandish themes aplenty, Baird carries them off with ease, given this is only his second feature film, tackling the tough subject matter with aplomb. Fifteen years after the book was first published, this is story well worth digging up again, but you will be scraping the filth from under your finger nails for a long long time.