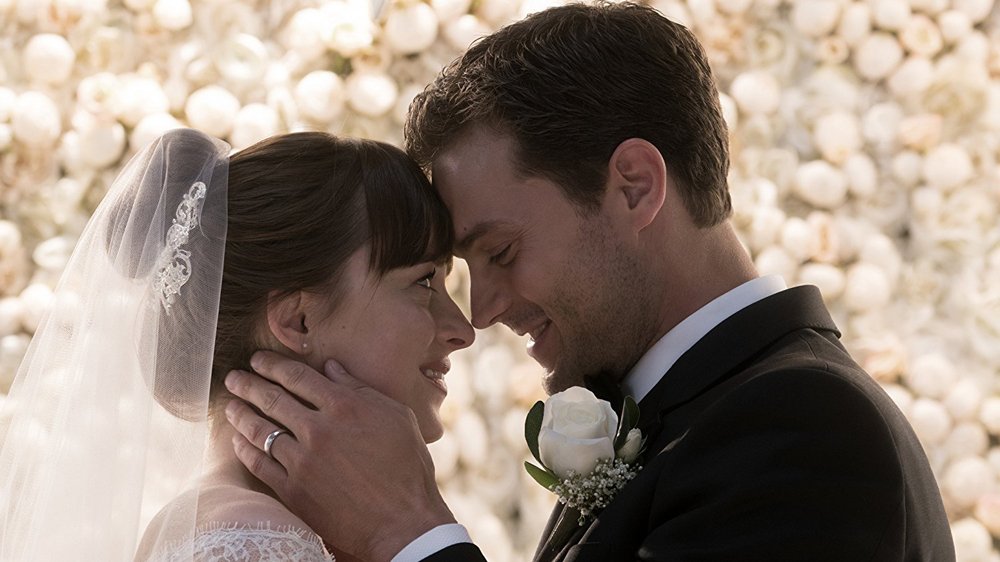 Perhaps it’s fitting that – given its source material’s origins – the now-complete cinematic adaptation of the Fifty Shades saga can best be compared to the Twilight series of films. Putting aside their interchangeable lead characters and certain behavioural ticks, where they best stack up is in having a first instalment with just enough cinematic heft behind the camera to make a go of it, only to instead settle for churning out cinema’s answer to The CW when it came time for the sequels. Only one of these two, however, can lay the blame for that squarely on the shadow of its own creator’s control. And it ain’t Twilight.

Exercising her directorial oversight and retaining the flavourless eye of once-Glengarry director James Foley, E.L. James’ trilogy closer again utilises the witless foible that is husband Niall Leonard’s feeble pass at screenwriting. This time, though, there’s an added sting in the process – with James’ increasingly trashy and sensationalist plot finding itself smashing headfirst into her screenwriter’s complete void of anything close to self-awareness. The result might want to the new Sliver or something Mickey Rourke would have headlined in the eighties, but it closes out feeling more like an M&S advert with a couple of nip-slips and all the charisma to match.

Dornan continues to sleep-walk his way through playing what he seems increasingly aware is a murder-free Patrick Bateman striken with anhedonia, standing in almost hysterical contrast to the clearly giving-it-her-all Dakota Johnson, whose third go-around as audience proxy-turned-Stockholm-syndrome poster child Ana Steele delivers more of the kind of lip-quivering whisper turn we’ve come to expect three movies in. Former Smallville-paperweight Eric Johnson appears here and there as a salivating psycho – whose own actions somehow pale in comparison to Gray’s – whilst the remainder of the supporting cast largely sit this one out. Most intriguingly of all, and – despite the fanfare surrounding her initial casting last time around – there’s nary a shot of Kim Basinger’s Mrs. Robinson figure to be found. The literal focus of at least one key dramatic sequence, Basinger’s strange omission screams of a relegation to the cutting room floor, only begging the further question of why the three bodies behind the edit on this one couldn’t have done us a favour and cut some of the rest of it out too.

On not only its own level though, Fifty Shades Freed fails to serve on even a required narrative one – with a central “origin mystery” that couldn’t be more glaringly obvious were its end result the actual movie poster, characters who can whittle across entire cities in the blink of an eye, and the sustained repetition whereby a twenty something woman acts independently, gets scolded for it, stands her ground, and is then distracted by something shiny before repeating the process. That’s antagonising, to say the least, but it’s worse that it’s all so boring, that its eroticism is so mass-manufactured in a way that suggest nobody involved in its inception has ever actually experienced an orgasm, and that it’s so eye-rollingly bad on even it’s best moment that you won’t even notice Danny Elfman’s there in the background giving the whole show it’s damned score.

The best way to step back from it all, though, is to take merciful solace in that it’s all over. Sam Johnson and Kelly Marcel got out intact, Dakota and Jamie can take on supporting roles in some emerging action or spy franchise in time for Cannes, and E.L. James – having shot her creative load – might finally go away, her foray into feature films complete and her addition to the pantheon of western cultural narrative having finally been wiped away.