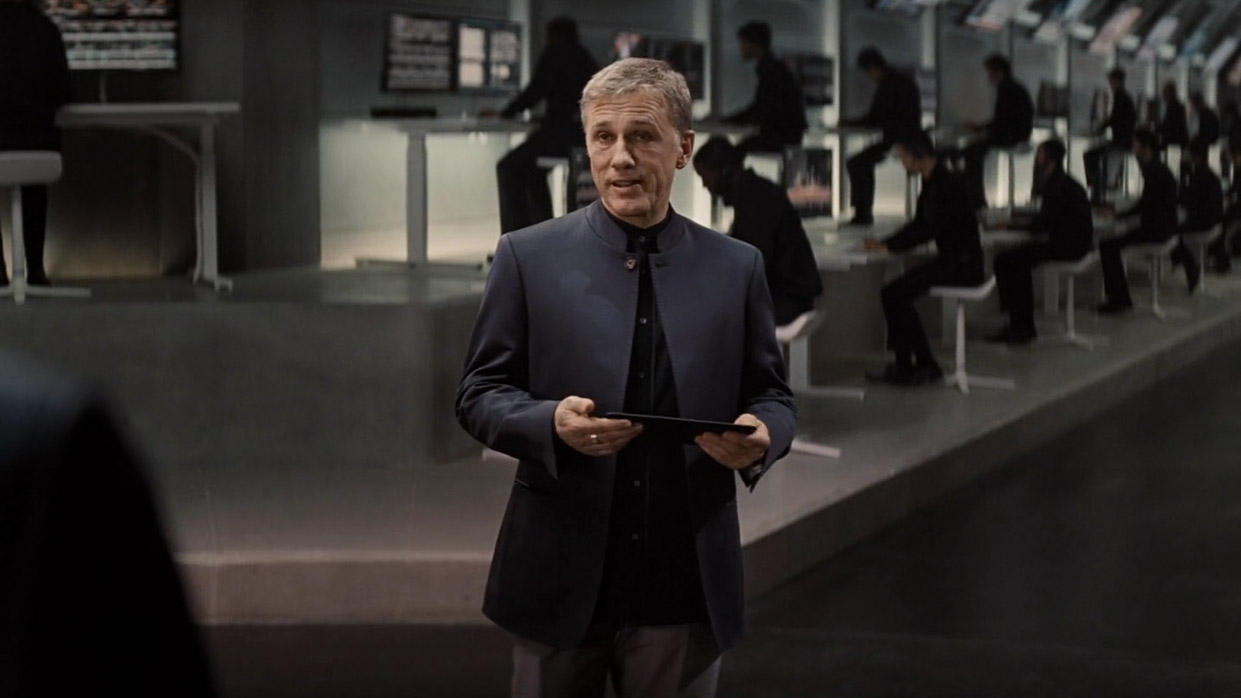 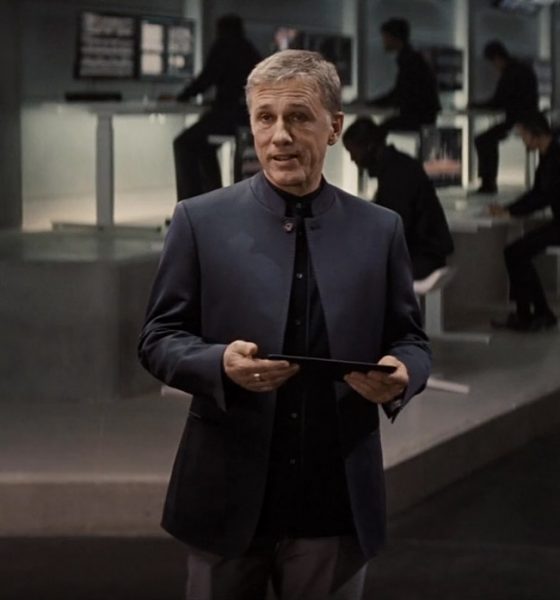 When it comes to stylish agents, James Bond is definitely up there. From Sean Connery sporting his own tailor’s handiwork, to the Italian made-to-measure Brioni suits on Daniel Craig, James Bond is certainly one of the best-dressed characters on the big screen.

But of course, a well-dressed hero needs a well-dressed villain — it’s only right! Bond villains don’t just give the secret agent a run for his money with wits and combat; often, they’re the only other characters in the movie who stand toe-to-toe with Bond’s impeccable dress sense. Is this just for show, or does a Bond villain’s choice of attire reflect something more about the movie? Let’s take a look at the top ten Bond villains according to Screen Rant and dip into their wardrobes to find out…

Max Zorin — A View to A Kill

If there’s one villain who’s famous for their dazzling hair it’s Max Zorin, played by Christopher Walken. Still, the look proved to be simultaneously slick and strange, and a stark contrast to Bond’s then-darker locks.

This could have been the warning signs of his hidden agendas. It almost seems like the man is trying just a little too hard to look unsuspicious. You could, perhaps, draw the same feeling from Zorin’s accessories during the Royal Ascot scene, where the villain has a white carnation tucked in his suit lapel. White carnations are said to represent faithfulness and innocence, which certainly cannot be attributed to a man like Zorin, who is barely loyal to his own men!

It’s still all about suits when we talk about Dr Kananga in Live and Let Die. The drug lord continues the Bond villain trend of being just as well-dressed as Bond, but with a few key notes that are just enough for the viewer to feel uneasy.

Similar to Zorin, there’s a certain sense of understanding in Kananga’s choice to keep a subtly-sharp dress sense, and he reserves his more outlandish attire choices when under the guise of “Mr Big”. Mr Big, a front for Dr Kananga, spends the movie serving the purpose of distracting Bond from Dr Kananga, despite being Dr Kananga himself. From his bright red jacket choices to his later red-shirt and white-jacket combo, everything about Mr Big is a bright, loud distraction.

We could dare to say that Licence To Kill had a better-dressed villain than hero! With Dalton’s Bond sporting some looser-fitting styles, Franz Sanchez also opts for the more casual tone, but with a decidedly more fitted air about him.

Sanchez doesn’t shy away from switching up his outfits through the film. From a blue suit jacket and white shirt combo, to a tan jacket and blue shirt choice. Interestingly, blue suits and grey suits are noted by some to be a good choice to send out a message of loyalty and dependability, highlighting Sanchez’s own value in those traits (and his paranoia of disloyalty in his men).

He can’t be praised for his accessories though, unless you include the rather large iguana on his shoulder in some scenes!

The first of Bond’s villains, Dr No is memorable for his ‘evil doctor’ look. The unembellished, cream-coloured Nehru suit offers little other distraction, giving the doctor a sharp, efficient look befitting the villain. The Nehru jacket was notably once worn by those who had a high social stature, which is perhaps a sad reflection on Dr No’s own backstory as being an ‘unwanted child’. He has built himself into his own semblance of high status, despite his own perceived rejections. 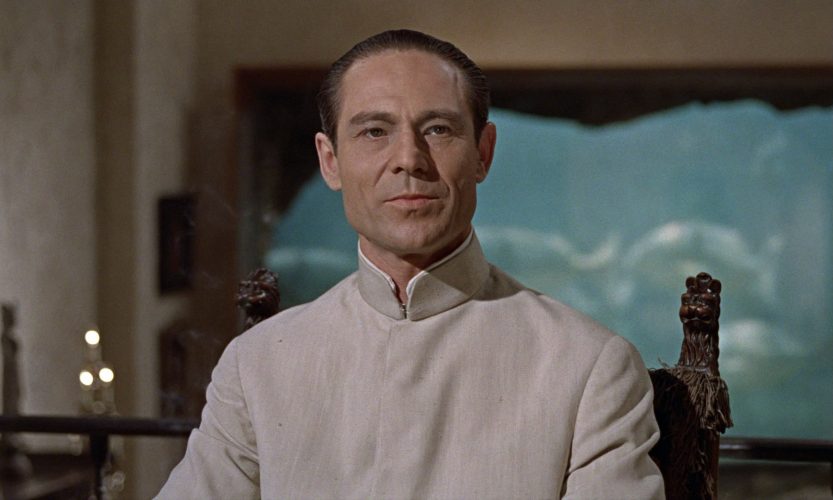 Dr No is successful in achieving the image that he’s a composed villain through his choice of cream and ivory garments. More interestingly, perhaps it echoes the idea of being in an ivory tower; that is, that Dr No’s choice of garments shows how he feels he was rejected by the world.

One thing certainly stands out about him though —those shiny, metal super-hands! With that death-grip of his, maybe buttons were out of the question when getting dressed on a morning…

Trevelyan can certainly be interpreted as being the dark version of James Bond. As such, Trevelyan tends to stick to a very similar style as Bond, with a penchant for black suits and combat fatigues. He’s meant to match Bond in every way, both in intellect and in skill, having been trained the same way as Bond. Unlike other villains, this one’s obviously armed, and he knows all the tricks Bond knows.

You can recognise Trevelyan’s costumes by how dark they are. Bond usually has something to contrast within his clothes (usually his choice of white shirt). His mournful colour scheme could very well be a hint towards one of the former Double-Oh agent’s goals; to avenge the death of his parents.

If you have a lot of money, you can afford to break the rules! That’s the vibe Le Chiffre’s suits give in Casino Royale. 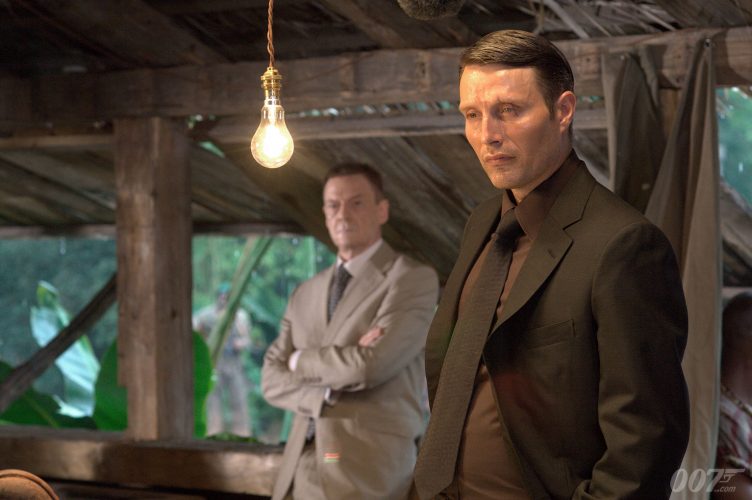 The quality of Le Chiffre’s costume is a giveaway to his character. According to costume designer Linda Hemming, Le Chiffre’s choice of outfit is all about showing off without being noticed. He’s a man who wants to succeed without being seen, who wants his genius applauded, but not too loudly. These two desires would usually be at odds, but they make for a sleek suit of all black to hide away, but lavish velvet to show his wealth.

Francisco Scaramanga — The Man With The Golden Gun

You have to be a suave dresser if you own a golden gun, right?

It’s safe to say that Scaramanga has a strange sense of fondness for Bond, and more than a drop of rivalry and desire to prove himself the better killer, and it reflects in his clothes. His outfits seem determined to state ‘anything you can do, I can do better’, from his shiny choice of firearm to his slick white suit. Interestingly, Scaramanga meets his demise in China, where white can be seen as the colour of death and funerals; coincidence, or foreshadowing?

Worn on anyone else, Silva’s loud, printed shirt and cream jacket would look eccentric. Coupled with the bleached blond hair harkening back to previous Bond villain Zorin, you’d be forgiven for calling this a fashion disaster at first glance. 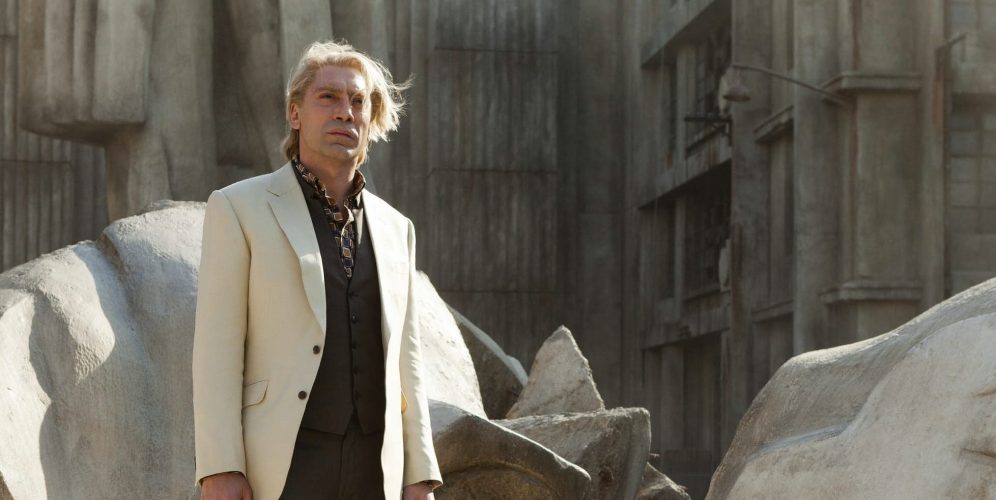 The shirt sends a different message to us worn on Silva, it says: I am the villain. I’m not quite stable on any level. I thought this shirt was a great choice this morning.

When it comes to being the opposite to Bond, Silva takes it to the next level. Yes, he’s wearing a suit as Bond does, but it’s not by any means well put-together in a traditional sense. The colours contrast Bond’s usual go-to darker shades, the addition of prints is very anti-Bond, and it almost seems like Silva is mocking Bond on every level. That’s certainly the message the rogue former agent is going for, as his entire scene wearing this suit is played out as a mockery of Bond. At this stage in the film, Silva does not think Bond is his equal in any way, and he’s letting him know it. Not only does Silva feel confident that he has outsmarted Bond, he thinks he was a better agent, a smarter man, and a better shot.

When the fight between he two men comes to blows, we see Silva switch to darker shades and combat gear more akin to Bond’s own look, as he finally starts to admit Bond’s given him a run for his money and forced him to step out from behind his henchmen and get his hands dirty.

Famous for the quote: ‘No, Mr Bond…I expect you to die.’, Auric’s also known for his love for gold-coloured everything. Dressed in silk suits or woollen golfing attire, you can be sure there’s going to be a shade of gold or close-enough-to-gold brown somewhere on this villain’s garment choices.

Color Meanings revealed that wearing too much gold can give off a sense of ‘being miserly, unkind, lacking generosity and kindness or being over-ambitious’. Check, check, and check.

Is there more to take from this? Probably not. The man’s called Goldfinger. He killed a woman by dipping her in gold. Sometimes, a man wears gold because a man likes gold.

Ernst Stavro Blofeld — From Russia With Love, You Only Live Twice, On Her Majesty’s Secret Service, Diamonds Are Forever, For Your Eyes Only, Never Say Never Again, and Spectre

Bond’s returning enemy, Blofeld doesn’t prescribe to the usual ‘your suit, but better’ look many Bond villains go for. No, Blofeld is a villain who is quite happy to be utterly different from 007, from manner to fashion.

Blofeld is remembered for wearing his iconic Mao suit in a boring shade, echoing the rather listless shaded Nehru jacket worn by Dr. No before him. In fact, Blofeld’s most recent incarnation, portrayed by Christoph Waltz (at the top of this article), would go on to sport a Nehru jacket of his own. Apparently, the new Blofeld’s simple outfit was to ensure all the spotlight for his menace were firmly on his mind, not his physical look. Here is a villain who isn’t going to beat Bond with guns or fists, so he doesn’t need to frighten or intimidate with his look. He isn’t required to engage Bond in a battle-of-the-suits, and more importantly, he doesn’t care to.

Turning our attention to the Mao suit, there’s been many commentaries on the Bond villain’s choice of clothing, with many people quick to point out the link between Mao suits and Communism. 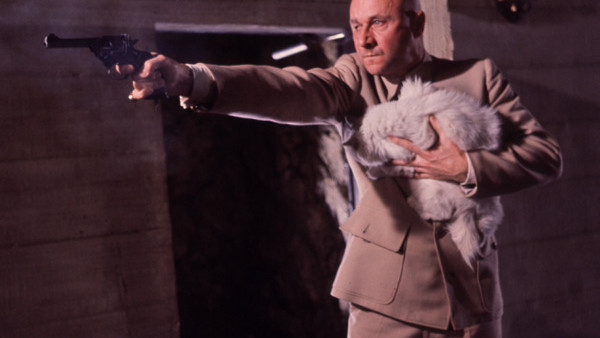 BondSuits.com keenly points out, however, that Blofeld wears a decidedly western white cuff shirt under his Mao jacket, showing his ties to the East aren’t wholly strong.

This article was researched and created by CT Shirts, retailers of men’s casual shirts.

Related Topics:James Bond Villains
Up Next

Most Anticipated Movies of 2019