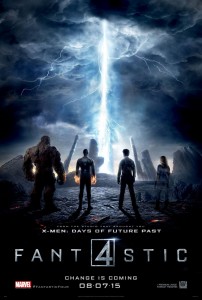 Origin stories have become something of such trite exercises that when we are given something slightly different we’re not sure what to do with it. That isn’t to say director Josh Trank’s (Chronicle) approach to his Fantastic Four reboot is necessarily a strong or even distinct one, but it is something. It certainly isn’t what people would necessarily want or expect (that will be saved for the sequel if they’re granted the opportunity to make one) given this film is more of a prelude than anything else, but there is much to appreciate. At a brisk hour and forty minutes I like that Trank’s Fantastic Four doesn’t take itself too seriously while consistently trying to remain as logical as possible. There is a sense of experimentation to the proceedings, a sense that tells us even the makers of the movie don’t necessarily place too much importance on the going-ons of the plot, but are instead more interested in putting a few players on a certain kind of board and seeing what works and what doesn’t. In coming at Marvel’s first family of superheroes in this fashion it is obvious that Trank and his uber-talented and charismatic cast aren’t actively trying to make something bad or even obligatory, but rather it’s fairly clear they want the opposite. Things may not have turned out as well as they’d hoped in this initial run, but I have a sincere hope they get another shot to work out the kinks and to test their experiment again given it will contain more of the elements audiences want/expect from their superhero movies. I’m not going to completely trash Fantastic Four for trying to do something different with a story we saw on screen ten years ago. This is a story the board at 20th Century Fox likely insisted on Trank and screenwriter Simon Kinberg (X-Men: Days of Future Past) telling purely for the sake of retaining their rights to the characters and no doubt interlocking with their X-Men franchise at some point down the road. And I’m not looking for anyone to blame for the shortcomings of the final product because while there certainly could have been a more clear, precise vision for the film I kind of dug what we have here in terms of tone and character dynamic and only hope they have a chance to develop each further.

It’s no secret this film has been under tight scrutiny from the beginning, whether it be for Trank’s reported bad behavior on and off set or the large deviations from the source material. There’s been a wave of bad press surrounding the film and thus affecting the thoughts of those waiting to see if this thought to be “unadaptable” material could be made right in the hands of a contemporary storyteller. Beginning in 2007, we meet twelve year-old versions of Reed Richards and Ben Grimm. Reed is an aspiring scientist hell bent on cracking teleportation while Grimm is his best friend and the muscle that looks out for him. After moving into the present day we learn the two friends have continued to work on their passion project and have successfully accomplished transporting small inanimate objects to and from somewhere, though they’re not sure where that somewhere is. Approached by Dr. Franklin Storm (Reg E. Cathey) at their high school science fair (yes, Miles Teller and Jamie Bell are expected to be high school age) Reed is offered a scholarship to continue his education and work for Dr. Storm. This work consists of trying to perfect his invention to the point they can send humans to and from this new dimension Reed has somehow connected to. Dr. Storm brings in his daughter Sue (Kate Mara) whose expertise lies in detecting patterns as well as his son, Johnny (Michael B. Jordan), a mechanic of sorts who can build anything. There is also Victor Von Doom (Toby Kebbell), who began this project with Dr. Storm when he was a youngster and who comes to dictate the way things are done. With the hope of traveling to this new dimension themselves, these young scientists rebel when those hopes are put on hold by head honcho Dr. Allen (Tim Blake Nelson). Victor, Johnny and Reed decide to take things into their own hands, with Reed pulling Ben into the fold where things go inevitably wrong resulting in each of the travelers (and Sue, who is attempting to return them to their own dimension) gaining distinct abilities.

There is plenty to like here. I want to make that abundantly clear. First and foremost is the fact that Kinberg’s script (no matter how much it’s been tinkered with) is opposed to following the template of your typical origin story. What could have essentially been explained in an opening credits montage (and some will undoubtedly argue that it should have been) is fleshed out to feature length with a story that doesn’t give us the beats of this happens and then this happens and now they’re superheroes. No, rather than the standard convoluted explanation for putting our heroes in an obvious situation where they get their powers and then are tormented with their gifts that are actually curses for the next hour and a half Fantastic Four decides to spend the majority of it’s time developing the dynamics between the team and putting real world stopping blocks in the way of the stories more fantastical elements. This not only gives the characters time to focus on why they’re doing what they’re doing, but if their ultimate goal (to provide new resources for our planet from this alternate dimension) is worth the trouble if the men running the world are only running it into the ground. “What will they do but the same things with this new world?” Victor asks at one point, thus establishing his mentality and motivation for his inevitable turn to the dark side. Of course, it’s more complicated than that. Victor is more your misunderstood genius than outright evil villain, but regardless he is always something of an outsider. In setting up the inherent camaraderie between Reed, Johnny and Sue as they work to craft Reed’s machine their is a clear distance between Victor and the rest of them. I actually appreciated that Ben was never brought into the lab with the poor excuse of Reed not being able to work without him or something along those lines. Instead, Ben isn’t introduced until Reed is a little tipsy and going to do something he wouldn’t typically take a chance on in his right mind. This alternative dynamic between Reed and Ben adds another layer to the more detailed arcs of Reed, Johnny and Sue. This type of pacing and approach also gives way for our heroes having to overcome obstacles that aren’t just a bad guy trying to destroy the world which, for me anyway, is far more interesting at this point.

Now for the bad stuff. Remember that thing I said about not focusing on a bad guy trying to destroy the world? Well, that eventually happens, but is literally crammed into the last fifteen minutes of the film. For the record, a time jump happens about halfway through the film that I again was into because it presented something unexpected. Not just because the jump was a surprise itself, but because it continued to push the dynamics of the group further by distancing their supposed leader from the rest of the team while giving time for Sue and Johnny to come to know Ben, the one member they hardly met prior to their transformations. In light of the undocumented time that passes Reed is also granted the ability to plant a firm motivator in the ground that also makes room for the logical/dark/gritty/realistic aspects of this version to breathe. It is once the inherently goofy powers of each individual come into play that the film becomes less of an interesting science experiment and more of a by the numbers action flick. I think every action shot in the film was used in some form in the marketing as there isn’t a lot to choose from. Of course, if this proves anything about the Fantastic Four it is that it may in fact be that “unadaptable” material so many claim. The relationships between the actors become interesting given their age and energy to do something life-changing, but it is once they become the titular heroes that things become more routine and handled in such a sloppy manner it gives the impression the whole thing was a bad idea. Like I said in my opening paragraph, I’d still like to see what Trank and Co. might do given the opportunity to follow this up (Fox has already dated the sequel for June 9, 2017, but we’ll see if that holds) despite knowing that it will be what the climax of this film attempts, but for the whole movie. It could turn out just as horrible and put the kibosh on Fox trying to adapt this material, but it could also turn out to be something interesting were the filmmaker able to see his vision through with an approach that didn’t have to adhere to any template. The effects budget could also be improved, because that certainly doesn’t help with the already wacky powers.

To it’s credit, the solid early portions of the film allow the first and only moment the four heroes are together to feel earned in the final minutes. It should also be noted that, as far as superhero movies go, the most cliche thing in the film is the beam of blue light into the sky. This is naturally a part of Doom’s plan to destroy our world, but what doesn’t make this arbitrary plot device feel as vapid as it is is the motivation behind it that was established earlier. There is an Einstein quote spoken in the film that goes something like, “If you can’t explain it simply, you don’t understand it well enough.” and this seems to apply to Trank’s approach as well. He clearly knows he wants to tell an interesting and rather alternative superhero story, but he doesn’t seem to have the inspiration or the knowledge of how to do so without succumbing to the vision of what he (or the studio) thinks audiences want to see. Superhero films are more complex than ever given there are so many of them these days and each feels the need to try and stand out. Fantastic Four is Marvel’s original and longest-running superhero team though, so the only way to make it work completely might be to take a simple approach and little more. Let the characters and team dynamics breathe and the rest will fall into place. Here’s to hoping Trank get’s one more shot with these guys no matter how unlikely that may seem at the moment.

P.S. Miles Teller gets called a dick within five minutes of being on screen. Make of that what you will.