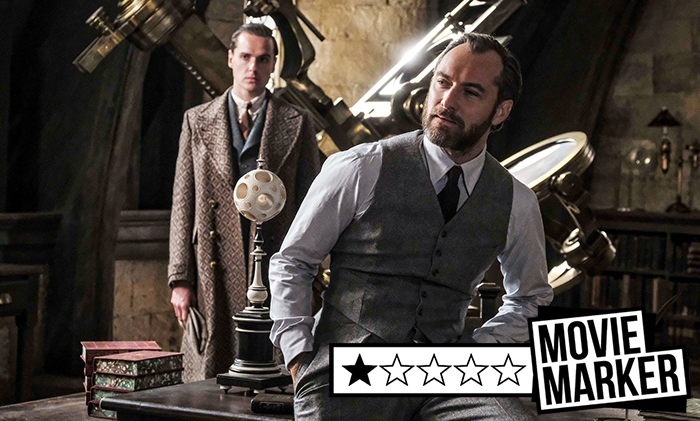 The magic’s well and truly faded with this second instalment of the erstwhile Harry Potter prequel series, as The Crimes of Grindelwald shifts the action to Paris, but its own sensibilities entirely too far into the franchise world-building spectrum that could threaten to unravel it. It never does quite unfurl from the exhaustion of it, that would, after all, suggest there were anything of note at its core. There isn’t. The Crimes of Grindelwald is precisely the patronising box-office-centric cash-grab any decent cynic’s always accused the Harry Potter series of being under the surface; all that’s changed is that, this time, they really can’t be bothered to attempt to mask it beneath any kind of fun.

One of those sequels you can rather obviously tell was never meant to exist, this very-much-a-part-two kicks off unceremoniously (it has no other setting, as you’ll discover over the course of a mind-numbing two and a quarter hours) by setting about undoing literally every closing plot mechanic of what’s come before. Did a character end up in Point A last time? Well, this time they’re going to be reintroduced via what’s either an interesting and poorly lit set-piece or clunky exposition in order to set themselves up at Point B instead, regardless of whether or not it makes sense for them to do so. Only then may the plot of The Crimes of Grindelwald begin. And plot it has. Lots of plot. Tons and tons of plot. In fact, it has very little else but plot. So, it’s somewhat mystifying that David Yates’ sixth venture into what’s evidently now branded as the Wizarding World should ultimately amount to so little.

From what little you’re able to glean of the plot, proceedings involve the immediate escape of evil wizard Gerrett Grindelwald (Johnny Depp) from the prison to where he was sent last time. On the loose once more, Grindelwald sets about exacting his master plan to ensure magical dominance over the human race, a plan that involves the formation of a dark wizarding army and the utilisation of one Credence Barebones (Ezra Miller), with the latter’s death evidently no obstacle for the likes of his contract’s sequel options. The only wizard capable of stopping Grindelwald, we’re told, is that rebellious master wizard Albus Dumbledore (now played in a younger form by Jude Law), but Dumbledore can’t, you see, because… reasons, and despatches a reluctant Newt Scamander to do so in his stead. Because, again, reasons.

Now, you can be forgiven for taking that plot in and wondering just how in the hell Eddie Redmayne’s Newt need in any way be present for any of this, and, frankly, you’d be right to do so. Certainly, Eddie Redmayne appears to be wondering the same – his contingent of the cast (essentially the main four from the last movie) each make what can charitably be described as diminishing returns, offering more outright effort in their performances to a film that really can’t be bothered to do much with them. They’re not important, you see, Dumbledore is. Grindelwald is. And creator/screenwriter/living cash hoover J.K. Rowling genuinely cannot be bothered to pretend otherwise. That movie snotty naysayers claim they always somehow see whenever there’s a new superhero movie out? The one that’s nothing but nonsense, world-building and a half-hourly set-piece? That movie actually does exist. And its title is The Crimes of Grindelwald.

Losing the magic of even its own musical arrangement, The Crimes of Grindelwald is an outright disaster not just of a seasonal tentpole release, but of a franchise picture full stop. Its script works exhaustingly to tie itself in knots to go essentially nowhere, its culmination consisting of literally nothing more than two pieces of unceremonious lore being shouted about in canon, each essentially lionised by Rowling so that at least one of them can no longer be called out as the laziest, most cynical, and ethically bankrupt product of the entire franchise. She fails in this endeavour, as, indeed, does Yates in delivering a dreary and uninvolving film to which his cast aspire to inject life, only to reanimate the narratively dead instead.

Legions of Potterites will doubtless flock to the nearest multiplex the moment the doors open, and, to be fair, that is absolutely the power the brand has and ours is not to question. If the priority of this series, though, genuinely is the continued pumping of revenue into the Rowling estate landscaping fund, would it really be too much to ask to even attempt to make it a good time? Can we not at least get some enjoyment out of this? A big ask, I know. But it’d behove Rowling, Yates, and everybody involved in this shill of a series to at least consider we might want some excitement next time around. Maybe when the second act stops dead for ten minutes to give us a canon origin story for the damned sorting hat.