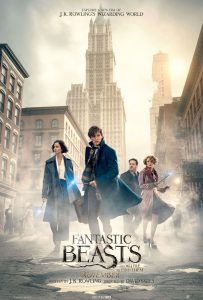 Apart from the first movie in the series, I’ve lived a life almost totally untouched by Harry Potter.  Not that I’m oblivious of the bespectacled boy wizard, but as far as knowing the stories, characters, language and culture are concerned, you can pretty much forget it.  So I came to ‘Fantastic Beasts And Where To Find Them’, the first in the latest J K Rowling franchise, pretty much in blissful ignorance.

Did it make a difference?  Not especially, because this is very much a scene setter.  It’s 1926, 70 years before a certain Master Potter arrived at Hogwarts and discovered the book Fantastic Beasts And Where To Find Them.  Wizard Newt Scamander (Eddie Redmayne) has been travelling the world, collecting and studying the fantastic beasts of the title for his latest book, as well as returning them to their original homes.  At the end of his trip, he arrives in New York and it’s obvious something destructive is on the loose and causing havoc.  He gets embroiled in helping the local wizard community to sort it out although the fact that he’s brought his beasts into the city and one has escaped doesn’t go down well.  But there’s more to the chaos than at first appears.

And there’s certainly a lot of scene setting, so much that it ends up slowing down the story from time to time.  While those moments don’t last long – they’re usually rescued by an action sequence or something cute and loveable involving one of the beasts – they do give the film an uneven tone.  But they also whet successfully whet the appetite for part two, which is due in 2018 and also directed by David Yates.  All five parts are scheduled to have him in the director’s chair and, based on this one, it’s a shrewd move.  He directed four of the Harry Potter movies, so he’s steeped in the subject: what he doesn’t know could fit on a Bowtruckle’s finger nail.  Assuming they have them.

Yates has done a solid job, helped by some very good special effects with beasts of all sizes, from small to enormous.  He’s assembled decent cast as well.  On this evidence, Colin Farrell should play the baddie more often, while Ezra Miller is a world away from the Kevin of ill repute, looking more like something out of a Dickensian workhouse.  Top of the pile comes the double act of Redmayne’s Newt and Dan Fogler as a would-be baker and non-maj (or muggle, if that means more to you).  It adds a buddy movie element to the action, one with lots of humour, especially the physical variety where Fogler is concerned.  Redmayne has the right level of eccentricity combined with innocence and awkwardness to play the good natured, animal loving wizard, although you do wish he could see what’s under his nose when it comes to Porpentina Goldstein (Katherine Waterston), a determined young witch.  But that’s obviously for another episode.

For all the humour and cuteness, especially in the first half, Yates also gives us a lot of darkness, just like he did in the latter Harry Potter films.  This raises its head in part two and centres on the mistreatment of children, a Rowling perennial, which plays a key part in unravelling the mystery of the marauding beast in the city.

Is it magic?  Not quite, but it certainly has magical moments, especially courtesy of the cuddly kleptomaniac Niffler and the Bowtruckle who lives in Scamander’s coat pocket.  Spectacular when it needs to be and hugely entertaining, it’s a film that stands up very much on its own, so it doesn’t matter over much if your knowledge is minimal.  It’s enjoyable and imaginative entertainment.  Nothing more, nothing less.

In The Heat Of The Night