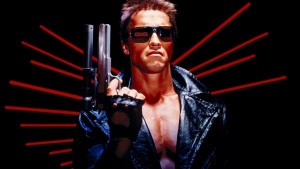 When discussing the Aliens and Terminator films, two large franchises that started in the 80’s and are handing on for dear life thirty years on, certain comparisons can be made.

For one, the first films of each series are smaller scale character pieces compared to the blockbuster action pieces their sequels are. Each, like it or not, I wouldn’t call action films either. Both Alienand The Terminator are horror films at their core, even if The Terminator has more of a modern, down and dirty, realist feel to it than Alien’s sci-fi setting.

Just look at what it chose to display as its cover image – the intimidating preciseness to Schwarzenegger’s stance, the red eye that only enhances his inhumanity. As opposed to other action films with similar poster like Eraser or Cobra, it’s not someone posing to seem macho – The Terminator is a killing machine and that’s what it’s good at. Everything else is superfluous.

In this regard it has more in common with the titular Alien than other 80’s antagonists. Tying him clearly to a Slasher villain heritage, his pursuit and killing of the various Sarah Connors’ drip with scenes of sadism, framed to almost give the audience a visceral thrill at their slaughter. Take away his modus operandi of a gun and he could be Michael Myers, an unkillable bogeyman looking to slaughter women. Even the name itself ‘The Terminator’ is singular in its meaning – it kills things, the gruesome visage revealed in the closing scenes being the purest expression of what humanity associates with death. All of these small little details add up, until before us stands a terrifying, nightmarish personification of the Grim Reaper.

Unlike the monstrous Alien though, the Terminator has recognisably human features. It represents something worse that death itself, or perhaps another meaning we shy away from as a society. For the Terminator represents irrelevancy – the oncoming, constant march of humanity and technology, that one final thing that gets ahead of us and leave us socially irrelevant, effectively ‘dead’ and useless to others. We make jokes about it, how we don’t get new technology or how we’ll just end up like our parents. But the truth is, as social creatures we fear being left alone.

Notice that throughout the film, Sarah Connor slowly has other people stripped from her by The Terminator. Even the lover and father to her child is taken in horrific circumstances, until it’s just her and the Terminator. One person facing the eventual social and real death that comes to us all, out paced by technology we can’t comprehend, let alone best. Her refusal to back down, to stare her eventual obsolescence in the face and come to terms with it is her core strength and allows her to survive where others would succumb.

But as she rides off into dark storm clouds in the film’s closing shot, even she knows she has only earned a reprieve.

Related Topics:FeatureThe Terminator
Up Next

One Musician’s Response To Whiplash