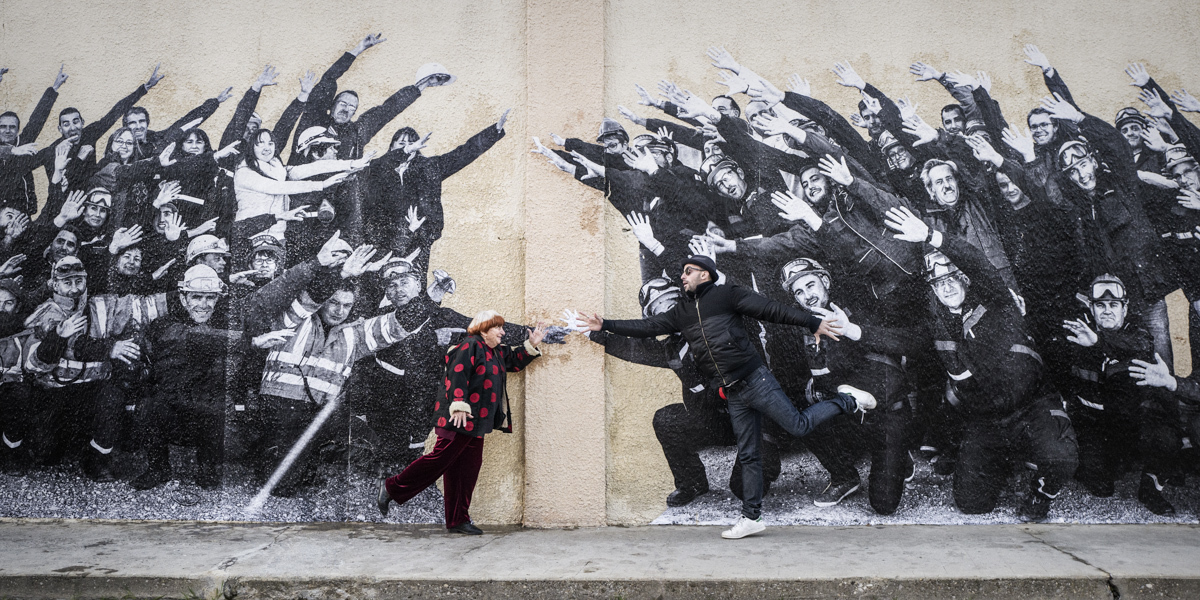 One of the biggest problems with great art, and the great artists behind it, is the notion that it isn’t for everyone. Of course it’s for everyone, and it always should be. Creators who lose sight of the real world around them, and the real people who would admire their work, often fall short as they lose that insight into what truly matters. Great art without openness and empathy is rarely that great at all.

The biographies of film director Agnès Varda and guerrilla artist JR don’t inspire much hope that they would be at all in touch with the average Jean or Jeanette.

She emerged from the French New Wave of the 60s, rubbing shoulders with Godard and Truffaut, while dabbling in surrealist art and photography, and eventually cut a niche as an impressionistic documentary maker wandering the world beneath an angular bob of grey hair tipped in brilliant red, continuing to create as she edges into her 90s.

He drives around in a van made up to look like an analogue camera, printing large-format images from its side like a giant Polaroid, and he pastes them on the sides of buildings and structures, all the while never revealing his true name and obscuring his eyes behind ever-present sunglasses.

Whatever presumptions their combined histories inspire, it’s undeniable that the two together have created in Faces Places (a translation of the delightful French title Visages Villages) an inherently humane and undeniably wonderful little ode to the everyday wonders of French life.

Bundling together into JR’s infamous van, the unlikely pair trundle across the country to all its obscure and disregarded corners – the mining villages, the goat farms, the docks and the small towns that collective culture and government policy often disregard. There, they make it their quest to find people, any and all kinds of people, and hear their stories.

Frequently moved and often awed – as with the tale of an ageing miner’s daughter who refuses to leave her family home on a now-deserted street – Varda and JR photograph their subjects and pay tribute to the quiet humility and enduring importance of their lives by installing the images on building façades, farmhouses, shipping containers, trains and oil tankers for all to see. Given the time and space to speak for themselves, the weird and wonderful people the two meet are sheepish, tentative and wonderfully unique.

Playing alongside these vignettes of rural French life, a narrative through-line is generated in the mutual respect and budding friendship that develops between the two artists. Though often quite stagey and more plainly constructed than the interviews and installations that give the film its meat, these little asides have their own offbeat charm and humour, as Varda reveals the day-to-day inconveniences of her advancing age, and slowly succumbs to a grandmotherly obsession with getting JR to remove his irremovable shades.

It is a friendship of equals and the catalyst for a project of innate charm and respect for its subjects. The installations themselves, more a trademark of JR than of Varda – who more likely influences the moving image here rather than the still – are impressive and humbling, enjoying both weighty meaning and intent alongside everyday accessibility and joy. What results is an amicable, oddball and wholly delightful snapshot of a country whose international perceptions are so often focused on its capital. Both the faces and the places that Varda and JR uncover together are well worth the visit, and show the true value in making art for all.