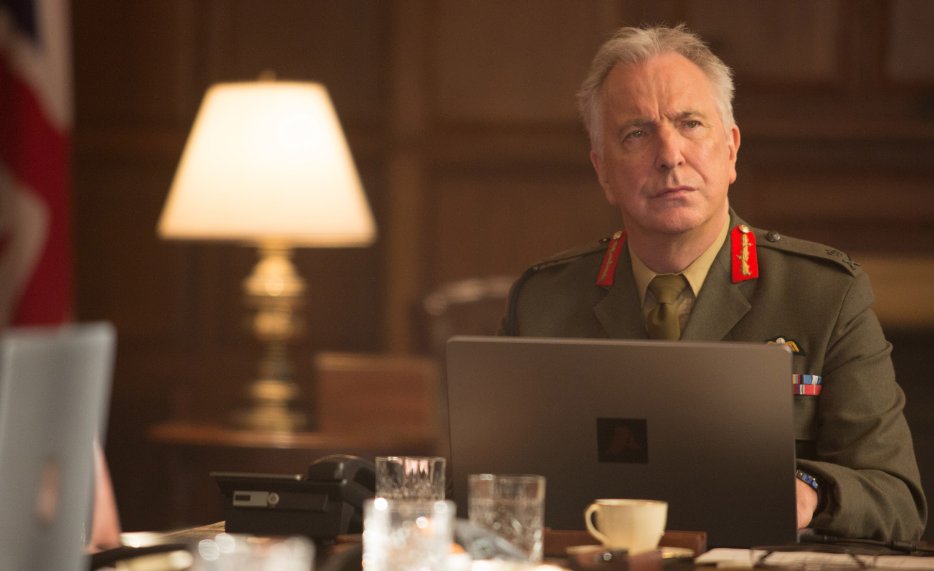 It’s almost inevitable that Gavin Hood’s “Eye In The Sky” will attract attention.  It’s Alan Rickman’s last film, which tinges it with sadness, but that shouldn’t be allowed to overshadow an neatly choreographed war drama which is anchored very much in the present day.

In a military base in the UK, Colonel Powell (Mirren) is in overseeing an operation in Kenya to arrest three high-ranking members of Al-Shebab.  A drone has tracked them down to one particular house, but that’s about the only part of the plan that goes smoothly.  As Powell copes with politicians in Whitehall and on the other side of the world, as well as the drone operatives in their Las Vegas container, the mission changes from capture to destroy.  But as the operatives are within a whisker of squeezing the trigger to let loose a bomb, something comes into view that changes that situation all over again…

The story is set out like a jigsaw, with characters in Nairobi, the UK military base, Whitehall, the American air force base in Las Vegas, China, and several other locations through the military equivalent of Skype.  And, when we’re away from the action in Kenya, the focus is very much on all the interactions and politicking up and down the chain of command.  In the middle of it all is Mirren.  She’s been pursuing the three terrorists – one is a woman British citizen (echoes of the much-publicised so-called White Widow) – for six years and today is the day they capture them.  So nothing, but nothing, is going to get in her way.  But when it becomes apparent that the terrorists are planning their own attack, the nature of the mission changes and the drone in the sky is primed to drop a bomb.  And that’s when something gets in her way.  A little girl, selling homemade bread within the impact area of the explosion.   So, endanger the life of one little girl to save several hundred?  Or save her and allow many more to die and be injured?

Frustratingly for Mirren, nobody wants to take the decision. She plays it by the book, asks for legal advice – and it’s promptly taken higher, involving the Minister, the Secretary of State for Defence, the American Secretary of State ……. But, partly down to her own ruthless determination and her frustration with the proverbial book, she gets her way.  She coerces one of her team to be creative with his calculations about the blast area.  Another dilemma, all about means and ends.

The second half of the film is full multiple moral and political problems, adding to the inherent tension.   Even the little girl contributes to the steady build towards the climax.  The seconds are counting down before the bomb lands and she has just two loaves left to sell.  But will anybody buy them in time for her to get out of the way?  And, among the growing tension, there’s yet another dilemma lurking in the background.  This time about the lower ranking soldiers and operatives who have to implement the decisions taken by the senior officers and politicians – whether they agree with them or not.  If the truth ever comes out, who will carry the can?

The film benefits from a strong cast with performances to match.  Mirren is less glamorous than in some of her more recent roles, but here her backbone is made of pure steel and she is, in management jargon, the ultimate completer-finisher.  Rickman is her commanding officer, standing in between her and the politicians: he may appear pompous, but we get a glimpse of the family man floundering when it comes to buying the right doll for his granddaughter.  He’s also the voice of the soldier who’s been at the sharp end, tartly pointing out to Monica Dolan’s junior minister that she’s experienced the whole incident along with her coffee and biscuits.  Watch the smaller roles as well – Dolan, in particular, and also Barkhad Abdi as the man on the ground who quite possibly is the little girl’s only hope of escaping the bomb.  Not that she knows that.

It’s all good, solid, topical stuff, without being jingoistic or flag-waving.  “Eye In The Sky” is more about the human issues that go with modern, remote warfare.  It’s not the first movie with a drone at its heart and it won’t be the last.  But it gives you plenty of think about, no easy answers and a hefty helping of tension.  It also serves as a reminder that the person with their finger on the trigger is at the end of a very long line – one that bounces up and down like a yo-yo when it comes to making a decision.

Jane Got A Gun