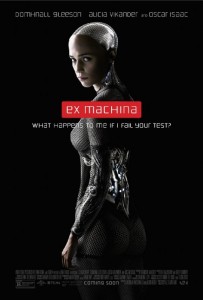 In Ex Machina, Caleb (Domnhall Gleeson) is invited to the estate of whimsical creator Nathan (Oscar Isaacs) to test the capabilities of his new A.I., Ava (Alicia Vikanda). What at first sounds like a simple experiment becomes much more complicated when Caleb begins to fall for the breathtakingly beautiful visage of Ava.

The film is at its heart a morality tale, forcing its characters into isolated environments and seeing how they react. In the first few minutes Caleb is introduced and brought from his cubical office job into Nathan’s home underground in the wilderness. It isn’t long before the pretence of a gentlemen’s hangout is thrown away to reveal the truth of the situation, a smart decision that allows the film’s most intriguing character to be introduced all the sooner.

Ava is an intriguing machine, at once incredibly human, with all the vulnerabilities that implies. Vikanda portrays her as slightly off, being almost a little autistic in her thinking processes. While it’s clear Caleb falls for her almost instantly, it’s often hard to tell whether she actually feels anything for him or if it’s simply a programmed response. The characters instant shift from shyness to a more direct, forceful persona during the power outages, the only times when Nathan can’t watch their conversations, makes her even harder to pin down. Is she using Caleb just to escape or is she being honest when she expresses interest in dating him?

One of the more disappointing things about the film is that it actually gives a definite answer to these questions. Yes I know it’s odd to be annoyed by a film actually answering the questions it poses, it could have been more interesting to leave Ava’s true nature open to some more interpretation. The film still leaves the question of whether Ava fakes all her emotions but her sudden switch to a cold machine towards the end feels like a betrayal of the audience.

Gleeson’s character is in many ways a bit of a bland character. Most of his actions in the film are simply shaped by his relationship with Ava, lacking much of a personality of his own. He is very much of a tool throughout the story, the one there to make the discoveries about Nathan’s secret activities but without much of a story of his own. In some ways he represents the frailties and weaknesses of humanity. He is a small, unassuming man; not quite as smart as he’d like to believe. He’s suckered in by the charm of Ava, seemingly just because she is a attractive woman that pays him the slightest bit of attention.

There’s also a hint that the fact she is a machine makes her even more beautiful to him, being a coder who spends much of his life behind a computer screen. The film is more subtle with these character elements, leaving it up to the audience to fill in the blanks, well apart from a small mention of his many pornography searches. It’s hard to know what the director’s intention was with Caleb, he essentially seems to be an innocent man who is manipulated by two much more powerful forces.

Nathan is in many ways a contrast to Caleb, a seemingly outgoing individual who isolates himself for fears of privacy. An unrepentant alcoholic who is rarely seen without a drink in his hand or a raging hangover causing him bother. If his creation of a machine makes him a god than he is a very wicked God indeed, his treatment of his children is horrific. One sequence shows him dismantling past robots who have proved unsatisfactory by first killing them and tearing them apart. His treatment of the completely silent Kyoko, who is equal parts maid and sex slave, reveals his dark nature early on; her slight failure giving way to explosive anger.

Ex Machina is an interesting take on an old question: what exactly makes someone human? Ava is a machine but in most ways appears human. As pointed out early on, if someone just spoke to Ava without seeing her they would instantly believe her to be a human. Nathan is in many ways inhuman, contrasted with Caleb’s innocence. I found myself disappointed by the ending because it decides to answer the question of how human Ava is. It portrays her at best selfish at work as a calculating, sociopathic machine with no trace of emotion; a betrayal to her character development throughout.

Far From the Madding Crowd