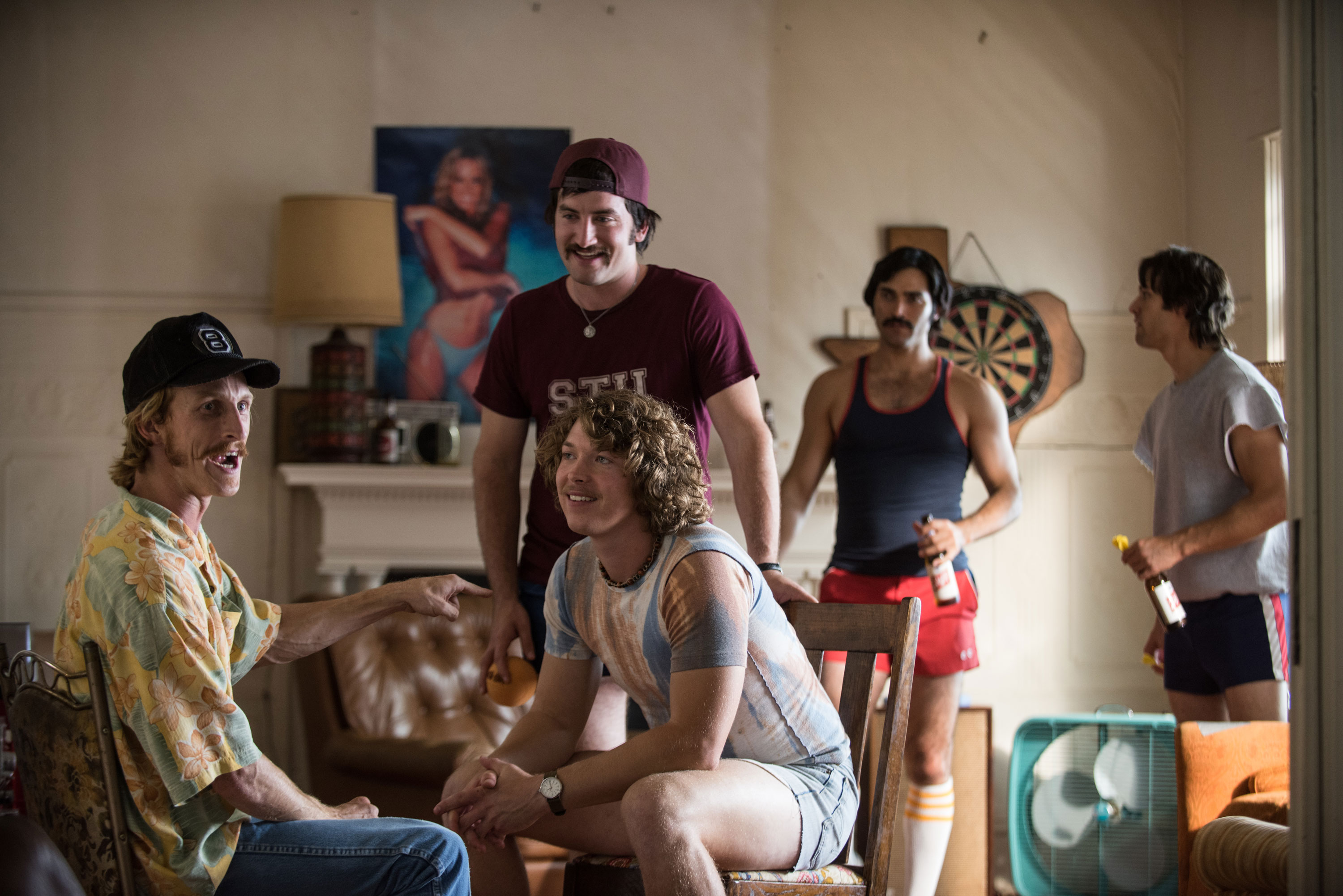 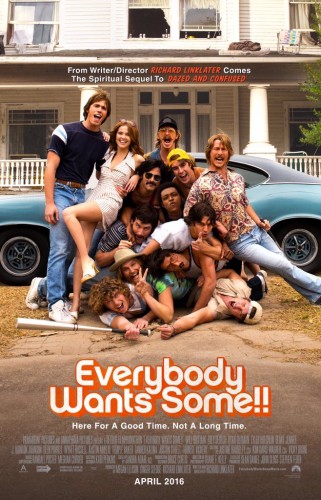 “There’s a party down on the corner, do you want to go? They got rhythm, a little blues, and a whole lot of soul. I don’t care what you’ve got to say,  you’re comin’ with me anyway. We’re not here for a long time, we’re here for a good time.” So go the words of Huey Lewis and the News’ 2001 song “We’re Not Here for a Long Time (We’re Here for a Good Time)” and while Richard Linklater’s latest film takes its name from the more appropriate Van Halen track from 1980 the writer/director is echoing the same sentiments as Lewis and his News were in their song. One of the many characters in Linklater’s entertaining ensemble even throws out the familiar saying at a moment when we’re discovering the drastic steps he’s taken to recapture his more idyllic past. An idyllic past is mostly what Everybody Wants Some!!is really about, though. The ability to escape and live in an existence, at least for a period of time, that feels like the perfect mix of being care-free and celebrating that freedom by partying as consistently as possible. This window of unattached existence is what Linklater seems to have deduced brings out the most natural form of who we are meant to be as human beings. In experiencing this type of freedom by simply existing we are allowed to pine for that period of time the rest of our lives as most will go on to conform with the societal structures expected of them. Thus, our idyllic past is created with the key being it must remain that idyllic high point without any attempt to recreate such memories because we all know real, genuine fun can’t be commonplace. It can’t happen every night and the same thrills remain intact. If humans were to live forever as the characters in Everybody Wants Some!! do over the course of this three-day weekend we’d likely live half as long and grow tired of the emptiness drinking and promiscuous sex with many anonymous partners would eventually bring. And so, what Linklater is slyly conveying is that of a cherished time in his own life; memories that inform the man he is today with the added acknowledgment that it can’t last forever, but it’s beyond critical to drink in when that time arrives.

Set in August of 1980 we are first introduced to Jake Bradford (Blake Jenner) who is an incoming college freshman at Texas Southern University and a baseball player to boot. Thrown into a world he isn’t quite sure of and has no set of expectations for Jake quickly becomes friends with the other baseball players who have been assigned to live in a house off campus. Among those on the team who become key players are Finnegan (Glen Powell) a senior (or maybe fourth of fifth year senior) who is up for literally anything and brings with him a philosophical wisdom that he finds necessary to apply to every situation. There is actual senior and pro prospect McReynolds (Tyler Hoechlin) who can’t stand pitchers which, unfortunately, is what Jake is. Speaking of pitchers, there are transfers Willoughby (Wyatt Russell) who likes to smoke pot and talk about the meaning of life as well as Jay (Juston Street) who comes from Detroit and talks a big game about everything, but doesn’t seem to be able to actually back any of it up. There are the other, upper class party guys like Roper (Ryan Guzman) and Dale (J. Quinton Johnson) as well as fellow freshman Plummer (Temple Baker) and Brumley (Tanner Kalina) who fall in well with Jake while other newcomer Beuter (Will Brittain) becomes the picked on deep-southerner who has to return home even before school starts to see his girlfriend. All of this characterization and relationship building and defining is more or less what the movie comes to focus on as there isn’t anything resembling a plot, but more just a countdown until the first class of the semester. Our main character is undoubtedly Jake and we get something of a plight on his behalf as he runs into a beautiful girl (Zoey Deutch) on his first afternoon in town while riding around with Roper, Finn, Dale, and Plummer that sets him on a path to figure out more about this mystery girl. This only enables an even further extension of the identity crisis-inducing weekend these guys are unaware they’re about to embark upon. As we come to figure out where each of these individuals fits into the scheme of their respective group we come to recognize from our own set of peers the roles we all tend to slip into even if we don’t identify with every or even any of the characters in this particular setting.

As the film begins it is wholly welcoming, but there is something off. Regarded and sold as the “spiritual sequel to Dazed and Confused” there is an expected level of aimlessness paired with a great soundtrack that elicits the early eighties more than anything else, but there is something about the polished aesthetic that makes the film feel like something of an imposter right off the bat. While the actions of the characters, especially their reciting of large chunks of “Rapper’s Delight” as they drive around slowly, are charming and one can’t help but smile the look of the movie not being that of a movie that actually came from the eighties detracts slightly from being able to fully immerse one’s self in the film. In some ways it initially feels too much like a bunch of guys playing dress-up with the bad, but appropriate mustaches and dolphin shorts galore, but slowly we ease into the period and accept that while we’re supposed to be seeing this through rose colored glasses we aren’t actually seeing it through the tints and tones that plagued the photography equipment of that decade, but rather through what it actually looked like leaving it to the characters and the emotionality to really connect with audiences. Fortunately, Linklater is a pro at doing nothing and something all at the same time and he stretches that muscle multiple times here. By crafting dialogue and scenarios that allow these young and inexperienced actors to bring genuinely convincing turns to the dynamics at play allows for the smile to remain plastered across our faces. And to that degree, the film is infectious. Despite what might be perceived as shortcomings or factors that, in the beginning, seem off-putting Everybody Wants Some!! quickly becomes irresistible in the charms it consistently displays and the small moments and conversations it taps into that paint a fully formed picture of the point in life that these characters are in, how far their psyches have matured, and why the fact they have no other goals than drinking and getting laid make perfect sense. In his screenplay, Linklater dives into themes dealing with the different natures of individuals, specifically drawing on the competitive nature of his core players and the environment that creates, but in the end Linklater is again stating the importance doing things to the best of one’s ability, having as much fun as one can, and playing as hard as one can to make the most out of a time when you might feel stuck, but have yet to realize it’s the freest you’ll ever be.

Speaking of the young and inexperienced cast, it is to their credit that we become as entranced in the efforts of these characters as we do. Much like with Dazed & Confused there is some expectation for members of the cast to become something akin to Matthew McConaughey, Parker Posey, or Ben Affleck, but that pressure seems to have been non-existent during shooting as Jenner effortlessly embodies the cool, but still ripe and unaware freshman that needs to be present in order for us to believe Jake is fresh out of high school, but still easily accepted by his more seasoned peers. Besides the tangible chemistry between he and Deutch (daughter of Lea Thompson) Jenner plays the middle ground perfectly, both up for what adventures his fellow ball players offer up while being the right amount of cautious as he figures out exactly where each of these guys he just met lands on his own sanity scale. Figuring the atmosphere out and understanding the range of what is acceptable and what’s not Jenner gives our surrogate into Everybody Wants Some!! a distinctive angle on this introduction to this college while allowing us to get to know these other interesting characters who admittedly are allowed a little more room to stretch their quirks and thus the impressions they leave on us. The one who stands out the most and the easy MVP of the ensemble is Powell (Expendables 3) who, as Finn, brings all of what our characters are experiencing and encountering into perspective. He is the default party guy who isn’t afraid to try something new and has the guts to look stupid, but in having such an outlook he has acquired a knowledge and position that provides fun and interesting insight for those willing to follow him. Russell (son of Goldie Hawn and Kurt Russell) is pretty fantastic as the nostalgia-pained Willoughby, especially in a scene that revolves around smoking herb and his musings on topics ranging from The Twilight Zone to telekinesis. Guzman and Hoechlin are equally as effective in their “cooler than you” mentalities while Street gives us the biggest caricature of the piece, but also delivers some of the biggest laughs. In the end, Everybody Wants Some!! is a time-tainted character study that makes us wonder not who these guys ultimately became, but if they met their expectations enough during this time to be able to never look back with regret. With the indisputably awesome soundtrack and ability to keep us grinning throughout they can be assured they did just that.