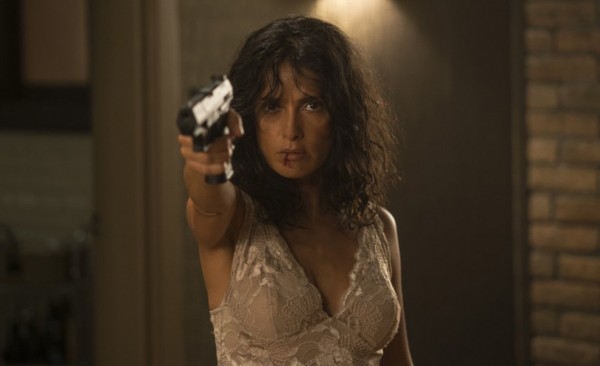 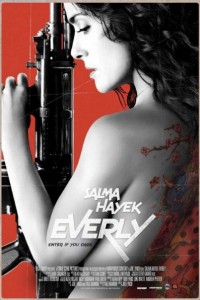 I don’t know what the crawlspace is like in your apartment, but mine could not adequately store a bunch of dead bodies. This is one of the contrivances in Everly, director Joe Lynch’s hyper-violent but cartoonish film about a sex slave, Everly (Salma Hayek) trying to be free of her pimp lover, Taiko (Watanabe Hiroyuki).

When we first meet her, Everly, naked with her back to us revealing an elaborate tattoo, enters the bathroom to recover from sexual abuse. She calls a cop who does not answer. Then she pulls out a gun hidden in her toilet. Will she shoot herself? If so, that’ll be the shortest role for the actress since Grown Ups 2. In fact, she takes revenge on the men who abused her, clients of Taiko.

Everly desperately wants to be united with her young daughter, Maisey (Aisha Ayamah) raised nearby by her mother. To do that, she needs to be free of her pimp. But he has put a $50,000 price tag on her head. Neighbours also in the prostitution business, who might have popped round to borrow a cup of sugar, turn up instead with guns and knives.

This is an unashamed ‘B’ movie in the Kill Bill tradition, though the heroine is motivated by survival not revenge. It is filmed with a self-imposed restriction. The camera never leaves Everly’s apartment. Lynch had the resources to make a multi-location movie – he filmed this one in Belgrade, Serbia, but if you can’t be inventive with the plot, you can at least do something with the storytelling.

Lynch’s film threatens to be truly nasty, but always pulls back at the last minute. This is not to say that Everly doesn’t walk around with a gunshot wound, but we don’t have the real sense of serious injury – of someone close to death – at any time during the 90 minute movie. Rather we know the story is building to a face-to-face confrontation with Taiko.

Dramatically, the best early moments involve one of Taiko’s goons, barely alive on Everly’s sofa. He took no part in her (off-screen) brutalisation and explains that men in his position acted out of fear. He is an ‘almost character’, superficially sympathetic, but no one’s husband or father.

Undoubtedly over-the-top, we enjoy Lynch attempting to tell his story through a self-imposed limitation. The best moments are the fastest; the worst when two women squabble over the $50,000 bounty – the punch line is predictable. Classified ‘18’, there is nothing in it that a squeamish person like myself couldn’t watch. This may be disappointing to some audiences, but it is surprisingly inoffensive. If you consider how many jokes in the 12A rated Pitch Perfect 2 rely on racial slurs, this is more surprising