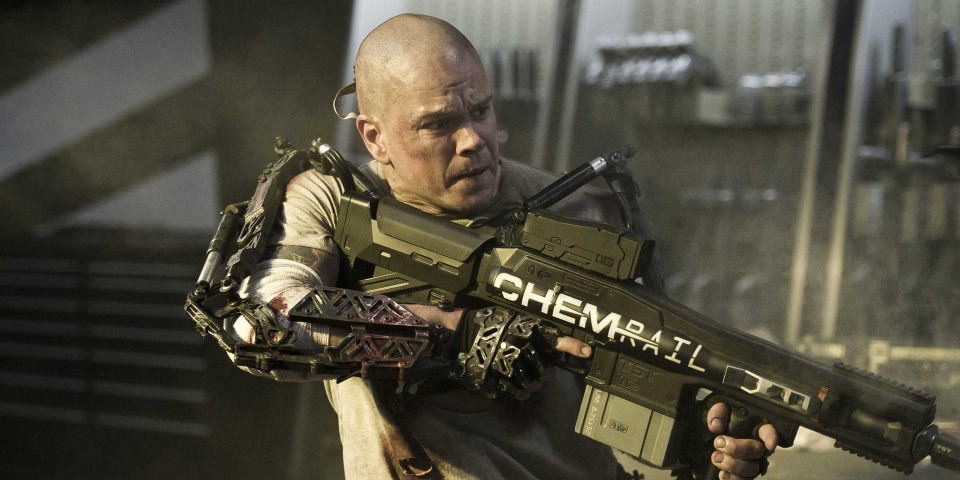 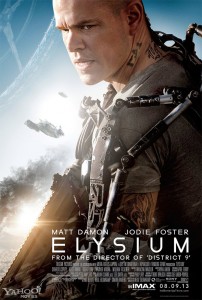 Elysium is as much a disappointment as it is a success. While director Neill Blomkamp’s first feature came out of nowhere with no sense of expectation and no precedent, it is because not only of the success of that film, but the quality that the bar was pretty high for his sophomore effort. I was especially intrigued by Blomkamp’s second effort due to the way he was able to integrate such a strict science fiction plot into a documentary-like style in District 9. The worlds were blended so seamlessly to the point the audience was able to accept that this was not only an allegory for apartheid, but was a finely crafted, and emotionally poignant piece of filmmaking. While much of that could also be applied to Elysium the difference unfortunately comes in the latter part of that description where, while there is ample amounts of allegorical messages and high-tech science fiction, there isn’t that element of the film that hits an emotional connection with the audience that makes the film as memorable as the way the directors previous film. What makes the movie just as much a success though is the fact that despite all of this, it still represents some of the better things about large scale filmmaking in today’s world. Blomkamp made District 9 for a reported $30 million, but Sony gave the director a reported $115 million for his follow-up and to this great advantage the director created a fully encompassing world that gives the film real scope, real consequences, and a platform big enough to tell a story that parallels the issues of immigration and health care in today’s world. While the more money you have the more extravagant the film can be, but what seems to have been lost in the process is the personal touch that was such a crucial element in his debut feature. All of this is to say that while I thoroughly enjoyed myself in terms of pure entertainment value (there are a few great fight scenes, interesting characters, and a bevy of baddies), but I was hoping for more of a compelling story, something that might move me, affect me, or leave me thinking about the film days later. Instead, what we have is an average action flick more in the vein of White House Down and 2 Guns than a film that has aspirations bigger than delivering thrills in the form of explosions.

The good news is there is a lot going on here and lest I gave the wrong impression, a fair amount of substance in the story being told and an obvious degree of craft in the way the plot is executed. We are introduced to Max (Matt Damon doing the solid everyman act he has perfected) who, as an orphaned child, dreamed of escaping the overpopulated and ruined earth for the pristine, man-made space station known as Elysium. This space station is filled with the wealthy and privileged who live a luxurious lifestyle while strict laws are enforced that prevent the citizens of earth to live there. That isn’t to say people don’t attempt to reach the coveted Elysium as, among many other things, they have devices known as med pods which can presumably cure anyone of anything that might be affecting their health. These med pods become of increasing importance after Max is exposed to a deadly amount of radiation and is re-united with his first love from the orphanage, Frey (Alice Braga), who has a daughter suffering from Leukemia. Max seeks out an old employer called Spider (Wagner Moura) who says he will be able to get Max to Elysium, but only if he first extracts information from the cerebral storage device contained within John Carlyle (William Fichtner) that will give them leverage over the officials presiding over the space station that they need. Turns out Max and his gang were onto something much bigger as Delacourt (an interesting Jodie Foster), the Elysium official in charge of immigration who has made a deal with Carlyle that may or may not unlock more than Spider or Max ever bargained for. Add into the mix a kind of rogue assassin named Kruger (Sharlto Copley) at the dispense of Foster’s Delacourt and you have plenty of obstacles for Max to overcome as he makes his way to save himself and Frey’s daughter. It is easy to see how all of these layers could come together to form a complex story that also takes its cues from issues facing people today and while it certainly does all of this, it does it at the expense of embracing more cliches than finding new ways to convey the ideas.

It is a movie that at once has so much going on while never seeming to delve as deep as necessary or go the road less traveled to make the point it really wants to make. For, as the film opens we are given a fleshed out world, one that is as busy and populated with real people as the makers want to have us believe. We meet Max and we understand he is going to be our lifeline into the film, but we still don’t feel necessarily zeroed in on him as much as we are more thoughtfully watching his story play out among the thousands of people around him that have similar struggles. As the film moves along we get ever closer to Max and more in tune with his emotions as the details begin to get more and more personal. There is such a juxtaposition between the ruined earth and prestigious Elysium that we come to understand why the people of earth resent those on the space station, but is everyone on Elysium as devious and evil as Delacourt? That could very well be interpreted as my opinion coming from the point of view of the one percent, but I assure you that isn’t the case and as it seems the wealthiest of people might be able to afford their stay on Elysium we are never afforded the chance to see any other opinion than that of Delacourt’s. If it is any kind of consolation, President Patel (Faran Tahir) seems to have a much less intense approach to the illegal immigrants, yet is still insistent on keeping them out. Not only would this have been of more interest and creating a more fleshed out world in the space station, but it would have created more interesting dynamics between the haves and have-not’s if the politics of it were more complex than simply allowing for everyone to have what the privileged already do. This kind of simplification is what the movie suffers from as well. Despite Damon playing Max with a strong amount of vigor and having a fierce opponent in the truly charismatic Copley that plays menacing like no ones business, the end result is less than satisfying in that it doesn’t feel earned. There is so much going for the redemption of Max and the other fairly well conceived characters that it is disappointing when there fates don’t seem equal to their journey.

As said before, Damon is always a strong presence and he brings what he can to the somewhat slim arc of being selfish to selfless, but what is most impressive is the ferocity with which he approaches the action scenes required of him. We haven’t seen him be this physical since the last Bourne picture and he really brings it here, especially when captured in the way that Blomkamp has decided to shoot the film. Using a very frenetic, handheld style while down on earth and keeping things on dollys and cranes while overseeing the massive landscape of Elysium. The caliber of the supporting players doesn’t hurt either as both Alice Braga and Copley deliver memorable turns, with Copley obviously having the more meaty role here. Where the performances come to a kind of laughable hamminess though is with Foster. She is doing the Will Smith/After Earth thing where she takes on a strange accent and in turn made it hard for me to take her as a serious authoritative figure. I can’t decide if Blomkamp wanted her to go this route or if he was simply so overwhelmed by the star power Foster has and his relative amateur status as a director that he was too scared to tell her differently, but either way what Foster has done here isn’t something that helps the overall consensus of how I feel towards the film. My favorite part of the film were the science fiction elements as they have created some really interesting gadgetry that the characters are able to use and the production design on the actual space station is beyond spectacular, but ultimately the story and character aspects aren’t as interesting or involving as I expected them to be. The action scenes are fine enough and are surprisingly not as numbing as you’d think given this is another apocalyptic action film coming at the end of summer, but as a science fiction film with something to say, some weight to the story, there is more that goes to waste here than there is to be relished and discussed on the ride home, which is what good science fiction should lead to.