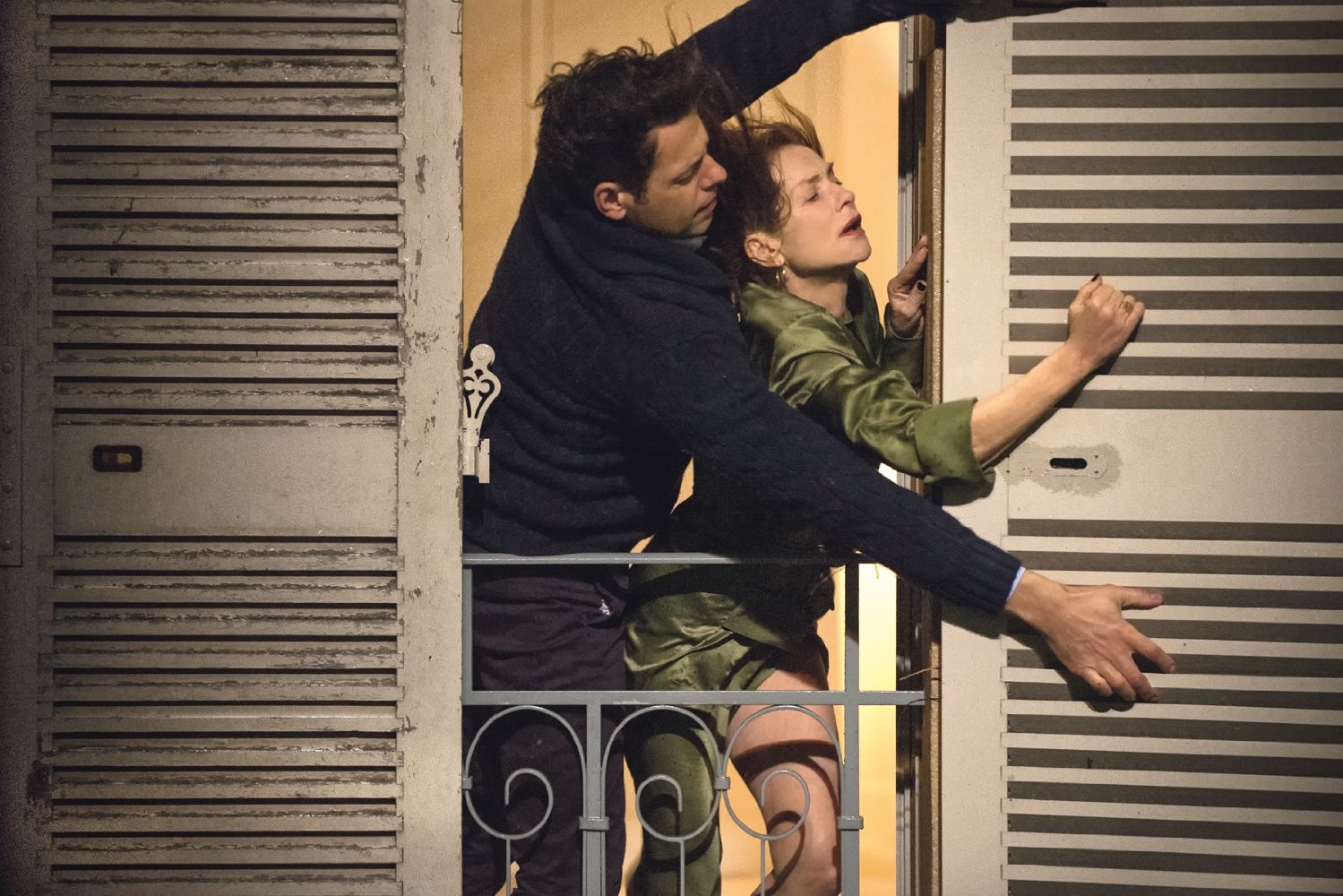 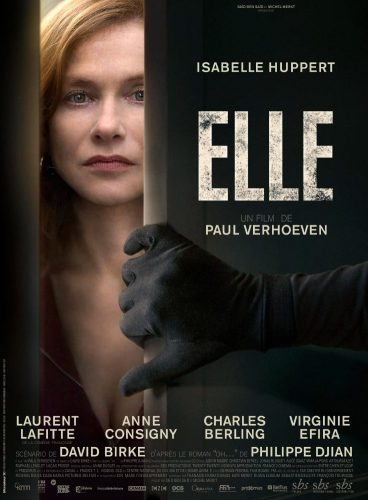 Director Paul Verhoeven will be seventy nine years old this summer, but if his latest film is any indication it seems the filmmaker has no intentions of letting age force him to be more precious. Of course, the danger in this-to prove you’re just as daring or drawn to scandal as you always were-is going overboard in an attempt to defy. Going overboard in ways that can take actions or material from being seen as risky and/or bold to that of pure desperation. With nearly eight decades behind him on this planet one could certainly surmise that Verhoeven has crafted a French thriller concerning rape, betrayal, mystery, and lies upon lies for no other reason than to prove he can still be as shockingly captivating as ever, but such motivation never seems to be the case with Elle. Rather, Verhoeven is clearly only hoping to entertain as much as he provokes. It may seem odd to use the word “entertain” when describing a film that opens with an older woman (Isabelle Huppert will be sixty four this year) being sexually assaulted, but strangely enough Verhoeven opens the film with this shocking act so that the audience isn’t left waiting for what has been sold as the crux of the film. Instead, we are dropped into the middle of the assault and then left to discover how there isn’t necessarily a right way in which women or anyone who experiences such a trauma are expected to respond. In most instances it would seem the victim of as violent and unforgiving an act as Verhoeven documents and David Birke’s screenplay describes would immediately notify the authorities and stay with a close friend or relative in light of being violated in a space they once felt safe, but none of this accounts for how Huppert’s Michèle Leblanc reacts. And Verhoeven never takes the stance that his protagonists’ choices are weird or wrong in any way, but more that they are interesting in the vein of bringing up more layers of this individual’s story thus making the trials and tribulations of Ms. Leblanc all the more compelling and completely engrossing. It’s not often with large-scale dramas or potentially cheap thrillers that the director trusts their audience enough to draw their own ideas or perceptions of the acts taking place, but just as there is no precedent for how Leblanc should react to her singular situation Verhoeven never sets a precedent for how he expects us to respond; simply laying out the facts of the story and forcing us to take them in in whatever horrific, alluring, frightening, or seductive way we ultimately do.

There are many facets to Leblanc. Many sides that need to be understood in order to correctly shape why she responds to her attacker the way she does. She is a wealthy entrepreneur who owns a video-game company with her best friend Anna (Anne Consigny). She is divorced from Richard (Charles Berling), a struggling writer and college professor, whom she still loves. And yet, she is having a love affair with Anna’s husband Robert (Christian Berkel). She’s slightly remorseful about it, but more than anything she seems to be lost in her age and looking for something to make her feel alive again. Her son, Vincent (Jonas Bloquet), is more of a burden than a source of pride for his parents, but the inescapable need to care for her son never leaves Leblanc. Vincent lives with his rather terrible girlfriend Josie (Alice Isaaz) who is pregnant, but we’re pretty sure Vincent isn’t the father. On top of all this, her mother Irène (Judith Magre) who is now bringing up old, ugly memories of her husband and Leblanc’s father whose past remains somewhat shrouded in mystery with details only doled out in specific layers so as to build tension around where this aversion to law enforcement and people in general comes from. That said, Leblanc begins to make friends with her younger next door neighbors in Patrick (Laurent Lafitte) and Rebecca (Virginie Efira) who become more and more present in the life of Leblanc as the film goes on. Then there is the aspect that we might assume might make up the biggest part of who Leblanc is or who she becomes, but instead is more or less the smallest detail in the larger picture of who this titular character is-she was raped by a stranger wearing a ski mask. It happens and Leblanc cleans up the glass that was broken during the scuffle, she discards the clothes she was wearing, and then orders take out as Vincent is coming over for what she expects will be to ask for money. Elle could easily exploit any one of these several plot strands for more melodramatic purposes, but what makes the film and its central character so engaging is that she doesn’t allow any one of these things to define her, but rather she takes what comes in strides and more or less does what she so desires without fear of consequence.

Based on a novel by Philippe Djian the film adaptation is one that uses narrative to its advantage in that not only is it always telling us new information that is critical to understanding the characters and the plot they’re wrapped up in, but that the plot furthers itself with each new scene as well. This may seem like a given, an obvious trait movies should have, but when dealing in as many personal relationships as Leblanc juggles here it would be easy to get bogged down in the specifics of each that could just as easily lead to scenes in which conversations about nothing take place. It is easy to write a conversation between people-we have them all the time-what is difficult is writing conversations between people that serve multiple purposes such as displaying the dynamic between two characters as well as relaying necessary information all while having to sound as natural as possible. Given the film is in French with subtitles such a caveat in the writing process might get lost in translation, but just as with its main character the film takes such a challenge in stride-accomplishing what it needs to accomplish without ever seeming to think of as much as a challenge in the first place. Birke, who has a series of lame and/or cheap horror flicks to his name doesn’t seem like the ideal candidate to bring into such a project, but his experience in that genre might have very well informed how well his screenplay balances the horror of what actually happens to and around Leblanc while rationalizing how she can take such things in such blasé fashion. It doesn’t hurt that both Birke and Verhoeven have an anchor such as Huppert to hang their script and film on though, as she does indeed anchor the film. It would be very easy to kind of make an assertion about the character early on when she doesn’t respond to what happens to her in the first scene of the movie in the way we expect a woman to react, but we don’t. There is an honesty to her decisions that is unfortunate. It’s hard to read whether she is at first embarrassed or ashamed with Huppert undermining the significance of what happened to her by casually tossing out the information at a dinner with her ex-husband, Anna and Robert. To share this information with anyone must be both a liberating and very scary thing to do, but to do so within a group such as this where Leblanc’s relationship with each is more complicated than it at first appears allows the film an edge in how much it sucks us in. It’s the reason it essentially succeeds in doing what it does.

What exactly does Elle do then? It sucks us down a rabbit hole of a personal life that never tends to end up where the clues might indicate its going. It is as unpredictable as real life might seem, but with a particular color palette and a lingering tone that keeps us on the edge of our seat. Verhoeven instills a sense of style without turning this world into a hyper-stylized one. He gently guides the film through each of its main points and sub points that support the larger picture so as to bring together, with Huppert’s performance only elevating the material further, a full-on, fleshed out portrait of this woman. Whether this be in including scenes with her young, mostly make employees who both despise and idolize her or how she so casually goes to the doctor for STD testing after the initial encounter because it is what is necessary. Every element in every scene only builds on top of the previous scene to create this heroine of sorts that, due to her past concerning her father, has created this very independent, very self-sufficient woman who doesn’t need anyone in order to be comfortable, but in the absence of her husband needs someone to make her feel whole in a sense. The relationship with her son has become strained and awkward, she is destroying a decades-long friendship with her best friend and business partner without even seeming to consider the repercussions of such actions, and so when she is attacked while she is naturally repulsed by it, she holds onto it for so long that she begins to consider it in different ways. As cautious as I am to say this though, what pushes the film to territory most wouldn’t care to discuss is how Leblanc more or less is curious as to what might happen were the situation to present itself again. She almost dares it to. And so, when it does-there is a thrilling aspect to it. That feels dirty to even say or to even think of rape in such terms, but these are the kinds of internal, deep dark places that Elle ultimately goes and what more or less keeps us engaged as taking such an angle, if nothing else, promises that what is going to happen is likely not what we expect to happen. Elle is one of those movies that makes for endlessly interesting dinner conversation afterwards as the difference in perspective between men and women alone will be fascinating to hear and that’s on the most basic level-begin to add in factors such as age and life experiences and this is not just a conversation starter, but a film that could warrant multiple topical debates and discussions. It’s good when a movie not only entertains, but creates talking points, makes you think, and delivers approaches to life one might not have considered, but can understand and Elle does all of this and more as if it weren’t a big deal at all.