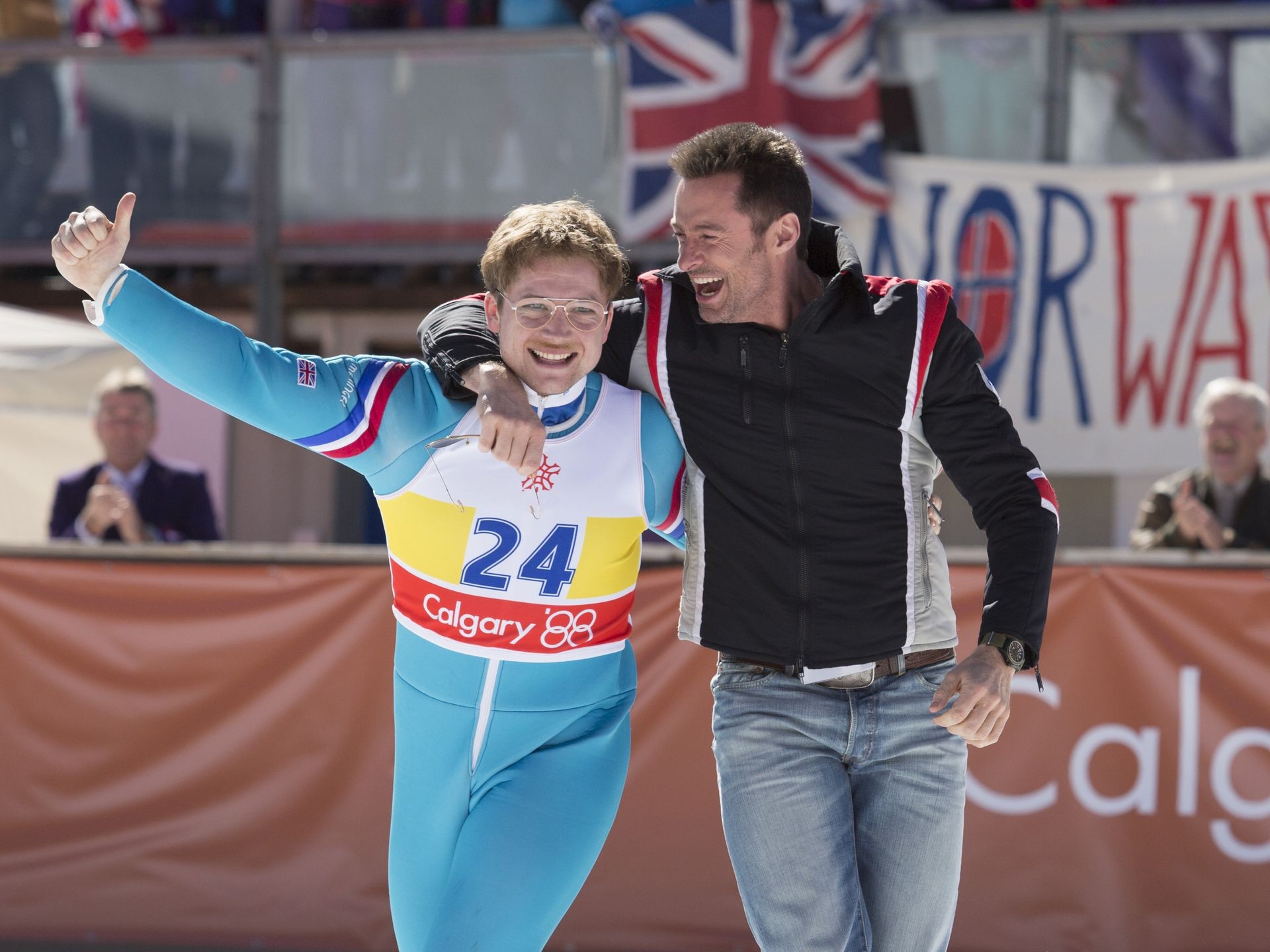 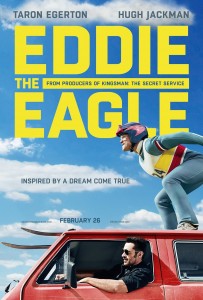 More than anything Eddie the Eagle, a new inspirational sports dramedy not from Disney, gets away with being as cute as it is largely due to the fact it doesn’t come from Disney. Instead, Eddie the Eagle comes to us courtesy of Marv Films, the British production company owned by director Matthew Vaughn (Stardust, Kick-Ass, Kingsman). Vaughn, who surprised no one with the quality of Kingsman last year, but did slightly stun a few with its box office capabilities also discovered Taron Egerton in the process. Egerton cements his rising star status in this somewhat unexpected follow-up for the new collaborators. Fortunately, this direction is an interesting one and the film works as there truly hasn’t been much in the way of a credible sports story as of late where we don’t inherently expect the sentimentality factor to be over the top. With the mouse house not having its hands on this property though we expect something slightly more mature, something a little closer to reality in the ways of the world and while Eddie the Eagle is certainly cute and even somewhat fantastical in certain aspects it never makes excuses for its titular characters shortcomings. Instead, it simply uses those real world circumstances to push our peculiar protagonist further. And thus, the reason Eddie the Eagle succeeds as well as it does despite being pure formula-it understands its hero and it breaks down the walls that people were afraid to climb over in Eddie’s real life introducing us to a fully faceted character and not just a one note joke who can’t take a hint from reality. Yes, Eddie the Eagle is formulaic in every way imaginable as you inevitably know all the beats the film will hit from the training montage down to the late second act obstacle that will be greatly overcome in the third, but it is damn entertaining formula and is made with such affection and honest aspiration one can’t help but to want to cheer for Eddie just as all those at the 1988 Calgary Winter Olympics did.

Even when describing the film as another sports movie inspired by true events it feels as stale as those Cheez-It’s you forgot were sitting in your bottom drawer. Of course, the reason sports movies typically get made is because there is some interesting facet to a game hundreds of thousands of people watch every week and know the rules to. And so, these movies typically display exceptions to those rules, but here is where Eddie the Eagle begins to differentiate itself already. More than not being about a sport people care to watch on a weekly basis, Eddie the Eagle is arguably about a sport most don’t even know exists. Ski jumping is a sport in which the athlete descends a specially constructed takeoff ramp, jumps from the end of that ramp with as much power as they can, and then “flies” as far as possible down a steep, sloped hill. So, not only does the film center itself around an outcast of a protagonist and a somewhat obscure Nordic sport, but it also finds drama and a compelling nature in a sport where that outcast isn’t really competing against anyone but himself given Eddie is Great Britain’s first Olympic ski jumper since 1929. We know he’s not going to win any medals from the get-go, so there’s no tension there-the tension lies in will he accomplish his dream of going to the Olympics or not? Will Eddie achieve an Olympic moment of his own? Of course, given the nature of the story and the fact there is a real Eddie Edwards out there that you can Google and watch YouTube clips of there is no such thing as a spoiler. This makes it all the more crucial for the filmmakers to deliver a final product that conveys this fascinating journey by a fascinating character rather than simply making it about the obvious destination. Director Dexter Fletcher has made two features prior, neither of which I’ve seen, but look to be smaller/indie films strictly distributed in the UK. That said, Fletcher never makes his presence known here, but instead allows the characters and soundtrack to shape the mood and tone of his film. For a filmmaker working with a bigger budget and big movie stars for the first time I imagine it is difficult to remain restrained, but it works to Fletcher’s advantage here as Eddie and his story more than speak for themselves.

We begin in 1973 as we meet ten year-old Michael “Eddie” Edwards (Taron Egerton) who, from the get-go, is an unlikely athlete. Eddie has braces on his legs due to “dodgy knees” and despite constantly being picked last in the forum of school organized sports continues to work his way through the Olympic moments book his parents have given him in hopes of finding a sport he excels at. His mother (Jo Hartley) is a soothing presence that encourages her son to chase any dream he sets his sights on while his father (Keith Allen) is less so. Eddie’s father has made a sustainable living working construction, specifically plastering, and hopes his son will find honest work and honest pay with a more traditional career. There is great momentum from the start though that shows us Eddie is up for something more than the traditional nine to five as Fletcher combines editing techniques and an eighties synth-inspired soundtrack to move us rapidly through the stages of Eddie’s adolescence. It is here that Eddie settles on the sport of skiing. When the film jumps to 1987 though, we meet a twentysometing Eddie who is cut from Britain’s Olympic ski team and is forced to once again figure out how he might make it to the Olympics. Eddie comes to ski jumping given the fact Britain hadn’t had a competitor in the sport since 1929 and he could essentially qualify for the Olympics by default. Of course, if you’ve seen the trailers or looked up any footage of ski jumping you’ll learn very quickly that it’s quite a dangerous sport and that even after Eddie travels to Garmisch-Partenkirchen, Germany, to learn the basics he will still need a coach if he hopes to survive. Enter the rebellious and charismatic Bronson Peary (Hugh Jackman), a once promising ski jumper under the wing of legendary coach Warren Sharp (Christopher Walken) who has since been reduced to a drunkard that finds work in snowplowing the Garmisch slopes, and you have the makings of an odd couple willing to take on the establishment and win the hearts of audiences around the world.

It is in this duo that the movie finds both balance and its battling themes. The overriding arc of the film is the idea that there is no greater motivator than telling someone they can’t, but by providing us with this specimen who garnered fame and attention for not being particularly skilled, but being immensely dedicated and juxtaposing it with this older, grizzled athlete who had all the talent in the world but couldn’t find the drive or love of the sport to save his career the film taps into something more, something about the nature of competition, the right to compete, natural ability, and the culture that cultivates a “fifteen minutes of fame” phenomenon so as to convince ourselves we’re more compassionate than we like to think we are by allowing such loveable underdogs such as Eddie Edwards to experience their dreams if not for only a moment. Eddie may not have been the most gifted athlete, but he was clearly a hard worker and there are no athletes at all, much less great ones, without hard work. And so, it is in this sense that the only thing that differentiates Eddie from those who have been training their entire lives for the Olympics is the fact their natural make-up includes more inherent skill than his. Given they’ve been training their entire lives because their circumstances allowed them to raises the question of whether they’re more deserving of the attention Eddie ultimately receives for only competing in his sport for barely a year before making his Olympic debut and on something of a technicality at that. Writers Sean Macaulay and Simon Kelton hint at this conundrum of who deserves what and even show that Eddie is well aware of his sideshow status, but they defend their hero by going back to the words of the founder of the modern Olympic games, Pierre de Coubertin, who said, “The most important thing in the Olympic Games is not winning but taking part; the essential thing in life is not conquering but fighting well.” If this quote is to be taken as some type of credo for Olympians to live by then it’s hard to argue that Eddie doesn’t completely personify this sentiment given his never say die attitude. And it is in that mentality that Eddie wins us over as well, despite his conventional and clichéd road to glory he nonetheless remains inspiring especially when seen through the magic of the movies.

You can also now check out my new film review show called INITIAL REACTION. Look for a new episode each week. Here is our review of Eddie the Eagle: