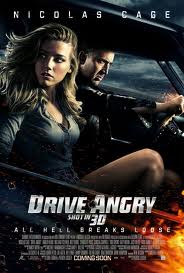 Drive Angry director Patrick Lussier has worked on many well known horror films, including the Scream trilogy and most recently My Bloody Valentine, the first horror using the ‘new-age’ 3D technology.

Drive Angry centres around Milton (Nicolas Cage) who after escaping from hell attempts to hunt down the men who killed his daughter. With the help of Piper (Amber Heard) he chases down the responsible religious cult, led by Jonah King (Billy Burke), all the while escaping from The Accountant (William Fichtner) who has the responsibility of bringing Milton back to hell.

A typical recipe for a revenge movie with one or two differences, so chuck in some OTT 3D, one or two average actors along with Nic Cage and what we got here is a delicious looking action thriller. Well for the first five minutes we do… the action is fast paced, the 3D is over-the-top and the clichéd lines are drilled into us, exactly what we wanted, time to switch off Expendables style and enjoy the film. Then all of a sudden, nothing. No more, angry driving, angry lines or even angry 3D.

For a film entitled Drive Angry 3D you would expect one of those elements to make up a larger slice of the film. In fact, the car Milton is driving is wrecked almost instantly and it becomes more ‘Hitchhike Pleasantly’ than anything else. So a driving film without any real driving and a lack of any action or deaths for 80% of the film. Imagine Speed without the bomb laden bus or The Titanic without the iceberg, it’s just a bunch of people killing time more than anything else.

We then meet Piper (Heard) and see her show off her assets rather than her acting. The screenwriting is terrible, even for something that was never intended to be taken seriously; even the badass lines aren’t witty or even cheesy enough to be enjoyable. The film is so dire, it won’t be referred to as ‘so bad its good’ by anyone, it’s just so bad. There’s even a terrible Shoot ‘Em Up style sex scene which just involves a lot of crying and numerous dead Latino’s.

Surely then, Nicolas Cage, star of Con Air, Raising Arizona and Gone in 60 Seconds, can reclaim some level of respect for the film. Other than one or two moments of humility when discussing the story behind his daughter’s death, he lives upto his recent ‘sell out’ tag with fantastic ease. Awful lines, terrible ‘angry’ poses and glares, it’s almost as if the writers told him to go nuts and improvise his lines.

Okay, so the story is un-original and delivered with some non-existent acting. Maybe the $50million budget allowed for some decent visuals to make up for it. However, as I have already mentioned, the first five minutes were passable, therefore judging by the rest of the film, I can assume that 90% went on Cage’s wage then the remaining 10% then went on paying for advertising, the rest of the cast, cost of filming, the cars used at the start and David Morse’s cameo. So overall that

leaves…oh, around about nothing for the special effects, yes that seems about right. The point in which this is driven home with eye-gauging effectiveness, when The Accountant( Fichtner), heads towards a police road block in a tanker that is marked HYDROGEN in big bold letters. That doesn’t seem SO bad, but it’s when you realise the rendering of the truck onto the screen makes it seem as if someone is picking up a model truck and moving it each time, whilst making ‘VROOOOOOM’ noises.

I’m hard pressed to find anything decent about this film, a first for me; even The Last Airbender had decent special effects at times. So I suppose if I have to dig really deep, The Accountant is a decent concept rather than actual addition, Fichtner is not used nearly enough and when he does get screen time, the film is over. The first five minutes offer some points of interest, but the remaining ninety-five succeeded in wiping that from my memory along with the previous 72 hours of my life. That’s about it, for a movie with such a big budget I’m ashamed to say it, but it offers so little in the way of memorable lines, scenes or performances that I just can’t point out one area that excelled. Other than the credits, which I don’t mean in an ‘Oh the credits were funky looking at least, with decent music’ kind of way. No, I mean the actual point of the credits was the best part, to signal the end of the film and the beginning of the rest of my life.

Throughout the previous sections, I somewhat craftily (ahem) put in some cooking metaphors here and there to help me sum up the ‘film’ that was Drive Angry 3D. Just think of a loaf of bread without self-raising flour or yeast, you wait for an hour and nothing happens, so you wait a while longer and all you are left with is a burnt pancake that has only managed in stinking up the place and depressing everyone who expected a decent bite. The film falls so flat it might as well have never happened.

This film isn’t as the trailer suggests a ‘throwback to grindhouse cinema at its finest’ It’s not even a throwback to cinema in general, Drive Angry 3D spectacularly fails in almost every category you can think of. A massive let down on all fronts, even the promise of ‘mind-blowing 3D’ is never justified at any point after the first few scenes, where they forget the film’s title. Drive Angry 3D should be renamed Crash and Burn, as that’s exactly what it does