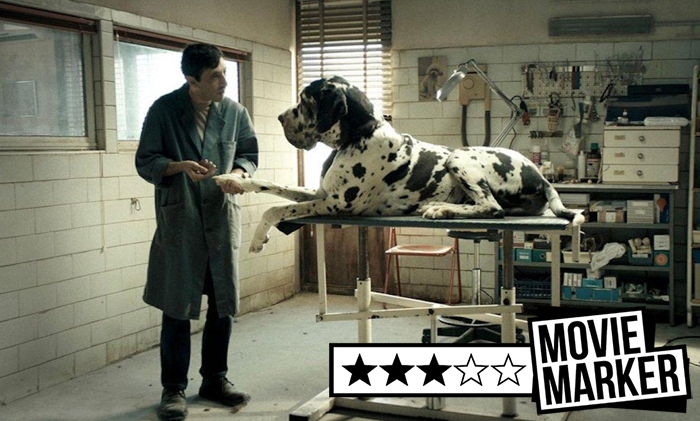 Dogman is the anti-Paddington. Antithetical to the marmalade-loving bear’s enduring mantra – “if we are kind and polite, the world will be right” – dog groomer Marcello (Marcello Fonte) carves out a life in the dilapidated outskirts of Rome modestly tending to his estate’s canine residents and enjoying the respect of his neighbours.

But Marcello’s submissive, accommodating kindness is pushed closer and closer to its limit by the hulking Simone (a terrifying Edoardo Pesce, surely masked in near-mutant prosthetic), a brutish ex-boxer who stalks the estate terrorising the residents. Unable to say no to a friend, Marcello facilitates Simone’s egregious coke habit to little recompense.

When Simone’s scheme to rob a nearby jeweller’s implicates Marcello and he is apprehended by the police, the Dogman takes the fall himself and goes inside for a year for the sake of the bully who pretends to be his friend. When he comes out, something has changed.

Marcello, diminutive and always sporting a toothy grin, strikes an unimpressive, but likeable figure. He is perfectly happy with his lot as the film opens – a divorced father who takes pride in his work and loves trips to the beach with his daughter. While director Matteo Garrone makes a meal of the grim, filthy aesthetic of the film’s setting, he peppers in moments of levity and blissful tranquility to reinforce the humble satisfaction of Marcello’s daily life.

To see him repeatedly indulge the cruel, selfish whims of Simone quickly becomes a source of frustration, as the brute encourages vices in Marcello that seems entirely at odds with his persona. Marcello is swept away on break-ins and hedonistic strip club nights in jarring scenes more in keeping with Garrone’s work in the gangster canon such as 2008’s Gomorrah.

In these scenes, the toxicity fuelling Marcello reveals itself. Fonte delicately skews the kindly facade when Marcello enters Simone’s world. Behind his courteous smile is a sickening glimmer of delight – Marcello loves the thrill and decadence of life of crime. His latent desires mix with his better nature, to create something more insidious than Simone’s overt depravity.

Dogman stumbles in its closing chapter as Marcello is released from prison, returning to a community who despises him for violating their trust and chasing Simone’s false offers of brotherhood and fortune. Marcello reemerges not exactly changed, but more honest to himself about what he is. Garrone and his co-writers steer this portion of the story with a steady hand, but it is hard to shake comparisons to other established squares-gone-rogue like Walter White.

Marcello’s resolve and vengefulness is convincing thanks to Fonte, but its emergence is sudden and teeters dangerously close to cliche. His push and pull with Simone is rote, which makes its languid pace a little irritating – this has suddenly become a very different film, and it can’t carry the slower moments of contemplation as well as it could before Marcello was locked up.

An inevitable confrontation takes place, bursting with brutality and gore. But rather than a release of tension, it feels like a betrayal of the thoughtful, measured character piece Garrone set up. The violence overreaches for shock value where Garrone had before been satisfied with something more pensive and empathetic.

Luckily, he pulls back in the final moments of the film and dovetails elegantly by concluding what is essentially his thesis on ‘little guy’ psychology. He frames Marcello not as a good man pushed too far, but as someone whose better and worse natures are intrinsically tangled to create a monster very different to the bully who ultimately leads him to snap.

No matter how kind and polite the Dogman might try to be, he cannot deny the malice that festers in his heart – and Garrone artfully distills Marcello’s melancholic final moment of self-realisation in a resonant closing shot that gracefully irons out the kinks in this curious, inconsistent little film.

Related Topics:DogmanMatteo Garrone
Up Next