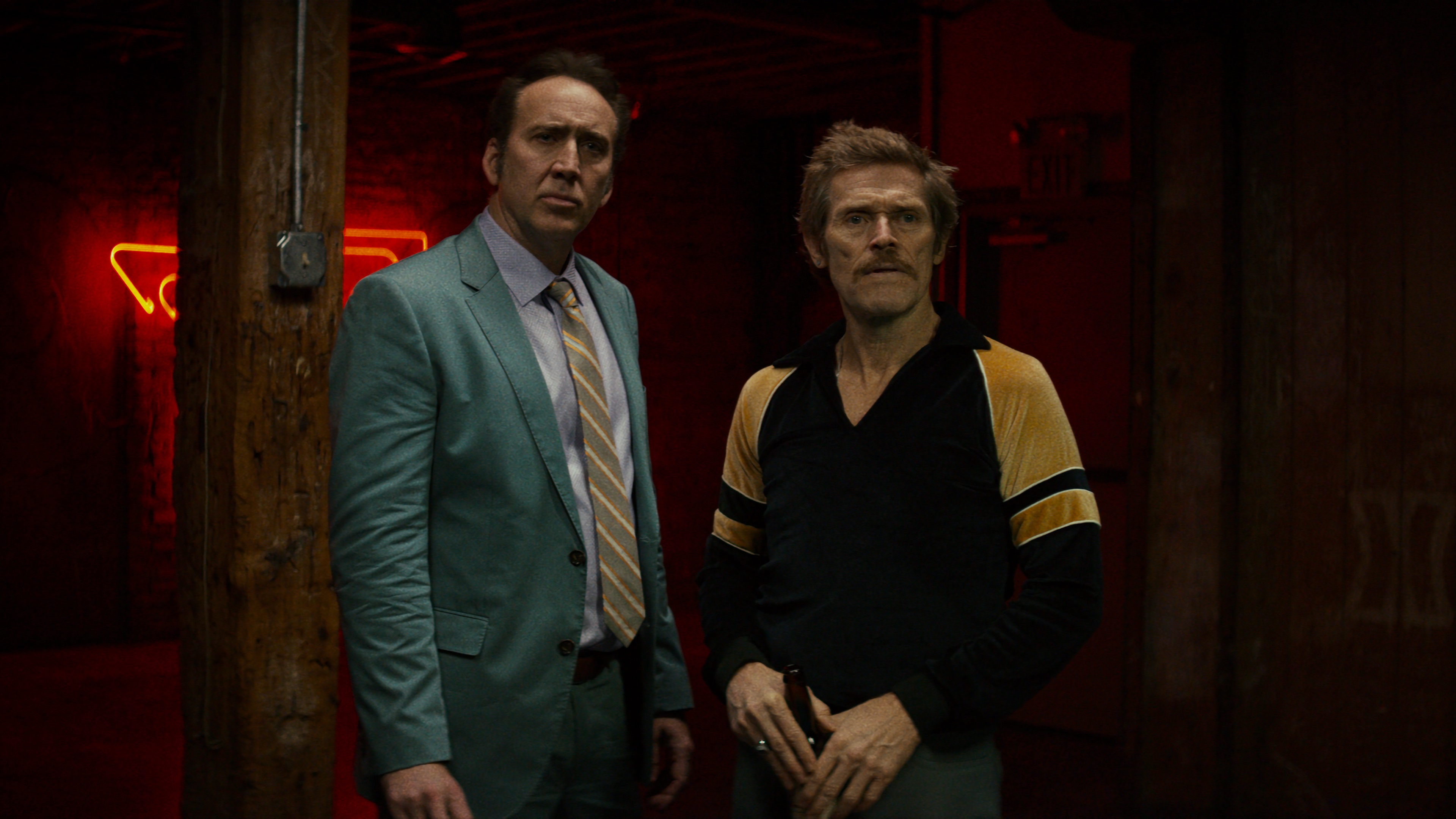 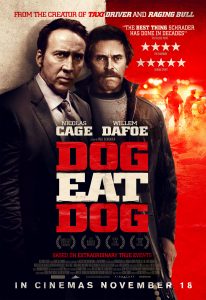 The bad old guys are back in town.  The man behind ‘Raging Bull’ and ‘Taxi Driver’ (slated for a re-release in early 2017), Paul Schrader.  One of his most frequent collaborators, Willem Dafoe.  And Nicolas Cage.  Back in a film that deliberately sets out to defy description.  There’s nothing like a challenge!

‘Dog Eat Dog’ is the story of three crooks, each with two strikes against them.  The most recently out of prison is Troy (Cage) and cohorts Mad Dog (Dafoe) and Diesel (Christopher Matthew Cook) have been waiting for him because he’s the front man, the one in the suit, and they all need to make some money.  Legal methods just don’t cut it, so the shady El Greco (Paul Schrader) puts some work their way, but it’s all blown on drink, cocaine and gambling.  So he gets them something more lucrative – kidnapping the baby of somebody up to their neck in debt ……

Straightforward, then?  Not really.  Which is made apparent by the pre-credits sequence, with Dafoe holed up with his girlfriend in her totally pink home and dealing with telephone sales calls in a temptingly abusive way.  What happens next sets the tone and style of the entire film.  Violent, bloody, grotesque, over the top, designed to shock and outrage …..  There’s no barriers, no holds barred.  Yet, despite knowing that what you’re watching and hearing is deliberately offensive, despite the occasional queasiness in the pit of your stomach and the pervading sense of wondering WTF is going on, it still manages to keep you watching.  Perhaps it’s the anticipation of the unholy trinity messing up spectacularly.  Or perhaps it’s the way it takes the proverbial out of itself and, even more enjoyably, the way Cage sends himself up something rotten.  You’d swear there’s a twinkle in his eye.

As the director, although not the writer this time, Schrader has given us a live action cartoon, behaving like a kid in a cinematic sweetshop.  He plays around with the palette – sometimes black and white to underline the noir elements of the story, sometimes colour – and indulges in flashy camerawork.  Literal fast forwards, and the camera apparently moving from room to room through the walls fall just short of having a billboard proclaiming “Look, Ma, I’m being clever!” hanging over them.  In fact, if he had included them, it’s unlikely the audience would have batted an eyelid, but he doesn’t need to show off to that extent.  He also makes an appearance in front of the camera, in a role that he offered to a number of big names, including Michael Douglas, Nick Nolte and Christopher Walken but, to use his own words, he was “the only actor we could afford.”  Which says a lot.

With its noir references – Cage has a thing about Humphrey Bogart and also does a passable impersonation – there are times when you think you’re in for a pastiche of another film.  ‘Three Men And A Baby’, anybody?  And, with the exception of Cage, all the crooks use names that are clearly fictional, harking back to the stories of Damon Runyon.  But this is no ‘Guys And Dolls’ and there certainly isn’t a potential musical lurking.  But, if you can handle the blood and the language, the entertainment value here is above average and there’s more than a few laughs, even if they are of the outraged variety.

As for defying description, there is a word that fits, one that starts with the name of Dafoe’s character.  Madness.  Nuff said.

Fantastic Beasts And Where To Find Them