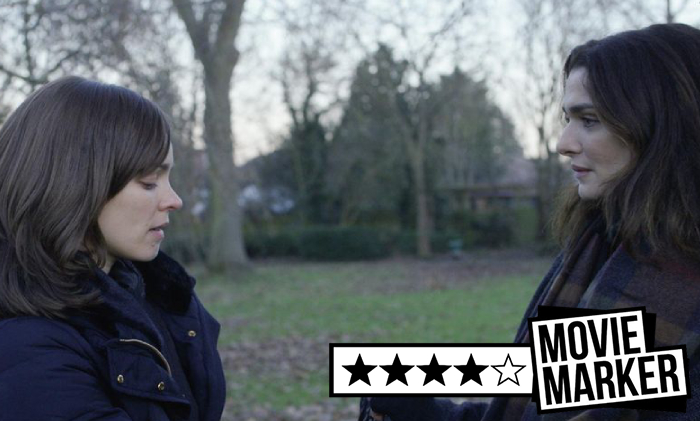 A death stirs up the unresolved past in a grey North London suburb. Photographer Ronit flies home from New York for her father’s funeral to find herself erased from his life. She has been away 15 years, a wayward daughter who long ago had left the Orthodox faith she had grown up in.  She makes herself uneasily at home with a childhood friend, Dovid, who welcomes her warmly after a moment’s hesitation. If his initial awkwardness seems caused by the surprise of seeing a long-lost friend suddenly on his doorstep, other reasons soon become apparent.

Dovid is heir apparent to Ronit’s father, like him a highly regarded rabbi. He is passionate about his faith, and committed to his position in the community.  Ronit soon discovers, too, that he has long been married to her childhood friend, Esti. The three had formed a close bond when young. Their reformed triangle in the marital home creates ripples in the community, and puts Dovid’s position as a rabbi in question. It also upends their lives.

Based on Naomi Alderman’s first novel about the North London community she had grown up in, a novel she had written while still practising Orthodox Judaism, Disobedience reveals how one can long for what one also wishes to escape from. The community and rituals are as comforting and beautiful as they are stifling. Ronit is truly at home even if uneasy, and her unease is something that Esti and Dovid live with too, in different ways. They are childless in a world of large families, and while they comply with the rigid rules of Orthodoxy, they reveal in their work- Esti as teacher and Dovid as rabbi – a rich openness to things being otherwise.

As the days of mourning continue, much of what had been left unresolved before Ronit’s flight to New York years ago comes to the surface. Filial regret, family ties, and repressed passion. The heart wants what it wants. Dovid has, not entirely unknowingly, invited in the catalyst who would upend everything and alter his relationship to what had been so far his life’s work. And this is to some degree the structural difficulty of the story, because his internal struggle seems far more nuanced and interesting than Esti’s or Ronit’s, and he has the furthest to go emotionally.

His position in the community and his purpose in life are drawn in much greater detail than his wife’s or friend’s. It is not clear enough that it is Dovid’s wife, ultimately, who has the most to lose.  Almost everything about Esti’s character turns out to be underwritten. Her sexuality is mostly communicated through expository dialogue, her ties to her community are only cursorily drawn. Her strength is the way in which she, though quiet and unassuming, ‘frum’ as per custom, remains equal to herself. Both her compliance and rebellion come from internal moral strength and principled choices.

What is beautifully drawn in Disobedience is the multiplicity of ways in which people observe their religion while being part of one community.  Not all are rigidly devout but all coexist. Those different measures of freedom become visible at a family meal, when Ronit visits her aunt and uncle and difficult conversations inevitably arise. The pleasure of the film is in its nuances, the shades of grey, the compromises that must be made to try and lead a good life.

Another pleasure of the film is seeing those drab, grey winter skies over Hendon, the North London streets of semi-detached red brick houses. Danny Cohen’s cinematography captures a certain dullness to the light which is also the dull ache of living a life where longing has been denied for too long. The very specific context of the story feels also something universal.

There is a very particular mood to this which is rarely intentionally portrayed in recent films set in London. One has to go back to the 1960s to fully get this kind of mood in London film and it is perhaps not surprising, because Disobedience is set in a bubble where time has slowed down and where mores shift – or crumble – very slowly. That shift is evident in Dovid. He has been groomed to be a patriarch, but in his heart of hearts cannot bear to be that. Rachel Weisz, Rachel McAdams and Alessandro Nivola turn out captivating performances because of the subtlety with which they portray the unravelling of rigid lives through the good sense of being, above all, compassionate and loving.