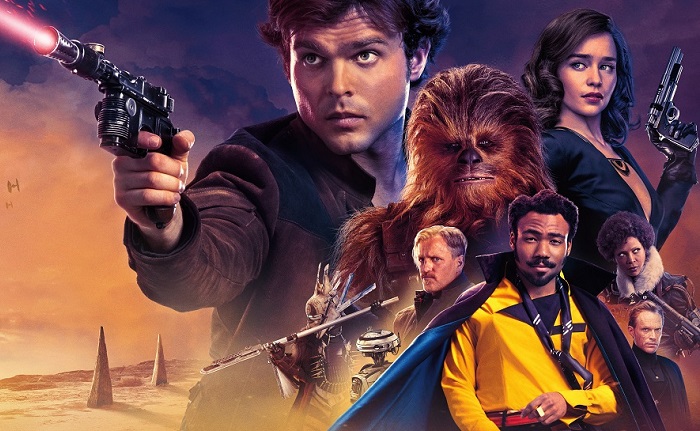 With Solo: A Star Wars Story cruising towards its home release next week, Disney CEO Bob Iger has finally opened up about the film’s less-than-stellar box office performance, which saw the feature garner just $392 million worldwide.

Now, those aren’t poor numbers by any stretch of the imagination – most indies would kill for just 1% of that – but they’re not even mid-tier Marvel takings (Ant-Man grossed over $500 million, and I defy you to find one person to whom Ant-Man is their favourite film). Furthermore,  compared to other recent efforts from the galaxy far, far away (The Force Awakens – $2bn; Rogue One – $1.05bn; The Last Jedi – $1.3bn), well, they’re not quite in the same league.

When Solo hit to a meek audience reception it seemed that every critic, pundit and even rival studio head had a theory as to why – was it too soon after The Last Jedi (which had released just five months prior)? Was it down to the recasting of one of the most iconic roles in cinema? Was it due to the negative fan backlash from a small vocal minority of Star Wars fans following Rian Johnson’s creative decisions? Was it the one-two punch of Deadpool 2 and Avengers: Infinity War financially-draining audiences in the weeks running up to Solo’s release? Or was it simply bad luck?

Well, despite not mentioning Solo by name, Bob Iger seems to think it was simply a case of Star Wars fatigue – overloading audiences with too many adventures too soon. Considering the usual 3-year gap between instalments, the one-a-year schedule Disney has been adhering to since 2015 does seem a tad much. But here’s what Iger said during an interview with The Hollywood Reporter:

“I made the timing decision, and as I look back, I think the mistake that I made – I take the blame – was a little too much, too fast. You can expect some slowdown, but that doesn’t mean we’re not gonna make films.”

As it stands, the only other Star Wars movie officially slated for release is 2019’s Episode IX, which will reportedly close out the so-called Skywalker Saga that began all the way back in 1977. As for what comes next? According to Bob: “We are just at the point where we’re gonna start making decisions about what comes next … But I think we’re gonna be a little more careful about volume and timing. And the buck stops here on that.”

There’s an 18-month gap between the theatrical releases of Solo and Episode IX, and Bob Iger (with Disney) is clearly hoping that will be enough of a breather to allow audience anticipation to build back up for director JJ Abrams’ closing chapter.

Solo: A Star Wars Story is due for release on DVD, Blu-Ray and 4K this Monday the 24th of September, rated 12A.

‘The Walking Dead’ Movie in the Works